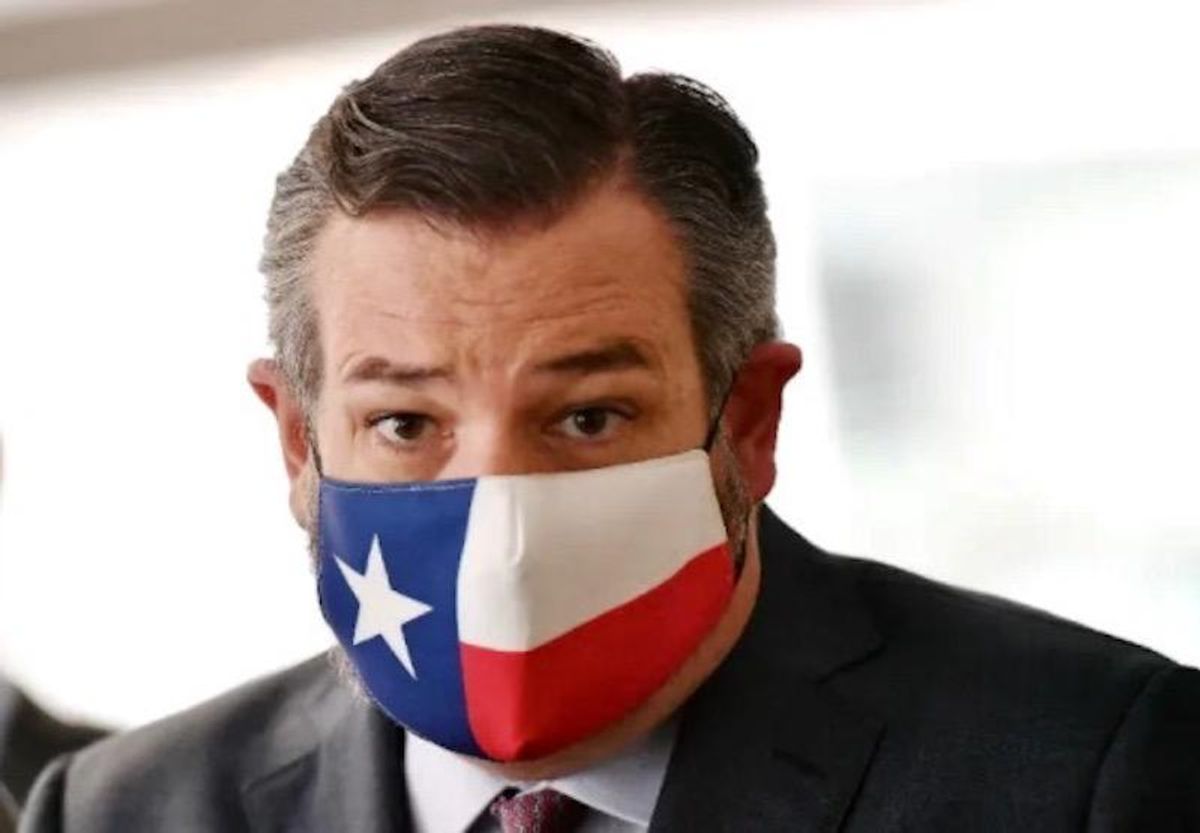 By any reasonable standard, the disaster in Texas, as winter storms break the backbone of basic utility services and leave millions to suffer, should be the death knell for conservative ideology. It's evidence of how wrong Republicans are on two of their most important beliefs: That climate change is a hoax best ignored and that government disinvestment and deregulation will magically lead to better services as the private sector fills in the gaps. And as many progressive analysts, energy experts, climate scientists, and Democratic politicians have been pointing out, the catastrophe in Texas proves that the U.S. government needs to move swiftly on two fronts that Republicans hate, climate change mitigation and public sector investment in infrastructure.

To add to the political humiliation of Republicans this week, Sen. Ted Cruz of Texas made a spectacle of himself by abandoning his frozen state to fly to Cancun, Mexico for a vacation. Aided by Cruz's own unique loathsomeness as a human being, the story spiraled as a crystalline illustration of Republican neglect and even malice towards the people they're elected to represent. The gleeful dunking on Cruz got to the point where even the dog his family left behind, aptly named Snowflake, became a meme for balefully gazing out a window at a New York magazine photographer.

Snowflake was left at home while the senator and his family slipped away to Mexico https://t.co/mBzaZpwCIR
— New York Magazine (@NYMag) February 19, 2021

The situation in Texas is so bad that it started to feed progressive fantasies that this might actually be the moment that Republicans start to pay a political penalty for years of neglecting basic governance duties in favor of endless culture war politics and liberal-baiting.

"Weather might be the least controllable force a politician faces, but it comes with a severe price for mishandling its consequences," Jeff Greenfield wrote Friday morning at Politico. "And it's not clear that Cruz, despite a quick return home, will be able to dig himself out." Jamelle Bouie of the New York Times tweeted, "not to make a prediction but i really don't think cruz is talented or charismatic enough to come back from 'went to cancun while his constituents froze to death,'" before hastening to add, "i'm not even saying a democrat will beat him," so much as "a few high profile texas republicans who have the juice to run a primary campaign."

But I would not be writing the eulogies for Cruz's political career just yet.

Donald Trump had a similar journey with the coronavirus pandemic, not only failing on the policy front but also illustrating his own recklessness to the country by becoming sick after hosting a superspreader event at the White House. But rather than lose Republican support, Trump actually gained 11 million voters over his 2016 performance, only losing to Joe Biden because Democrats improved their turnout even more.

Republicans have mastered the art of turning their own failures as leaders into a story about how it's the government that's the true problem — not their deliberate mishandling of it.

The expansive right-wing propaganda machine gets to work exploiting every catastrophe caused by Republican neglect and using it for a morality play about how government itself can never be trusted to handle important responsibilities. As such, their audiences are encouraged to vote not on the basis of policy, but instead to elect politicians based on culture war politics and trolling liberals.

We're already seeing this strategy play out with Ted Cruz. Rather than throw him under the bus for this optics failure, conservative pundits are rushing forward to argue that taking a vacation is exactly what a senator should be doing in the middle of a pandemic and historic energy outage. They've mocked criticism and people who expect government leaders to take responsibility during an infrastructure failure. Right-wing pundit Erick Erickson kicked it off with a tweet complaining that it was stupid of people to imagine a U.S. senator "can do anything about a state power grid," and mocked the belief that politicians have power in these situations as "the ignorance of so many people who cover politics." On his program, Ben Shapiro snarled that the crisis is not something Cruz "can do anything about" and pretended people were asking him to "go there with, like, a blowtorch and start defrosting all of the pipelines."

There are, of course, many things politicians can do. As many liberals pointed out on social media, a lot of Democratic politicians are hustling to get aid to people in Texas, even ones like Rep. Alexandria Ocasio-Cortez, who represents New York. More broadly, however, there's plenty Cruz, as a senator, could be doing to leverage this crisis to push for policy. For instance, he could be backing the Green New Deal, which tackles the twin problems of decaying infrastructure and climate change at once. No blowtorch skills required.

But this is what Republicans are good at doing: creating crises and then using them as evidence that politics is useless for anything but for whining about liberals.

Tellingly, many liberal commentators who mocked Cruz's trip on Twitter suddenly saw their mentions fill up with angry conservatives accusing them of "ignoring" the story of New York's Democratic governor, Andrew Cuomo, screwing up his handling of the coronavirus pandemic. This was, of course, hypocritical coming from the COVID-is-a-hoax crowd, but also flat-out untrue. Salon's Igor Derysh, for instance, was on top of this story, even before the mainstream media got hold of it. (Needless to say, if it weren't for the "fake liberal media" coverage, none of these fools would have even heard about Cuomo's failures.) A quick Google search uncovered that the talking point was being disseminated from professional troll Donald Trump Jr., who, under his blue check mark, whined that "blue check Twitter" wasn't focused on "Gov Cuomo's lies, coverups, and strong arm tactics that killed thousands."

Setting the dishonesty, which is built into all conservative communications, aside, however, what we get is a fairly sophisticated propaganda effort to leverage Cruz's bogus journey into a larger Republican narrative about how all government is bad and will fail you. The point of conservatives harping on Cuomo's failures is not to encourage better governance. These are, after all, the same people who applauded Trump encouraging people to get COVID-19. The point is to sow the narrative that there's no such thing as a competent politician and that Americans therefore should vote based on trolling-the-liberal skills rather than on competent governance.

Of course, this is classic cherry-picking. Cuomo's failures aren't the failures of the Democratic party generally, as evidenced by the quiet successes of Democratic governors such as Gretchen Whitmer of Michigan and Andy Beshear of Kentucky, much less the rapid turnaround of federal competence under President Biden. But that hardly matters, since the point is propping up Republican voters in their desire to believe good government isn't possible. Which, in turn, justifies voting for politicians not on the basis of their governing skills, but how good they are at trolling liberals and whining on Fox News. And when it comes to those skills, Ted Cruz has few equals.