Fed up and fired up: Texas Republicans meet in a climate of mistrust, conspiracy and victimhood

Eric Neugeboren The Texas Tribune
Delegates listened to proposed amendments to the legislative priorities list during the 2022 Texas State Republican Convention on Saturday. Credit: Briana Vargas for The Texas Tribune
HOUSTON — The Republican Party of Texas has controlled every lever of state government since 2003, and notched major victories last year on voting, redistricting, abortion, school curriculums and other long-held priorities. Delegates at the party’s convention this week expressed confidence that their party will retake at least the U.S. House this November, and said the end of abortion in Texas is all but settled.

But the mood was not celebratory. The Texas Tribune spoke to more than 25 attendees who described feeling besieged by a culture that is increasingly anti-family and anti-Christian.

Above all, attendees said they were fed up. Fed up with elections they believe are rife with fraud. Fed up with their own politicians — including U.S. Sen. John Cornyn, whom they rebuked for taking part in bipartisan talks on gun legislation — for being open to compromise with Democrats. Fed up with the persecution of Christians with traditional values. Fed up with a credulous mainstream media that spouts liberal talking points and disdains anyone who disagrees as racists or bigots. Fed up with undocumented immigrants, even those fleeing war and poverty, for taking advantage of public benefits. Fed up with the education of their children, especially on matters of history and race. Fed up with experts, starting with Dr. Alfred Kinsey, who they said are “sexualizing” students before they’ve hit puberty.

“The enemy is coming in and trying to change our society, change the very fabric of what made America great and they're doing it by going to the children,” said Conny Moore, a 75-year-old retired pharmacist and pastor.

Among elected officials speaking at the convention, U.S. Sen. Ted Cruz stole the show, receiving standing ovations on Friday as he thundered against “radical leftists” driving a cultural assault. 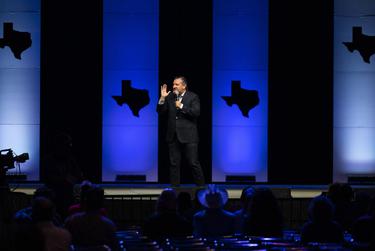 This was a crowd familiar with The Great Replacement, the theory that immigrants are being used to replace white, native-born Americans, and The Great Reset, supposedly a plan by global capitalists meeting in Davos, Switzerland, to impose their environmental and social goals on the world economy and restrict what people can eat and own. Fox News did not come up much; One America Network and NewsMax seemed far more influential.

Conspiracy theories abounded. Anne Meng, a middle-aged nurse-practitioner in The Woodlands, said she believed the May 24 massacre at Robb Elementary School in Uvalde was “a ploy by the government,” and that “cops were told to stand down.” (The police delay in confronting the gunman, who killed 21 people, has been widely criticized.)

Tammy Lake, 52, who lives in another Houston suburb, Magnolia, and is a senior sales engineer for a software company, said she believed that Donald Trump would be rightfully restored to the presidency “by the end of the year.” She did not specify how.

The resolution declaring that Biden “was not legitimately elected” as a result of “substantial election fraud in key metropolitan areas” in five states — presumably, Arizona, Georgia, Michigan, Pennsylvania and Wisconsin — passed without any real debate, a sign of how powerful Trump’s unfounded claim of a stolen election continues to resonate with the party faithful.

Chris Corbett, 66, a member of the party’s legislative priorities committee, was attending his sixth party convention. He said the state party once revolved around limited government and free markets but has become more culturally oriented, he said, as voters awaken to the threats to their values.

“We're seeing a lot more cultural conservatism happening, it's a little more populist,” said Corbett, who lives in Flower Mound and is a writer and researcher for public policy and nonprofit groups.

Much of the cultural issues attendees and speakers railed against dealt with the LGBTQ community, in particular transgender individuals.

Gov. Greg Abbott, who is seeking re-election in November, called on child-welfare investigators to look into families that have allowed their children to seek gender-affirming care, including the use of puberty blockers, against the consensus of major medical associations.

But this was not a convention enthusiastic about established knowledge. The crowd cheered Robin Armstrong, a Texas City doctor who has given patients unapproved COVID-19 treatments, including hydroxychloroquine. Its platform describes homosexuality as an “abnormal lifestyle choice,” a view that has faded in much of America. The platform described gender dysphoria as a rare mental illness, a position not backed by mainstream psychiatrists or pediatricians. 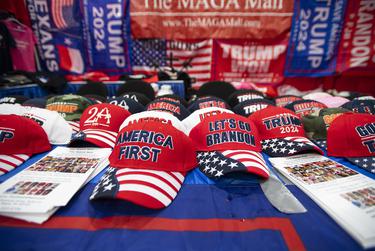 Hats for sale at the MAGA Mall booth during the Republican Party of Texas 2022 convention in George R. Brown Convention Center Friday, June 17, 2022, in Houston. Credit: Justin Rex for The Texas Tribune 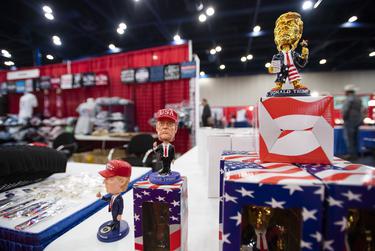 Merchandise for sale at the Texas State Republican Convention in Houston on Friday. Credit: Justin Rex for The Texas Tribune

Vincent Gallo, 60, the owner of a small construction company in Denton, said Democrats and some Republicans are engaged in a “redefinition of reality” by accepting transgender individuals and calling on others to do the same.

“That is being pushed on to other people through the guise of diversity and inclusion,” Gallo said.

The teaching of critical race theory, an academic approach to the study of racial inequality, was also a main concern among attendees.

“The whole principle of what you're teaching is a plot to put our people against each other, and to place the emphasis on the wrong things,” said Moore, the retiree from Borger.

Throughout the week, attendees gathered in sessions focused on these cultural issues. One was titled “Threats to Families — Institutional Policies Adversely Impacting Children and Families — What’s Next.” Another was called “Defeat Critical Theory, Marxism and the Sexualization of Our Children.”

Attendees were also in lockstep in their views on election integrity. Several said that in-person, watermarked, hand-counted, sequentially numbered paper ballots were the only trustworthy way to conduct an election (even though delegates themselves used Scantron ballots to vote on the platform planks, and the results won’t be known for days until the ballots are tallied in Austin).

The convention included three screenings of “2000 Mules,” a movie that relies on discredited evidence to claim there was widespread fraud in the 2020 election. Several attendees floated conspiracies about ballot harvesting, election machines and mail-in ballots. On Friday, Lt. Gov. Dan Patrick said his priority when the Legislature returns next year is to “restore voting illegally from a Class A misdemeanor to a felony.”

Attorney General Ken Paxton also defended his lawsuit challenging the election results in four states that voted for Biden. The U.S. Supreme Court rejected the lawsuit for lack of standing.

“We didn’t win,” Paxton acknowledged on Friday. “To this day people hate us for what we did. But I can tell you what. If I had to do it all over again, I’d do it just the way we did it.”

Paxton’s comments drew cheers from the crowd — a reflection of how much the party loyalists value their leaders fighting for them, even if the results don’t go their way.

“Candidates, you need to fulfill your job and your pledge is to serve the people, not your own agenda,” said Gary Hulsey, 68, an engineer from Haslet.

Not everyone supported the extreme partisanship on display.

“Trying to find bipartisan commonality within the party, that’s his right,” Patricia Almond, 57, a retiree from Porter, said of Cornyn. “As Republican voters, we have freedom of speech as well, but it doesn't do anything to bring the party together.”

One delegate, David Gebhart, urged against a plank calling homosexuality a deviant lifestyle choice. “We are the Republican Party of Texas, not the Westboro Baptist Church,” he said. His motion was rejected.

Another delegate, Robert Bartlemay, balked at the resolution declaring Biden’s win illegitimate, saying the G.O.P. should look forward and focus on electing a Republican president in 2024. People around him booed and hissed.

The prediction that perhaps most united the delegates was that this November’s midterm elections would be a bloodbath for Democrats.

This article originally appeared in The Texas Tribune at https://www.texastribune.org/2022/06/18/texas-state-republican-convention/.