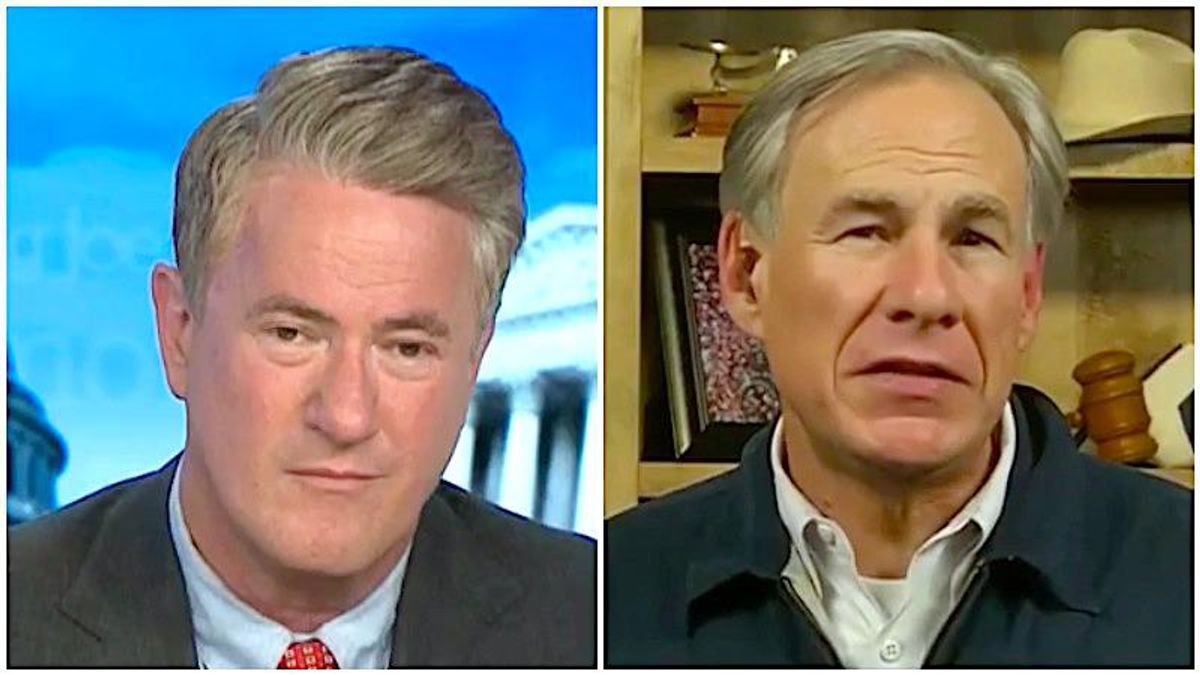 MSNBC's Joe Scarborough busted the Texas governor's "preposterous lie" about the power outage that has shut down his state in the wake of t.

Gov. Greg Abbott has blamed the outage on Rep. Alexandria Ocasio-Cortez and renewable energy, although wind turbines and other green energy sources make up only a fraction of the state's power capacity -- and the "Morning Joe" host laid the blame squarely on decades of Republican governance in Texas.

"He's just lying through his teeth," Scarborough said. "He can't blame AOC, he can't blame the [Green New Deal] or renewables. It's all his fault and all the fault of the Texas lawmakers who continued to underfund their energy infrastructure."

Abbott did concede on Twitter that natural gas and coal generators were also responsible for the power outage, but hours later he told Fox News host Sean Hannity that renewable energy was to blame -- when, in fact, the state's energy infrastructure had been underfunded for years.

"It's a preposterous lie," Scarborough said.

"They could have prepared for it, chose not to prepare for it, which, of course, is really galling. Do you know what is also so -- it's just galling, and I'm just thinking back to another Republican governor, Jeb Bush. When we would have terrible hurricanes coming through our state, you would never see Jeb Bush on Fox News or CNN or MSNBC. No, when there was a crisis and people's lives were in danger, that was the only thing that Jeb Bush was focused on, and if he were to get on, he wouldn't be assigning blame. He would say stay in your homes, you can go to middle school X to get food here. He was constantly worried about the crisis on the ground. Here you have a governor in the middle of one of Texas' greatest crises in quite some time, where people are dying, and millions are without heat in subfreezing weather, he's going on a show to make ideological arguments?"