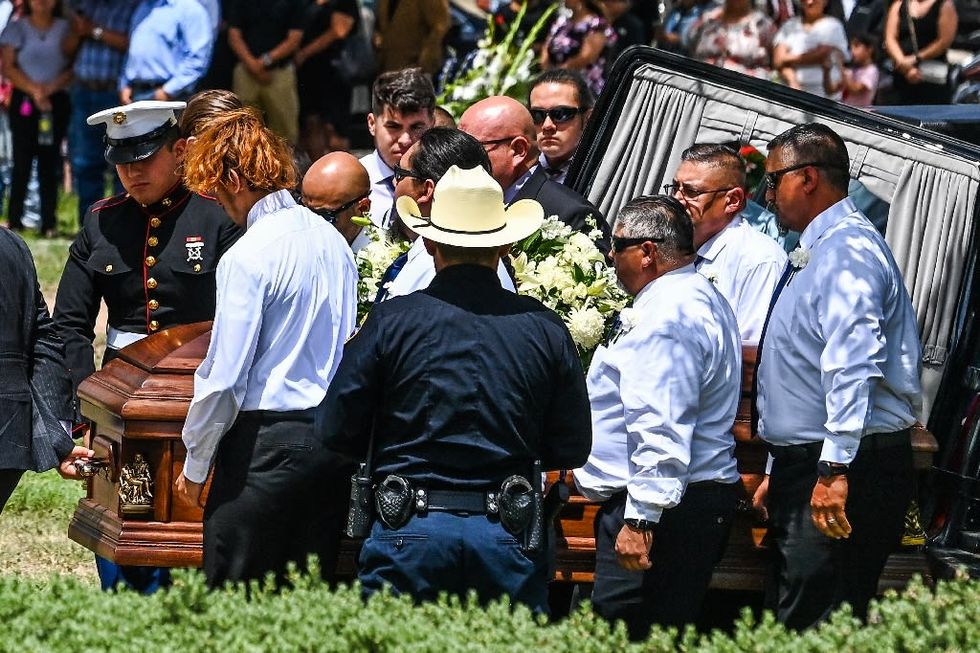 Pallbearers carry the casket of Irma Linda Garcia and Joe Garcia during their funeral service at Hillcrest Memorial Cemetery in Uvalde, Texas, on June 1, 2022

Uvalde (United States) (AFP) - The Texas town of Uvalde on Wednesday laid to rest one of the two teachers gunned down in last week's elementary school massacre, along with her husband who died days later, leaving their four children orphaned.

Irma Linda Garcia, 48, was killed when a teenaged gunman went on a rampage at Robb Elementary in an attack that left 19 young children dead and convulsed the United States with shock and grief.

Compounding the tragedy, Garcia's 50-year-old husband, Joe, died two days later. They had been married for more than 24 years.

"They began their relationship in high school and it flourished into a love that was beautiful and kind," obituaries for the pair said. They are survived by two sons and two daughters, the youngest just 12 years old.

Pallbearers carried the Garcias' flower-topped caskets into Sacred Heart Catholic Church in Uvalde for Wednesday's funeral mass, attended by Secretary of Education Miguel Cardona. The couple was buried later in the day.

"We must unite as a country against this senseless cycle of violence, act immediately to protect our children, and make sure that every child and every educator feels safe in our schools," Cardona said in a statement.

The superintendent of the Uvalde school district announced that students and staff would not return to Robb Elementary.

"We are working through plans on how to serve students on other campuses," Hal Harrell said in a statement.

A GoFundMe set up for the Garcias said Joe died of a "medical emergency" on May 26, two days after the shooting. It sought to raise $10,000, but more than $2.78 million has been donated so far.

"I truly believe Joe died of a broken heart and losing the love of his life," the page said.

John Martinez, who identified himself as Joe's nephew, tweeted that the father of four had "passed away due to grief."

With the community plunged into mourning -- the first funerals for the children killed were held Tuesday -- anger has also seethed over the police response as the tragedy unfolded.

Officers have come under intense criticism over why they waited well over an hour to neutralize the gunman, which Texas officials have admitted was the wrong decision.

The Uvalde massacre, the latest in an epidemic of gun violence in the United States, has rekindled desperate calls for gun reform. It came less than two weeks after 10 people died in an attack at a Buffalo, New York grocery store by a young gunman targeting African Americans.

Gun regulation faces deep resistance in the United States, from most Republicans and some rural-state Democrats.

But President Joe Biden -- who visited Uvalde over the weekend -- vowed Monday to "continue to push" for reform, saying: "I think things have gotten so bad that everybody is getting more rational about it."

Some key federal lawmakers have also voiced cautious optimism and a bipartisan group of senators worked through the weekend to pursue possible areas of compromise.

They reportedly were focusing on laws to raise the age for gun purchases or to allow police to remove guns from people considered a threat to themselves or others -- but not on an outright ban on high-powered rifles like the weapons used in both Uvalde and Buffalo.