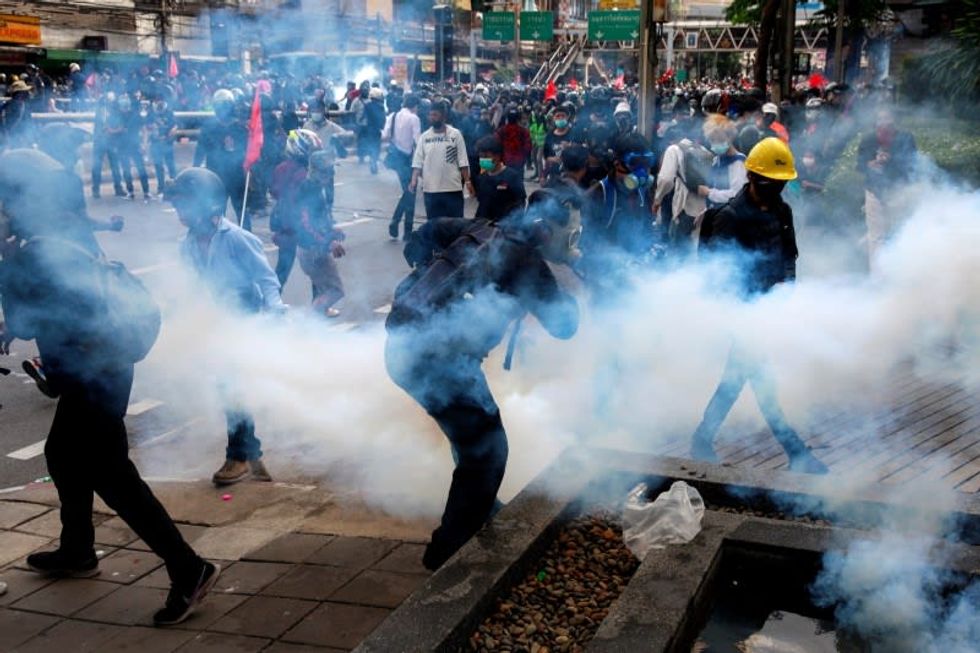 BANGKOK (Reuters) -More than a thousand Thai anti-government protesters clashed with police on Saturday, as they demonstrated against the government's failure to handle coronavirus outbreaks and its impact on the economy.

About a hundred police officers in riot gear sealed off a road near Victory Monument in the capital Bangkok with containers and used water cannon, tear gas and rubber bullets to stop a march toward Government House, the office of Prime Minister Prayuth Chan-ocha.

"Tear gas and rubber bullets were used for crowd control. Our goal is to maintain order," Krisana Pattanacharoen, a police spokesman, told reporters.

Dozens of protesters were seen being carried away on motorcycles and in ambulances. The Erawan Emergency Medical Centre said at least two civilians and three officers had been injured.

"We want Prayuth to resign because people aren't getting vaccines," said a 23-year-old male protester, who only gave his first name "Aom", for fear of repercussions.

"We don't have jobs and income, so we have no choice but protest."

Some 6% of Thailand's population of more than 66 million has been fully vaccinated and most of the country including Bangkok is under lockdown with a night-time curfew. Gatherings of more than five people are currently banned.

Nonetheless, street protests against the government have been held in recent weeks by several groups, including Prayuth's former political allies, as frustrations mount over its management of the health crisis.

Thailand reported on Saturday a record of nearly 22,000 new COVID-19 infections in a single day and the highest deaths, 212 fatalities.

The Southeast Asian country has reported 736,522 total cases and 6,066 deaths from the coronavirus since the pandemic began last year.