The typical vision of Neanderthals has not been particularly flattering, often featuring a giant club and spear and unfortunate sartorial choices. For years, researchers have worked to overturn this view, albeit with limited evidence.

But new research, published today in Nature, provides some of the first nuanced, detailed insights into the everyday lives of Neanderthal.

By sequencing the ancient DNA within preserved dental plaque (calculus) we uncovered specific information about Neanderthal diet and health as well as further insights into their interactions, behaviour, culture and knowledge.

Dental calculus preserves ancient DNA from microorganisms, viruses, food and other biological material that pass through an individual's mouth. This leaves a source of information for ancient DNA scientists to discover thousands of years later.

The Neanderthal diet and lifestyle

We examined two Neanderthals from El Sidron cave, Spain, and a Neanderthal from Spy cave in Belgium. We found drastic differences in their diet that correlated with changes in their microbiomes. 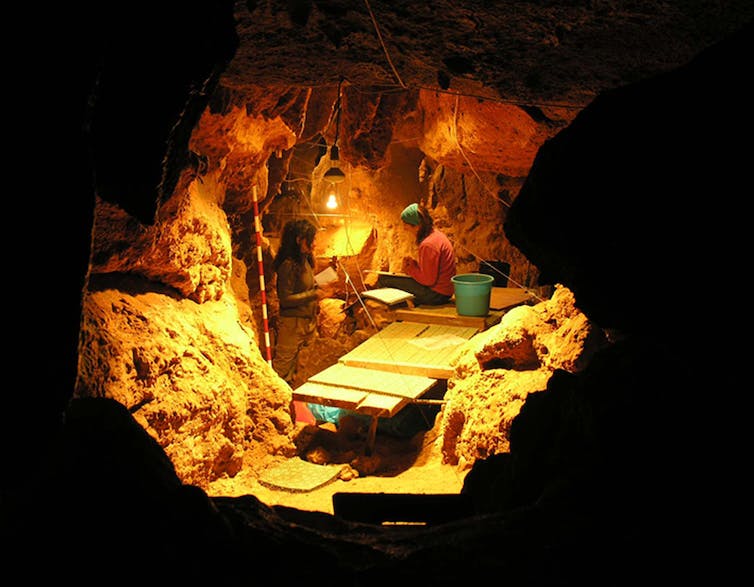 El Sidron, Tunnel of Bones, where 12 Neanderthal specimens dating around 49,000 years ago have been recovered.

The Spy Neanderthal fit the stereotype of a carnivorous, big game hunter, with DNA from woolly rhinoceros and wild mouflon sheep, as well as native mushrooms still eaten in Europe today.

This is the first time specific species have been identified in the Neanderthal diet, and match previous archaeological studies of this individual.

In stark contrast, the two El Sidron Neanderthals showed no evidence of meat in their diet. They were consuming pine nuts, moss, tree bark, diverse mushrooms and other (likely mouldy) herbaceous material.

These truly were paleo diets, consuming what could be foraged and identified in their local environment. For example, Spy cave in Belgium was on the edge of a steppe-like environment of grassy hills and plains, populated with megafauna such as woolly rhinos. In contrast, the El Sidron Neanderthals lived in a dense mountain forest, where pine nuts and mushrooms would have been a major food source. 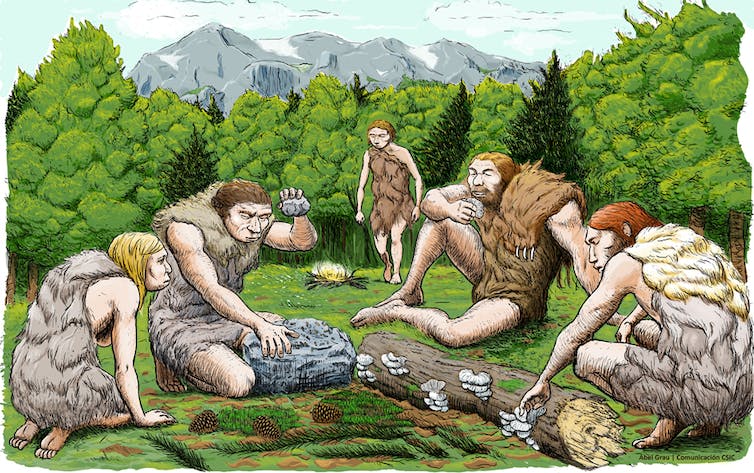 An artist's impression of the El Sidron Neanderthals who were likely gathering much of their food, rather than hunting large game.

The skeleton of one young male Spanish Neanderthal displayed a nasty dental abscess. His dental calculus also contained DNA from a serious gastrointestinal parasite (Microsporidia). As a result, it is likely that he was chronically ill.

Surprisingly, our dietary analysis revealed that this Neanderthal was likely treating his illnesses with natural remedies. He had DNA from poplar, (whose buds and bark are a natural source of aspirin) and, surprisingly, the mould Penicillium, the source of the world's first antibiotic, penicillin.

While Penicillium mould is common in the environment, he had clearly been eating rotting vegetation containing several other moulds. We did not see this in the other Neanderthals, raising the question of whether Neanderthals were using antibiotics.

This research suggests that Neanderthals maintained an extensive knowledge of treatments for ailments, and as such significantly changes our view of their culture and behaviour.

It also shows how the ancient bacteria on teeth now provide us with a completely new window into the behaviour of ancient hominids, and the origin of our own microbiomes.

In recent years, the biggest insight gained into Neanderthal lifestyles has come from studies of the Neanderthal genome. These have revealed that small parts of it survive in all non-African human populations.

This has finally confirmed that humans and Neanderthals did interbreed.

But the specific interaction between humans and Neanderthals has remained unknown, along with the implications for how or whether this might have involved transmitting diseases. 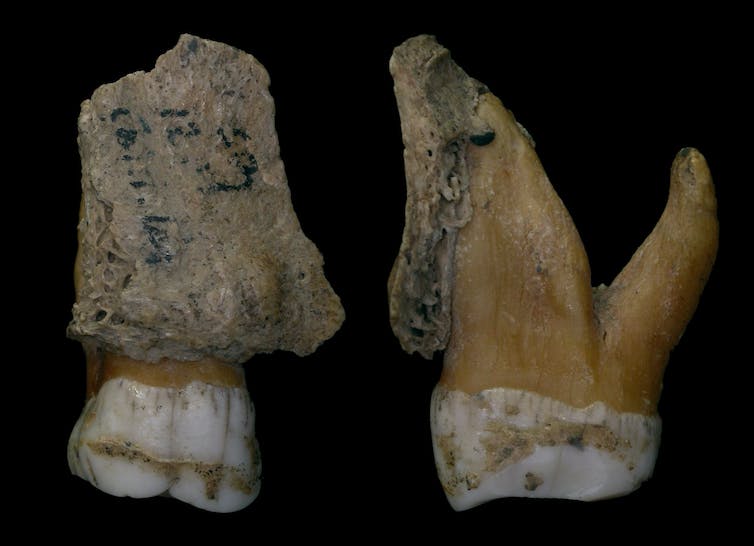 Neanderthal teeth from Spy with dental calculus deposit seen as the rind layer on tooth enamel.

We have been able to investigate these interactions using the microorganisms preserved in the ancient Neanderthal dental calculus. We were able to sequence a 48,000 year old bacterial genome, the oldest yet, and show that the Neanderthal and human forms separated around 120,000 years ago.

In modern humans, oral bacteria are typically swapped through direct food sharing or intimate contact, so this suggests at least some very close interactions between the two species long after they diverged.

Swapping saliva might have also resulted in the transfer of a wide range of healthy, beneficial microorganisms, or even nasty pathogens.

We know that these beneficial microorganisms are critical for human health. Changes to our diverse microbial communities can result in a wide range of diseases, including obesity, diabetes, heart disease, cancer, autoimmune disorders, etc.

Although we don't know how these interactions might have altered the health of Neanderthals or modern humans, our study reveals a new means to investigate this, and better understand the origins of our own microbiomes.