The sanctuary where the German armed forces' mules go to retire 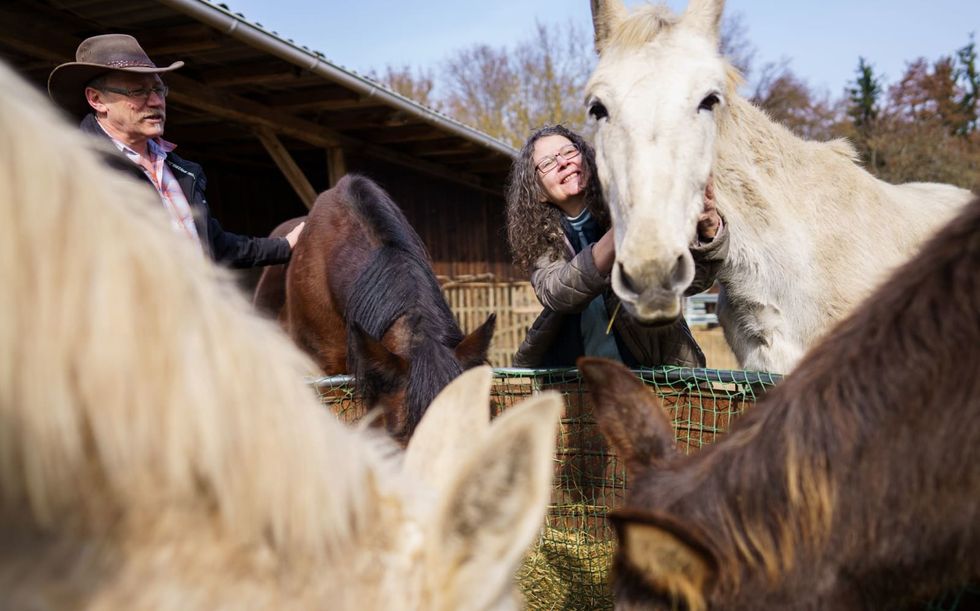 Petra Streibich loves horses, mules, donkeys and cats. So much so that she decided to set up a sanctuary for elderly and sick animals in the central German town of Wertheim.

Some of the animals come to Streibich with a serious resume: Several of her mules previously worked for the German armed forces. Having served their time, the veterans are now enjoying a well-earned rest.

It all started when a veterinarian put her in contact with an army brigade - the Gebirgsjaegerbrigade 23, or mountain infantry brigade, to be exact - at the Hochstaufen barracks in Bad Reichenhall.

Bad Reichenhall, in Upper Bavaria, is where the German army runs an operations and training centre for pack animals, according to a spokesperson. It employs roughly 50 mules and Haflinger horses.

The mules mainly carry packs up mountains, while the Haflingers are patrol animals. After they serve their time and reach a certain age, the army tries to figure out where to send them, a spokesperson says.

Mules can live up to the age of 45 if they're cared for right, according to Streibich. She had put her name on a waiting list, and the call came 10 years ago, when she received Quitte, her first mule.

Quitte is now 30 - and isn't the only mule under Streibich's care. Now there's Benno, Ronja and Roxana as well.

Streibich, who runs the sanctuary with her husband, Reiner, feels the animals deserve a happy retirement.

She has spent half of her life caring for animals and finds the idea that they would be euthanized after retiring horrifying: "They have served humans for so long, why should they be sent to heaven now?"

Caring for the animals does not come free of charge, however, especially when it comes to trips to the veterinarian, and Streibich says that she relies mainly on donations to finance the sanctuary.

The sanctuary is open to visitors, and Streibich hopes more people will come and visit again once the coronavirus pandemic is over.

The Covid-19 outbreak has left many other animal sanctuaries around the world struggling. Some, such as the Tadoba Andhari Tiger Reserve in Maharashtra, India, had to close for several months as a result.

For those that kept running, funding was a familiar challenge.

The VINE Sanctuary, a non-profit sanctuary for farmed animals in the north-eastern US state of Vermont that seeks to "undermine social and structural sources of animal abuse and exploitation, working from within an ecofeminist understanding of intersectionality," according to its website, cares for some 700 animals at a solar-powered site.

The sanctuary took a positive spin on what was a tough year by highlighting all the educational events it managed to put on, many of which were online, all while caring for the animals amid a pandemic.

The Italian Horse Protection (IHP) sanctuary relies heavily on volunteers to run its sanctuary for animals seized by the police due to ill treatment.

The volunteers who spend time there call the experience rewarding: "You will have the chance to see happy and peaceful animals, and you will learn things not only about horses, but also about yourself," writes Martina, who worked at the Italian site in January 2021.

Besides depending on donations, the IHP also sells calendars, hoodies and backpacks bearing their logo to raise funds on their website.

Others sell goods on site to generate income, such as the Wales Ape & Monkey Sanctuary, which cares for retired primates who were once pets or belonged to now-bankrupt zoos.

Its charity shop sells everything from cuddly animals to cookware, electronics, music, books and vintage clothing, and its owners appeal to visitors to bring along anything they don't need to help them raise funds for the animals at Cefn-yr-Erw, a former hillside farm.