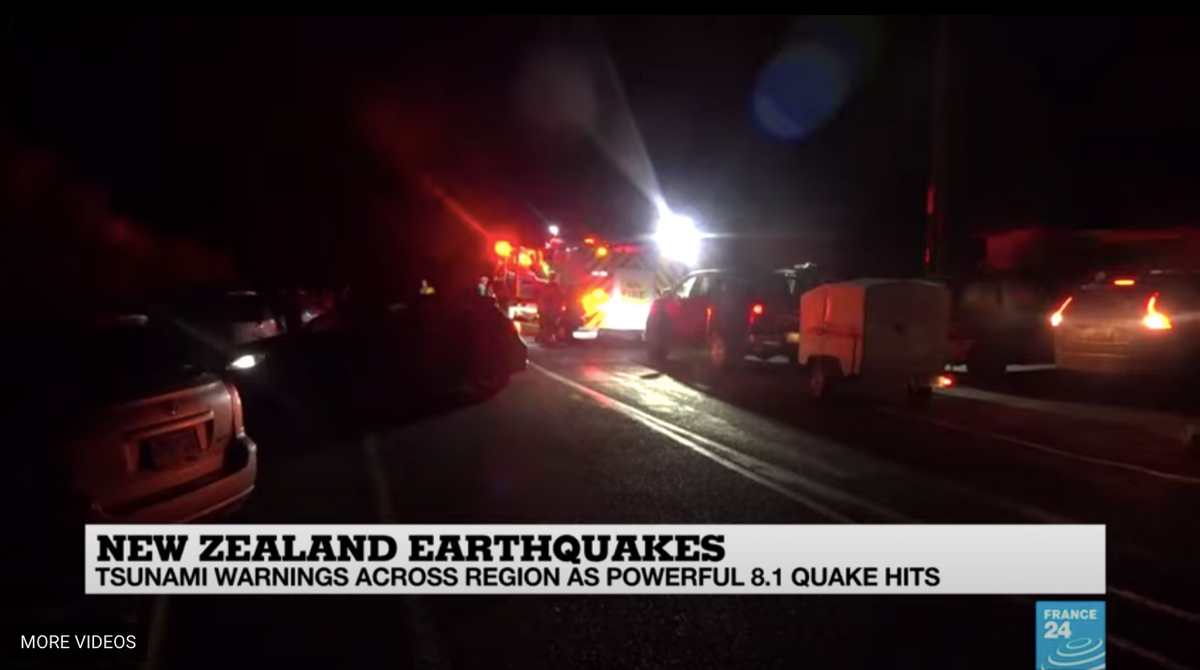 A powerful magnitude 8.1 earthquake struck Friday in the ocean off New Zealand, prompting thousands of people to evacuate and triggering tsunami warnings across the South Pacific.

The quake was the largest in a series of tremors that hit the region over several hours, including two earlier quakes that registered magnitude 7.4 and magnitude 7.3.

While the quakes triggered warning systems and caused traffic jams and some chaos in New Zealand as people scrambled to get to higher ground, they did not appear to pose a widespread threat to lives or major infrastructure.

That's because of the remoteness of where they hit. The largest struck about 1,000 kilometers (620 miles) off the coast of New Zealand.

One of the earlier quakes hit much closer to New Zealand and awoke many people during the night as they felt a long, rumbling shaking.

"Hope everyone is ok out there," New Zealand Prime Minister Jacinda Ardern wrote on Facebook.

Hope everyone is ok out there - especially on the East Coast who would have felt the full force of that earthquake (the map here shows just how many people were reporting it across the country)
Posted by Jacinda Ardern on Thursday, 4 March 2021

After the largest quake, civil defense authorities in New Zealand told people in certain areas on the East Coast of the North Island that they should move immediately to higher ground and not stay in their homes. They said a damaging tsunami was possible.

The U.S. Tsunami Warning System also cautioned that it could cause tsunami waves of up to 3 meters (10 feet) in Vanuatu and up to 1 meter (3 feet) in Australia, Fiji, French Polynesia and as far away as Mexico and Peru.

The U.S. Geological Survey said it was centered in the remote Kermadec Islands at a depth of 19 kilometers (12 miles).

The agency said in a report that the quake occurred at the intersection of the Pacific and Australia tectonic plates and eclipsed the largest quake previously recorded in the region, a magnitude 8.0 in 1976.

It said the interaction between the plates creates one of the most seismically active regions in the world, and it has recorded 215 quakes there above magnitude 6.0 over the past century.

The U.S. Geological Survey said the magnitude 7.4 quake was likely a "foreshock" that contributed to the larger quake but that the first quake that hit closer to New Zealand was too far away in time and distance to have directly contributed.

Officials in New Zealand had hours earlier issued a tsunami warning for coastal areas after the first of the smaller earthquakes struck off its northeastern coast at about 3 a.m. Friday. There were no immediate reports of serious damage or casualties, and the warning was lifted just before the largest quake struck.

The U.S. Geological Survey said the first quake was centered at a depth of 21 kilometers (13 miles) under the ocean about 174 kilometers (108 miles) northeast of the city of Gisborne.

It was widely felt in New Zealand, and residents in the major cities of Auckland, Wellington and Christchurch reported being shaken awake.

In 2011, a magnitude 6.3 quake hit the city of Christchurch, killing 185 people and destroying much of its downtown.