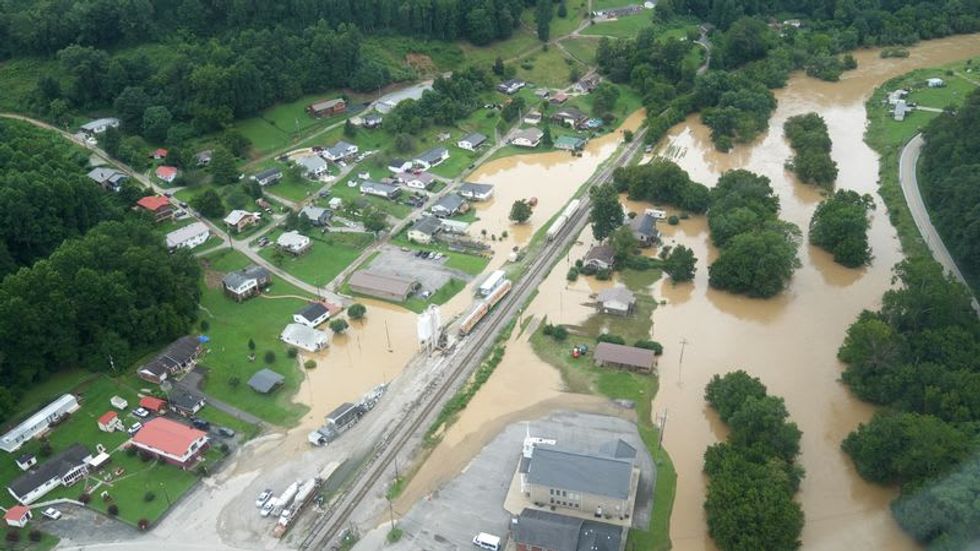 (Reuters) -The death toll in eastern Kentucky rose to 16 on Friday as flooding unleashed by "epic" torrential rainfall swept through homes, washed out roads and pushed rivers and streams over their banks, state authorities said, warning that more fatalities were expected.

The National Guard and the State Police used helicopters and boats to rescue dozens of people from homes and vehicles in Kentucky's Appalachian coal-mining region. Video footage from local media showed floodwaters reaching the roofs of houses and turning roads into rivers.

"This isn't over. While we're doing search and rescue, there are still real dangers out there," Governor Andy Beshear said during a morning news conference. "We get through this and we will get through this together."

The floods marked the second major national disaster to strike Kentucky in seven months, following a swarm of devastating tornadoes that claimed nearly 80 lives in the western part of the state in December.

Beshear said the confirmed flood-related death toll on Friday rose from 15 to 16 in four of the hardest-hit counties. The chief meteorologist for Lexington-based television station WKYT tweeted that at least six children were among the dead.

The floods resulted from downpours of 5 to 10 inches (13 to 25 cm) of rain that fell over the region in 24 hours, a deluge that may prove unprecedented in the region's record books, said William Haneberg, an environmental sciences professor and director of the Kentucky Geological Survey.

The disaster came two weeks after rain-triggered flash floods inundated the riverfront Appalachian community of Whitewood in southwestern Virginia near the Kentucky border.

The region's terrain of steep hillsides and narrow valleys make it prone to flooding to begin with, but the increasing frequency and severity of rain-caused floods in the Appalachian region are symptomatic of human-induced climate change, Haneberg said.

Flood events "are going to be more extreme and frequent, but it's hard to predict how extreme and how frequent they will be in the future," he said in an interview.

In Garrett, Kentucky, a coal-mining town about 125 miles (201 km) east of Lexington, brown floodwaters swirled through a commercial street and backed up against storefronts, video clips showed. Rescue boats carried people wearing life jackets along the submerged street, past the tops of vehicles poking through the high water.

"Everything is gone," Garrett resident Rachel Patton told WCHS-TV as she cried. “We had to swim out and it was cold. It was over my head. It was scary."

At least 300 people in Kentucky have been reported rescued by emergency crews, Beshear said. That number will likely climb, he said, considering that more than 100 people alone have been saved in National Guard airlifts.

Authorities went door-to-door on Thursday in a low-lying area in Jackson, Kentucky, a town of 2,200 people, ordering residents to evacuate after inspectors noticed a discharge from the nearby Panbowl Lake Dam.

"Late last night and early this morning, we thought that a real breach was imminent; we are hoping that's not the case. We were actually a little bit more optimistic but still concerned," Beshear said on Friday.

On Friday afternoon, some 22,000 homes and businesses in Kentucky and 2,200 in West Virginia were without power, according to Poweroutage.us.

Flood warnings and watches remained in effect throughout the day for the eastern half of the state, as well as northeastern Tennessee and western West Virginia, where more rainfall was expected to swell waterways already well above flood stage, the National Weather Service said.

The North Fork Kentucky River at Jackson crested more than 14 feet above flood stage, a record, early Friday, according to government monitors.

As much as a foot of rain (30 cm) has fallen in parts of the region over the last week, according to the weather service.

President Joe Biden declared a major disaster in Kentucky on Friday, allowing federal funding to be allocated to the state.

Across the country, heavy rains battered Las Vegas as floodwater washed over streets and rushed onto several casino floors and into parking garages along the famed Las Vegas Strip, video posted on local media and social media showed.

At Circa Casino, workers tried to sweep the water away from the flooded floor, while at Planet Hollywood, water rained down on a casino table from what appeared to be a hole in the ceiling.