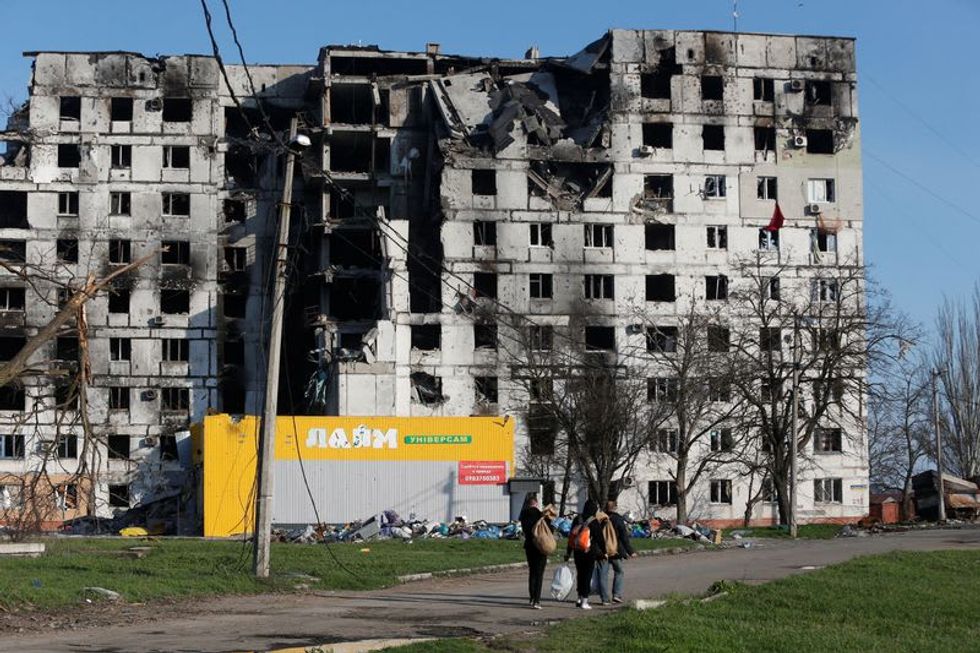 (Reuters) -A top ally of President Vladimir Putin said Russian forces will seize the last main stronghold of resistance in the besieged city of Mariupol on Thursday, after Ukraine proposed talks on evacuating troops and civilians there.

Mariupol would be the biggest city to be seized by Russia since it invaded Ukraine eight weeks ago in an attack that has taken longer than some military analysts expected, seen over five million people flee abroad and turned cities to rubble.

"Before lunchtime, or after lunch, Azovstal will be completely under the control of the forces of the Russian Federation," Ramzan Kadyrov, the head of Russia's republic of Chechnya, whose forces have been fighting in Ukraine, said of the steel plant.

Ukraine's defence ministry was not immediately available for comment. Its general staff said in an early Thursday update that missile and bomb strikes continued across the country.

The southeastern port city of Mariupol has endured the fiercest fighting of the war as besieging Russian forces try to take full control. Its capture would be a big strategic prize and would link territory held by pro-Russian separatists in the east with the Crimea region that Moscow annexed in 2014.

A few dozen civilians managed to leave the city on Wednesday in a small bus convoy, according to Reuters witnesses.

A Ukrainian marine commander, Serhiy Volny, said fighters at the steel works may not be able to hold out for much longer. President Volodymyr Zelenskiy has said an estimated 1,000 civilians are sheltering there.

Ukraine was ready for a "special round of negotiations" with no conditions "to save our guys ... military, civilians, children, the living and the wounded", Ukrainian negotiator Mykhailo Podolyak said on Twitter.

Kyiv has proposed swapping Russian prisoners of war for safe passage for trapped civilians and soldiers. It was not known if Russia had responded to the offer of special negotiations.

Fighters remain holed up in the plant and have ignored an ultimatum by Russia to surrender.

Elsewhere in the east, Ukraine said it had held off an assault by Russian forces attempting to advance in what Kyiv calls the Battle of the Donbas, a new campaign to seize two eastern provinces Moscow claims on behalf of separatists.

Russia's forces had carried out strikes on dozens of military facilities in the east and had shot down a Ukrainian Mi-8 helicopter near the village of Koroviy Yar, its defence ministry said.

Putin said the first test launch on Wednesday of Russia's Sarmat intercontinental ballistic missile, a new and long-awaited addition to its nuclear arsenal, would "provide food for thought for those who, in the heat of frenzied aggressive rhetoric, try to threaten our country."

Russia calls its incursion a "special military operation" to demilitarise and "denazify" Ukraine. Kyiv and its Western allies reject that as a false pretext for a war of choice.

The West has imposed unprecedented sanctions on Russia and given Ukraine extensive support, including arms.

U.S. President Joe Biden will deliver an update on Ukraine at 1345 GMT as he works to complete a new arms package, which is likely to be a similar size to an $800 million one announced last week, a U.S. official said.

G7 finance ministers at a meeting on Wednesday said Russia should no longer participate in international forums, including G20, International Monetary Fund and World Bank meetings this week.

Top officials from Britain, the United States and Canada walked out on Russia's representatives at a Group of 20 meeting in Washington, exposing deep divisions in the bloc of major economies.

Mariupol, once a prosperous seaside city of 400,000, is now a wasteland where corpses lie in the streets as Russia slams the Azovstal steel plant with bunker-buster bombs, the government in Kyiv said.

The deputy commander of the Ukrainian Azov Regiment in Mariupol, Svyatoslav Kalamar, said several bunkers under the plant still held about 80-100 civilians each.

Black smoke billowed from the plant on Wednesday as evacuees queued to get onto buses.

Pensioner Tamara, 64, said she was going to stay with her sister in Zaporizhzhia. She was leaving with her husband, daughter, son-in-law and grandson.

"It is a pleasure ... to leave after this nightmare. We lived in basements for 30 days," she said tearfully.

Russia denies targeting civilians and has blamed Ukraine for the failure of earlier attempts to organise humanitarian corridors out of Mariupol.

Russian forces retreated from northern Ukraine after an assault on Kyiv was repelled last month, but they have poured troops back in the offensive in the east that began this week.

British Prime Minister Boris Johnson said peace talks were likely to fail and world leaders, including Biden, had agreed on a call this week that they would continue to supply Ukraine with weapons.