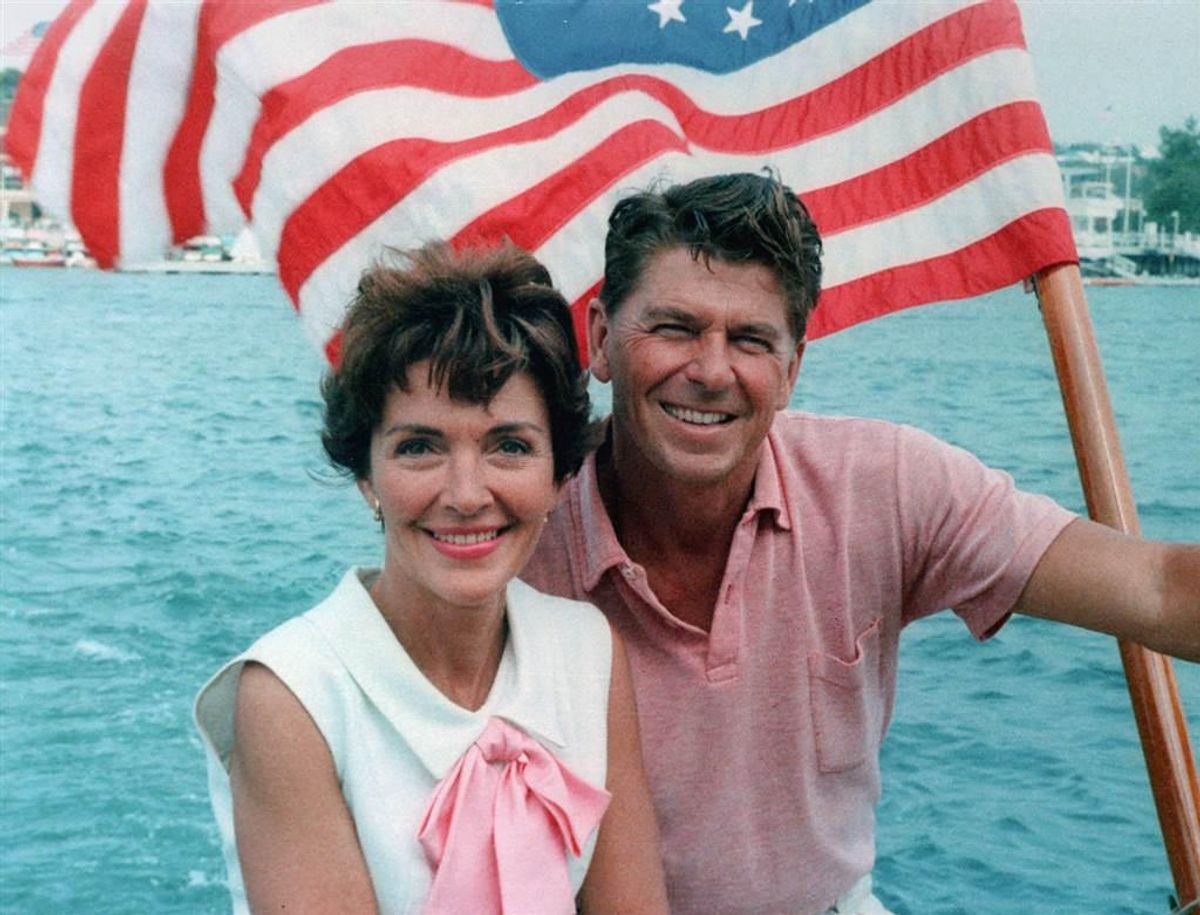 Familiar to millions of Americans by appearing in movies and hosting the weekly General Electric Theater on Sunday night television, Ronald Reagan began a political career on October 27, 1964 with a nationally televised speech on behalf of Republican presidential candidate Barry Goldwater. It was a week before the election. The speech was filled with false claims about the overbearing U.S. government and unverified anecdotes. This was all to support Reagan's view that government needed to get out of the way of the economic freedom of the American people. Reagan falsely claimed that farmers could be imprisoned who did not cooperate with federal government programs, and that the Federal Reserve Board planned inflation.

Reagan also said, "We were told four years ago that seventeen million people went to bed hungry each night. Well, that was probably true. They were all on a diet." Due to his building a cult of personality, this particularly callous and inaccurate quote was overlooked. When Reagan spoke, more than 36 million Americans were living in poverty, nearly one-fifth of the country. Following the formula of that speech, Reagan won the California governorship two years later by a landslide and would go on to win the presidency twice by equally impressive margins. The Reagan cult of personality enabled him to remain popular with his followers even when violating his own conservative principles. Throughout his political career, Reagan railed against big government deficit spending. But when the national debt rose by 189 percent, he suffered no political consequences. When Reagan admitted to misleading Americans during the Iran-Contra scandal, his popularity went down temporarily, but bounced back by the end of his presidency.

Donald Trump, like Reagan, gained fame with the American public through show business. Trump starred in a reality television show called The Apprentice. Many Americans assumed that Trump was the "boss" starring in his own program, but in reality Trump was an actor employed by a television production company, just as Reagan was an actor employed by the General Electric Company. The Apprentice gave Trump a favorable celebrity status leading toward a political cult of personality. While Reagan launched his political career with a televised speech, Trump began his with a nationally televised accusation that Barack Obama should not be president because he was not a natural-born U.S. citizen. With no proof other than his words, Trump claimed to have investigators in Hawaii uncovering evidence that Obama was not born there as his birth certificate indicated. "They couldn't believe what they're finding," Trump asserted. Several years later, shortly before winning the presidency, Trump admitted that he believed Obama is a U.S. citizen.

When Trump announced his presidential candidacy, he declared, "Sadly the American dream is dead." The campaign slogan became "Make America Great Again" That is not unlike Reagan's decrying big government for destroying our freedom. The Reagan 1980 campaign slogan "Morning in America" is not very different in meaning from the Trump 2016 slogan. Like Reagan, Trump deviated from facts to support political points. Examples of this are legion, from Trump's assertion that he saw thousands of Muslims on 9/11 cheering the collapse of the twin-towers to his claim of Obamacare imploding. One difference however is that Reagan's factual deviations usually served to buttress his political points, while Trump's were often to boost himself, from the false claim to have graduated from the Wharton School at the University of Pennsylvania at the top of his class, and the boast of being a "very stable genius." That arrogance was not in Reagan's character.

Trump's personality cult protected him to some extent as it did Reagan. Trump's popularity was never high as Reagan's was. But his approval ratings always remained in the middle 40s, not dropping precipitously as in the case of Nixon and Carter for example. That is despite numerous scandals, including the Russia investigation, and a poorly-handled pandemic killing hundreds of thousands of Americans. In the end, 74 million Americans voted for Trump. The cult of personality remained intact.

Another and more sinister similarity in the Reagan and Trump cults of personality is white racism. Both men saw an opportunity to advance their political careers by appealing to white voters in a racially prejudicial way. In Reagan's 1966 campaign for governor he appealed to white voters disgusted with the "beatniks, radicals, and filthy speech advocates" as Reagan termed it. In his 1976 campaign for the Republican presidential nomination, Reagan frequently told the "welfare queen" story about a woman on welfare who allegedly defrauded the U.S. Government of $150,000. The story was significantly embellished, but was in keeping with Reagan's political views. He once called welfare recipients a "faceless mass waiting for a handout." He did not mention race, but the implication was abundantly clear that the welfare queen is black. In his 1980 presidential campaign, Reagan after winning the nomination, traveled to Mississippi to give a speech at the Neshoba County Fair to a white audience glorifying states' rights, which has long been the cry of white Southerners fighting civil rights. Neshoba County is the site where three civil rights workers were infamously killed in 1964.

Donald Trump's appeal to white racism has been more blatant. In August 2017, the Unite the Right rally occurred with one counter-protester killed. Trump said that "you also had people that were very fine people on both sides." One side had neo-Nazis, Ku Klux Klansmen, and Alt-Right people. In the last presidential campaign, Trump in numerous ways appealed to racism attempting to win re-election. For example, he condemned NASCAR for banning the Confederate flag. He condemned Black Lives Matter and predicted the "beautiful suburbs" will be destroyed by low-income housing if Biden wins. He blamed big city Democrats and their black voters for stealing the election, ignoring the fact that he lost battleground states because too many whites in the suburbs deserted him.

Two recent presidents have had cults of personality, although that is antithetical to democracy. That enabled both to win their party nominations and the general election. It gave both men the luxury of deviating from truthfulness and enabled Reagan to survive a severe scandal and Trump to be incompetent and scandalous while maintaining a significant base of popularity. This also indicates something ominous about America. If a candidate has a cult of personality, and develops a large number of devoted followers who believe he or she can do no wrong, it could potentially make white supremacy or other malignant elements of politics seem permissible, with unknown consequences for democracy.

Two Washington Post reporters overheard the Georgia Republican twice call out to Ocasio-Cortez by her first name, and the New York Democrat kept walking, so Greene picked up her pace and shouted accusations at her colleague and demanded a public debate.

In his latest Daily Beast column, Lewis commends Cheney for resisting the temptation to simply move on from the deadly Trump-incited riots at the United States Capitol building that were intended to block Congress from certifying the results of the 2020 election.

The right-wing media company Censored.TV, launched by Proud Boys founder (and VICE Media co-founder) Gavin McInnes in 2019, is "laying off all its staff," according to one of its hosts, onetime alt-right superstar Milo Yiannopoulos. For the moment, however, the site remains live. Censored.TV website hosts content posted by various conservative personalities behind a paywall, accessible to subscribers who pay $10 a month.

It remains unclear whether the site will keep trying to produce content without paid staff or will close down. "Sad news! You may have heard the rumors that Censored.TV is laying off all its staff," Yiannopoulos wrote on Telegram on Wednesday morning. "This week, I was told there's no longer enough money for my producer, despite the thousands of subscribers I've brought into the network. I love Gavin and will always be grateful to him for hosting my show when no one else would. In the meantime, I am entirely without any regular source of income. ...They paid me late 11 months out of the last 12, so I suppose I should have seen it coming."