'We have a sick country': Trump rants about 'dangerous' migrant surge during visit to US-Mexico border 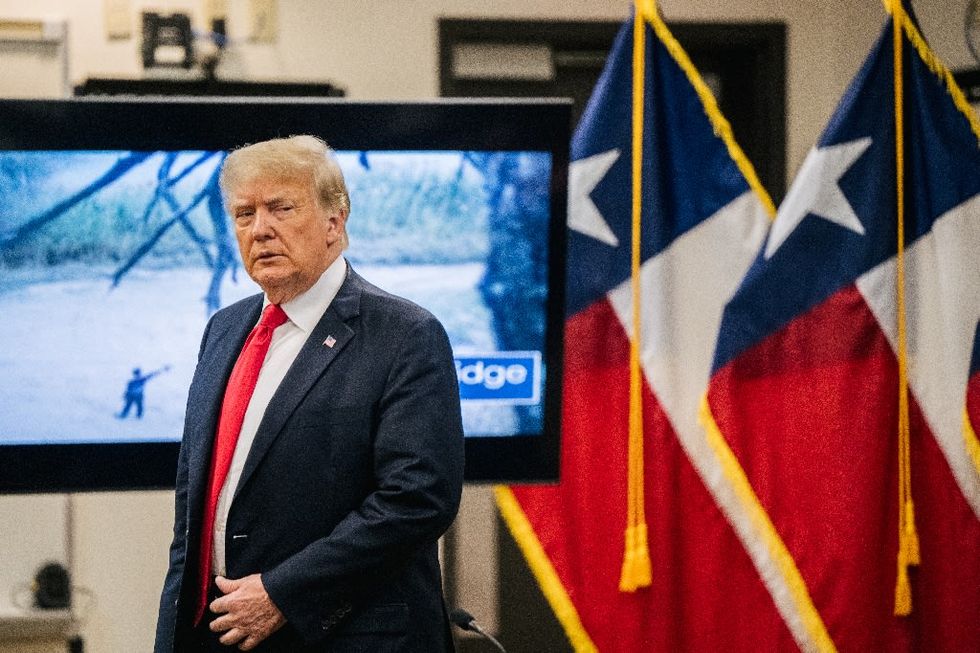 Weslaco (United States) (AFP) - Donald Trump visited the US-Mexico border Wednesday to denounce an immigration crisis he said has become "more dangerous" than ever, using an underlying theme of his presidency to rail against his successor Joe Biden.

Trump is on his first major fact-finding tour since leaving the White House in January, coming as the Biden administration grapples with a migrant surge that Trump blames squarely on an easing of his "tough but fair" policies that were aimed at deterring new arrivals.

"Now we have an open, really dangerous border, more dangerous than it's ever been in the history of our country -- and we better go back fast," the brash billionaire said after receiving a briefing from border region sheriffs at the Department of Public Safety in the small town of Weslaco, Texas.

The Republican ex-president was accompanied by Texas Governor Greg Abbott, whom Trump has endorsed for re-election next year, and who has pledged to finish Trump's wall along his state's border, but with private donations and not federal assistance.

Trump was joined by several Republican members of Congress, including conservatives Lauren Boebert and Jim Banks, on a mission to "admire the wall" at a border crossing in Pharr, Texas, where an uncompleted portion of the metal structure looms over a grassy bluff.

The area is in the Rio Grande Valley, one of the illegal migration hot spots along the 1,930-mile (3,100-kilometer) border.

Trump expressed pride in his efforts to build more than 400 miles of border barrier during his four-year presidency and to tamp down the number of migrants crossing into Texas, New Mexico, Arizona and California.

"We did a hell of a job, and we had it down to really a science," Trump said. "It was down to a point where people just weren't getting in, unless they came in legally."

Most of Trump's new construction involved bolstering or replacing existing wall or fencing, with fewer than 50 miles of it being constructed where none stood previously.

The detention of migrants at the frontier reached its highest level in 15 years in March, and Biden critics accused the president of downplaying the situation.

Republican lawmakers have slammed Biden for reversing some of Trump's programs including his "remain in Mexico" policy, which had forced thousands of asylum seekers from Central America to stay south of the US border until their claims were processed.

Abbott, seated next to Trump, took aim at Biden's policies during the briefing.

"Things have changed so quickly and so dramatically under the Biden administration, it's been amazing and disastrous," the governor said, noting that the number of people apprehended crossing the border in May was 800 percent higher than in the same month last year.

Critics have also warned of the surge in drug trafficking into the United States, particularly of fentanyl, a powerful synthetic opioid.

Biden last week dispatched Vice President Kamala Harris, whom he has tasked with overseeing efforts to stem migration, to the border region where she highlighted the administration's commitment to "orderly and humane" immigration policies.

Harris visited El Paso, but received withering criticism because the border city is hundreds of miles from the epicenter of the migration surge.

Trump, who may yet seek re-election in 2024 but has not announced his plans, has repeatedly knocked Biden for the border crisis.

The Democratic Party has pushed back, saying Republicans were bringing their "clown show" to the border to mislead voters.

Trump, who has been booted from social media and was impeached for inciting the deadly January 6 riot at the US Capitol, has recently increased his public appearances as he gears up for a political season ahead of next year's midterm elections.

Last week in Ohio he held his first campaign-style rally since leaving the White House, repeating the falsehood that he won November's election but Biden prevailed through fraud.

He returned to the theme in Texas.

"We have a sick country in many ways, it's sick in elections and it's sick on the border," he said.