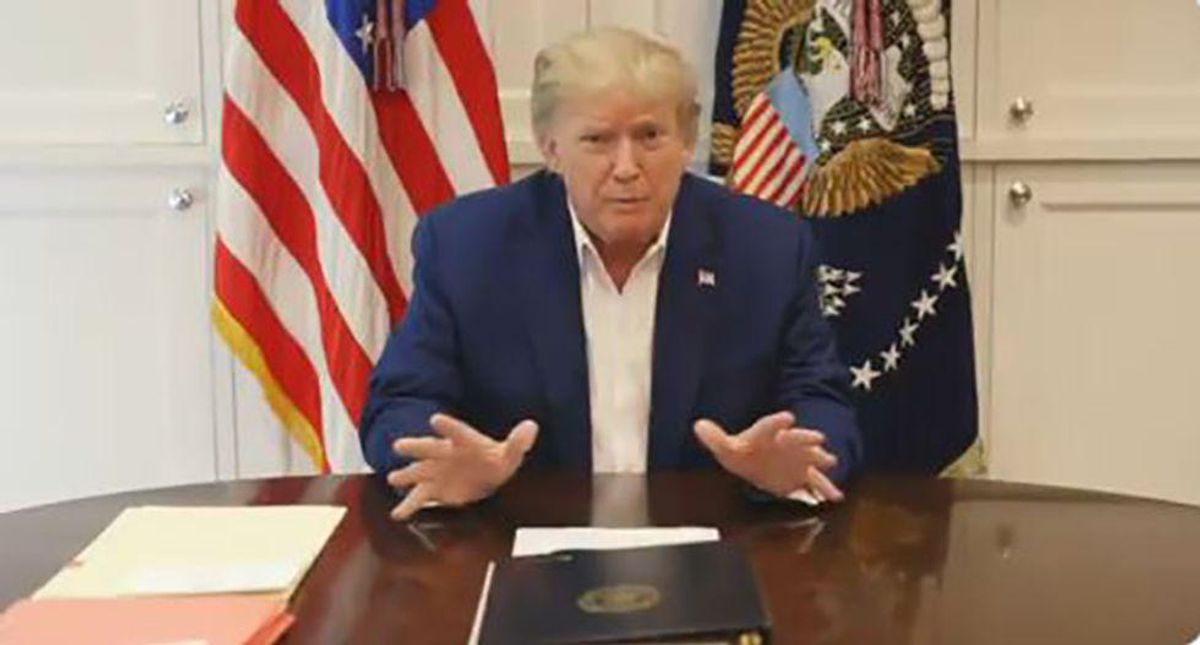 On Thursday afternoon, a new report in the National Review, longtime voice of the mainstream conservative movement, The National Review, confirmed much of what we'd heard from previous Twitter "reporting" by Maggie Haberman of the New York Times: Donald Trump apparently believes that come August, he will be "reinstated" as commander in chief.

Haberman broke the supposed news on Tuesday, tweeting that "Trump has been telling several people he's in contact with that he expects he will be reinstated by August."

Trump has been telling a number of people he’s in contact with that he expects he will get reinstated by August (no… https://t.co/0gUGozPQQR
— Maggie Haberman (@Maggie Haberman) 1622551318.0

In a Thursday afternoon article titled, "Maggie Haberman is right," National Review reporter and columnist Charles Cooke confirmed Trump's thinking. Apparently the ex-president also thinks that former Sens. David Perdue and Martha McSally, both defeated by Democrats in the last cycle, will also be back in office after "audits" in Georgia and Arizona (respectively) have completed.

"I can attest, from speaking to an array of different sources, that Donald Trump does indeed believe quite genuinely that he — along with former senators David Perdue and Martha McSally — will be 'reinstated' to office this summer after 'audits' of the 2020 elections in Arizona, Georgia, and a handful of other states have been completed," Cooke wrote. "I can attest, too, that Trump is trying hard to recruit journalists, politicians, and other influential figures to promulgate this belief — not as a fundraising tool or an infantile bit of trolling or a trial balloon, but as a fact."

While Cooke, addressing a largely conservative audience, appears convinced that Trump believe the bonkers August hypothesis, which likely stems from MyPillow CEO Mike Lindell, many in right-wing circles remain very much split on the theory.

The Daily Beast reported that Lindell believes he is behind the idea that is now planted inside Trump's head. "If Trump is saying August, that is probably because he heard me say it publicly," Lindell told Daily Beast reporters Will Sommer and Asawin Suebsaeng on Wednesday.

When reached for comment on this story, the bedding magnate declined to discuss the issue directly, telling this reporter, "You don't exist in my world! You're a terrible, horrible journalist!" Lindell would not comment on the nature of conversations he may or may not have had with Trump, but in a media appearance on Thursday evening, doubled down on his belief that Trump will be back in the White House by the end of August.

While some pundits have been willing to give Lindell's fantastical theories plenty of air, including right-wing operative Roger Stone and former Trump adviser Steve Bannon, others aboard the Trump train are pushing back, eager to convey the impression they're still tethered to reality.

"Nobody's more MAGA or PRO TRUMP than I am and this "TRUMP thinks he's gonna be president in August" is BS. No one thinks this. It's Hysterical Democrats running around trying to come up with a New Pretext to cancel Trump supporters," Newsmax TV host Greg Kelly tweeted. "SHUT UP."

Similarly, right-wing radio host and former Trump adviser Sebastian Gorka has been pouring cold water on Lindell's claims of voter fraud, even though he hawks Lindell's products on the air.

On Thursday evening, Jenna Ellis, who was one of Trump's many legal advisers during his attempt to reverse his election defeat, appeared frustrated over Lindell's claims. "Mike Lindell should go back to law school ... for the first time," Ellis tweeted.

The scale of Trump's delusion is quite startling. This is not merely an eccentric interpretation of the facts or an interesting foible, nor is it an irrelevant example of anguished post-presidency chatter. It is a rejection of reality, a rejection of law, and, ultimately, a rejection of the entire system of American government.

In a Friday morning interview on the right-wing cable network Newsmax, Trump adviser Jason Miller claimed that the stories about Trump believing in a magical August reinstatement are "not true." Perhaps that settles it?