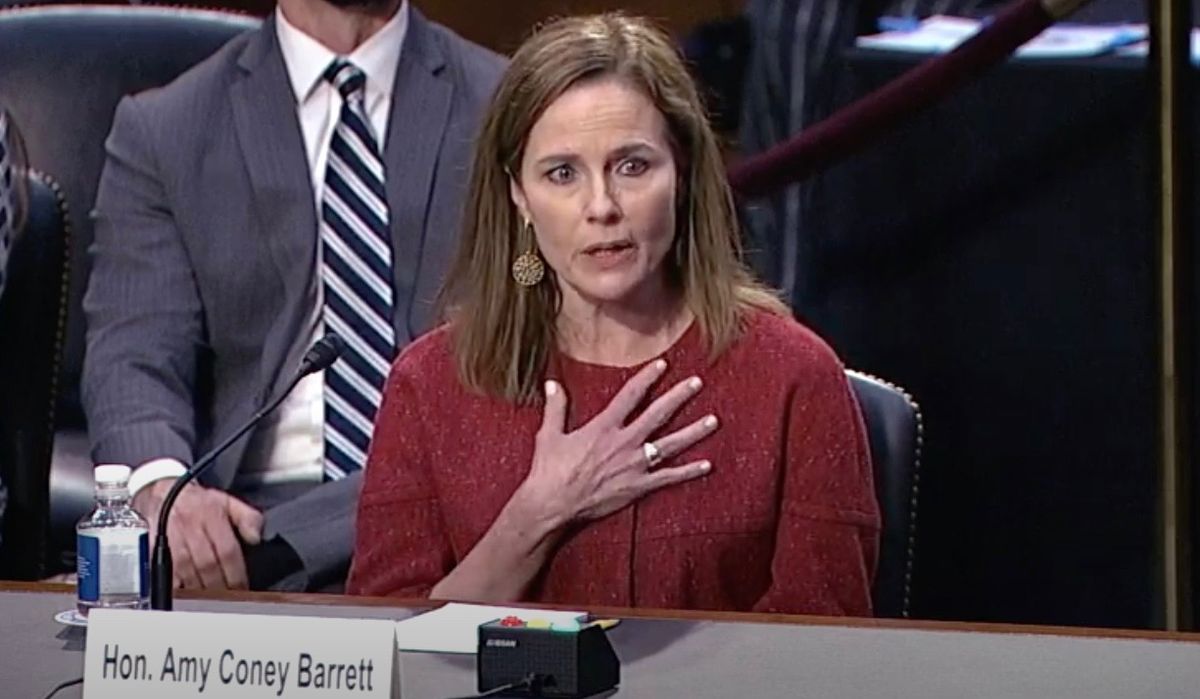 Donald Trump may be spending his post-presidency golfing at Mar-a -Lago but he remains front and center in the hearts and minds of millions of Republican voters, as evidenced by the 46% who said in a new Suffolk University/ USA Today poll released over the weekend that they would join a Trump Party if he decided to split off from the GOP. A whopping 80% of Republican respondents said they support punishing any Republicans in Congress who voted for Trump's impeachment. He is still their Dear Leader even in exile.

So the GOP still has a Trump problem. If it loses 20-30% of its voters, it will prove difficult to win any elections whether it's called the Trump Patriot Party or the plain old GOP. That is because the polarization that powers the extreme right-wing under Trump depends upon having every last self-identified Republican vote their way. There are no more crossovers when it comes to Donald Trump.

This is the dilemma now Senate Minority Leader Mitch McConnell, R-Ky., finds himself trying to navigate as he tries to take back the Senate in 2022. So far, he's tried to have it both ways. Perhaps he and South Carolina Sen. Lindsey Graham are playing some elaborate game of "good cop-bad cop" with Graham ostentatiously currying Trump's favor while McConnell writes op-eds in the Wall Street Journal desperately trying to assuage big money donors and appalled suburban voters with reassurances that the Republican establishment hasn't gone completely mad.

It's impossible to know how any of that will work out but whatever happens, the GOP is taking advantage of one major aspect of Trump's legacy: The Big Lie. A recent Quinnipiac poll found that 76% of Republicans still say they believe there was widespread fraud in the 2020 election and that Trump was the legitimate winner. Republican lawmakers in states across the country are now rushing to pass various draconian vote suppression schemes.

It's not that they haven't been doing that all along, of course. That's conservative electoral strategy 101, about which I've written many times. Having lost the popular vote seven out of the last eight presidential elections, they know very well that they do not have the support of a majority of voters in the country. Now that Trump conveniently persuaded GOP voters that the presidential election was stolen from them in broad daylight, the opportunity to curb voting in some new and ingenious ways has presented itself and they are going for it.

So far this year at least 165 bills that would restrict voting access are being considered in state legislatures nationwide reports the Brennan Center for Justice. And the excuse Republicans are using is that they must do this to "restore trust" in the voting system — trust that was destroyed by the outrageous lies of Donald Trump and his henchmen. What a neat trick. Apparently, the only way they can restore trust is to "fix" problems that don't exist but which also happen to suppress Democratic votes. Take Georgia, for instance, ground zero for Trump's post-election machinations. According to the Brennan Center, the Republican legislature has proposed curtailing early voting — including on Sundays when historically Black churches have caravaned congregations in what is called "souls to the polls" — making drop boxes more onerous to access and requiring several new steps in order to vote by mail. One of the most counterintuitive restrictions is a new process that disallows dropping ballots off on Election Day and three days prior. It makes no sense. If you've forgotten to get your ballot in the mail you should be able to walk it in. What can possibly be a reasonable rationale against that?

You can see how important this issue is right now by the fact that this week's CPAC conference is featuring seven panel discussions on "election protection" with names like "The Left Pulled the Strings, Covered It Up, and Even Admits It." "Failed States (PA, GA, NV, oh my!)" and "They Told Ya So: The Signs Were Always There." Here's one of the featured speakers, a lawyer who secretly helped Trump behind the scenes:

It goes without saying that the right-wing media continues to flog this lie but it is spread far and wide by the the major networks as well which continue to feature guests who find subtler ways to poison the public's mind. Take Rep. Steve Scalise, R-La, on ABC's "This Week" dodging the question in a different way, suggesting that the "real problem" is that the states didn't follow their own laws in the election, as some of Trump's bush league lawyers argued at the time before being shot down by every judge who heard them.

This version of the Big Lie is what MSNBC's Chris Hayes dubbed "High Hawley-ism", after the unctuous mewlings of Sen. Josh Hawley, R-Mo, during the post-election period, which Hayes says is a trial balloon for GOP state legislators to unilaterally award electoral college votes to whomever they choose. You may recall that was what Trump was trying to do up until the very minute his rabid mob sacked the Capitol. Hayes wrote:

This dubious theory, that only state *legislatures* can make these kinds of changes also invites all kinds of mischief by federal judges to reach in and overrule state supreme courts. It didn't work in 2020, but that doesn't mean it won't.
Further, as Scalia memorably noted there is no constitutional guarantee of the right to vote for president; we vote for electors. Every state with R control could pass a law awarding all state electors to the candidate that won the most counties and basically guarantee R victory.

As the New York Times reported at the time, the conservative majority on the Supreme Court gave plenty of signals during the election campaign that they were amenable to this idea, making it clear that they believe state legislatures have the right to enact strict measures against (non-existent) voter fraud. As Wendy R. Weiser, the director of the Democracy Program at the Brennan Center for Justice, told the Times:

Even without the reasoning, it's very clear that what the court has done throughout this election season has made it clear that federal courts are not going to be significant sources of voting rights protection in the lead up to elections. It's the unique constitutional role of the courts to protect individual rights like voting rights, and they're treating it like policy decisions.

That's what Trump put Amy Coney Barrett on the Supreme Court to do for him last fall, but the cards just didn't fall his way enough to put it to use. Even so, the Big Lie about the stolen election has opened the door for a wave of voter suppression not seen in decades with a Supreme Court ready to rubber stamp it. It may end up being his greatest legacy.

Last week, Special Counsel John Durham secured an indictment against an obscure cyber-lawyer and Democratic insider named Michael Sussmann for allegedly lying to the FBI about who his clients were when he relayed a tip about possible digital communication between the Trump Organization and Russia. Durham was appointed by Donald Trump to delve into the origins of the Trump/Russia investigation. Sussmann's indictment appears to be the culmination of that probe, which has already dragged on for more than two years.

A grand jury only hears the prosecution's side of the story. Hence the truism that a grand jury will indict a ham sandwich. With the five-year statute of limitations running out, Durham sought to indict while the indicting was good. At least now he can say he got a Clinton lawyer. This means a lot to the QAnon base, but it won't mean much to a jury.