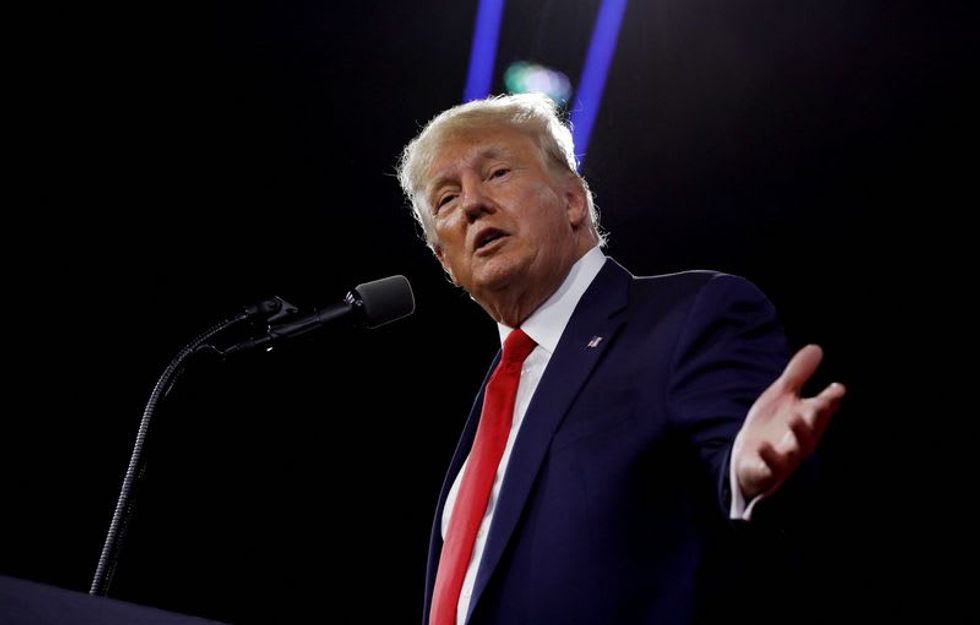 ORLANDO, Fla. (Reuters) - Former President Donald Trump on Saturday condemned Russia's invasion of Ukraine and said he was praying for Ukrainians, marking a sharp shift of tone from earlier this week when he praised Russian President Vladimir Putin.

Trump delivered his remarks at the CPAC conservative gathering in Florida a few hours after the United States and allies announced sweeping new sanctions that would kick some Russian banks off the main global payments systems and limit the ability of Russia's central bank to support the rouble.

Earlier this week, Trump irked some Republican party members by describing Putin's actions in Ukraine, where cities have been pounded by Russian artillery and cruise missiles, as "genius" and "pretty savvy."

Addressing an adoring crowd at CPAC, Trump expressed empathy for Ukrainians and this time praised Ukrainian President Volodymyr Zelenskiy, calling him "brave" as he stays in Kyiv, the capital.

"The Russian attack on Ukraine is appalling. We are praying for the proud people of Ukraine. God bless them all," Trump said.

Trump also used his pulpit at CPAC, which touts itself as the world's largest conservative gathering, to bash Democratic President Joe Biden, saying Putin took advantage of his being "weak" to attack.

Trump linked the invasion to the U.S. 2020 presidential election, a fixation of his, again falsely saying that fraud was to blame for Biden's victory.

"As everyone understands, this horrific disaster would never have happened if our election was not rigged and if I was the president," he said, to which a woman in the packed audience responded: "You are the president!"

Trump also cited Russia's invasion of Georgia under George W. Bush and Crimea under Barack Obama before declaring: "I stand as the only president of the 21st century on whose watch Russia did not invade another country."

Trump did address his past praise of Putin, saying he was correct that Putin was smart because he was outfoxing world leaders. "The real problem is that our leaders are dumb, dumb. So dumb," he said.

In an interview released earlier on Saturday, Biden mocked Trump's comment that Putin is a "genius."

"I put as much stock in Trump saying that Putin is a genius than when he called himself a stable genius," Biden said.

During the four-day CPAC conference in Orlando, Florida, which closes on Sunday, conservatives have repeated the line that Putin decided to invade Ukraine because he knew Biden was "weak." Republican politicians have broadly steered clear of lauding Putin, however, and hot-button domestic issues, like mask mandates, have featured far more heavily than foreign policy.

Earlier on Saturday, J.D. Vance, a Republican candidate for an Ohio U.S. Senate seat, said the American political class was fixated on the Ukraine conflict at the detriment of problems closer to home, such as record crossings at the Mexican border.

"I'm sick of being told that we have to care more about people 6,000 miles away than we do people like my mom, and my grandparents, and all the kids who are affected by this crisis," said Vance, a venture capitalist and author.