Evangelicals abandoned Christianity — and chose to be 'conservatives' instead 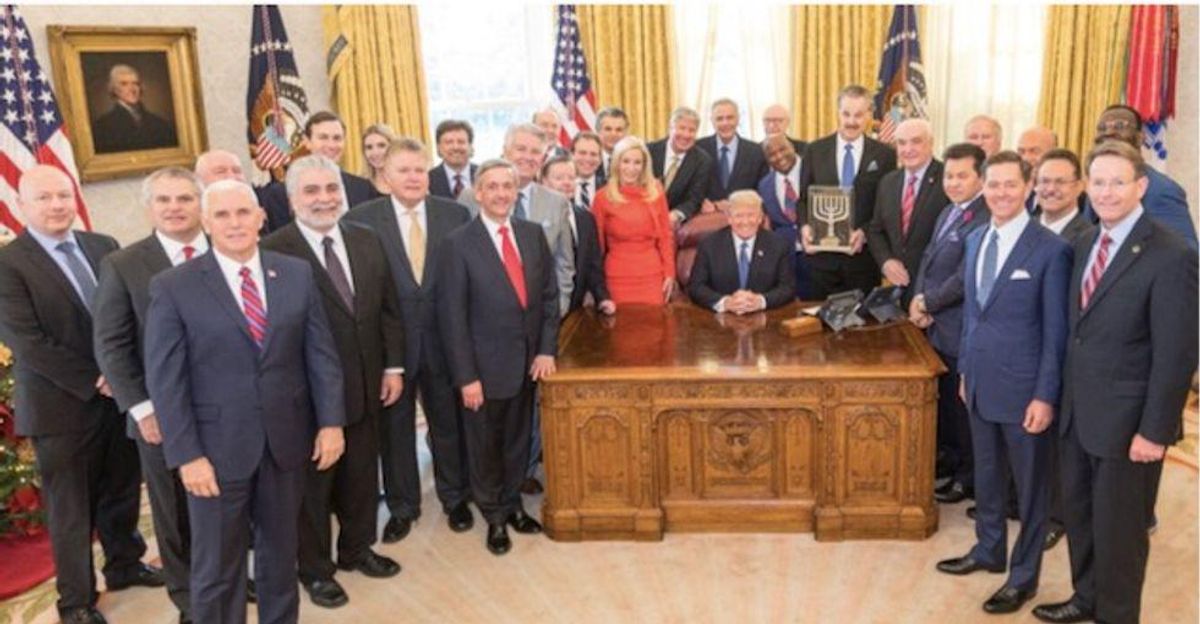 As a pastor I was always uncomfortable using God's word to pressure people to give money to the church. It seemed like a dirty trick: Play on the fear of disappointing God by convincing people on fixed incomes to provide for my livelihood. So I never did, much to the chagrin of my board of trustees. For the past 70 years, however, evangelical leadership has used this fear of God to raise billions of dollars to fight those the evangelicals have deemed to be the enemies of God. This naturally requires a private jet, a television network, a super PAC and a con artist pastor and politician to lead the way.

The first set of enemies were of course the feminists, the pro-choice advocates and the LGBTQ community. Jerry Falwell Sr. said in 1980, "We must stand against the Equal Rights Amendment, the feminist revolution and the homosexual revolution." From that point forward, the blueprint to effect political change for God — and to raise money for that cherished cause — was created. God's call was clear, or so the congregations were told, and the enemies were equally clear. The evangelical movement was born and money started flowing to numerous evangelical organizations. Politicians used evangelical language to win elections, and the God vote became more and more aligned with the Republican Party.

My problem is that the Christian faith was lost — as I have argued previously in Salon — during these massive fundraising campaigns. Donald Trump and the evangelical political machine raised millions of dollars, while completely removing anything that even remotely looked like the Christian faith. I believe a Christian reformation in American evangelical politics is desperately needed — not only to save my beloved faith, but to save the country.

True reform of the evangelical political machine will never happen, however, as long as the current evangelical leadership holds the reins. Understand that the leaders who have recently been fighting for control of the Southern Baptist Convention are no different than Jerry Falwell Sr. or Pat Robertson in the past, or Robert Jeffress and Franklin Graham today. These new evangelicals feel the need to be more discreet about their homophobia and anti-equality agenda. Perhaps they will even reject Trump now that he's no longer president, but do not expect them to show up at the next Pride rally or Black Lives Matter march. The problem here is that this relationship between the evangelical leadership and the Republican Party has become what Christians call a covenant.

Over the last 70 years, Christian theology has been steadily replaced, within the evangelical world, by Republican or "conservative" ideology. I noticed this in my time at an evangelical seminary and during my years in ministry, whenever political discussion would go beyond abortion and gay rights. When the conversation turned towards gun rights, immigration, taxing the wealthy, education or health care, the tenets of Christian theology disappeared behind Republican talking points.

The evangelical political message was that the Bible should be used in politics to attack certain people, but never to question oneself. That's how you get people to donate: Make the enemy clearly visible and easily definable. That's why the Bible is almost never used in politics as a justification for serving the poor, welcoming the foreigner, healing the sick or promoting equality. That agenda is not likely to motivate donations from wealthy white heterosexual men. Therefore, over time the evangelical message became that "American" and "Republican" were more important labels than "Christian" — or that they were effectively the same thing.

This shift is most obvious around the issues of gun rights and immigration. If you want to reject the foreigner, build a wall and own a private artillery, go right ahead. That is your right. But it is not your right if you sincerely want to follow the teachings of Jesus. We are not gun owners; we are pacifists. We are not provided with the gift of freedom and independence by God just to make sure no one else can have it.

The ugliest part of this agenda is that evangelicals have come to believe in rejecting the foreigner and keeping their guns because they are protecting what is "rightfully theirs." A true Christian should understand that nothing except condemnation is rightfully theirs. This country, their home, their freedom and their very lives belong to God. So how in God's name can a Christian support an agenda based on violence and racism?

I have never understood the appeal of gun culture, but I understand that Jesus was a man of peace. He certainly had a large enough following to fight back with force against the false sedition charges brought against him. With one speech, Jesus could have caused great political and religious difficulty in Jerusalem by doing what Trump did on Jan. 6. But that is not the Christian way.

When one of Christ's disciples did use a weapon to defend Jesus, his words were clear: "Put your sword back in its place, for all who draw the sword will die by the sword." That should be enough for any follower of Jesus. We are not commanded to be violent people. If there is an enemy, we are to love that enemy and pray for that enemy, not murder that enemy.

This issue around immigration is quite clear in the Bible. Leviticus 19 tells us, "The foreigner residing among you must be treated as your native-born. Love them as yourself, for you were foreigners in Egypt." There is no greater call on a Christian than to embrace the foreigner. In fact, there is a theory that if a Christian does not accept the foreigner, then God may reject that Christian at those pearly gates of heaven.

Evangelical leaders have focused their agenda on protecting things they feel entitled to, while focusing the attention of their followers on what they define as the enemies of God. That fear of God's enemies has allowed billions of dollars of donations to flow into the hands of religious hypocrites. They have convinced millions of Christians that the enemies of God are people who live south of the border, who are coming for their guns, their jobs, their property, their health insurance, their taxes and even their families. Trump tapped masterfully into the fear planted by evangelical leaders in the hearts of their followers. In the end, millions of Christians have abandoned their faith for a narrow-minded political ideology.