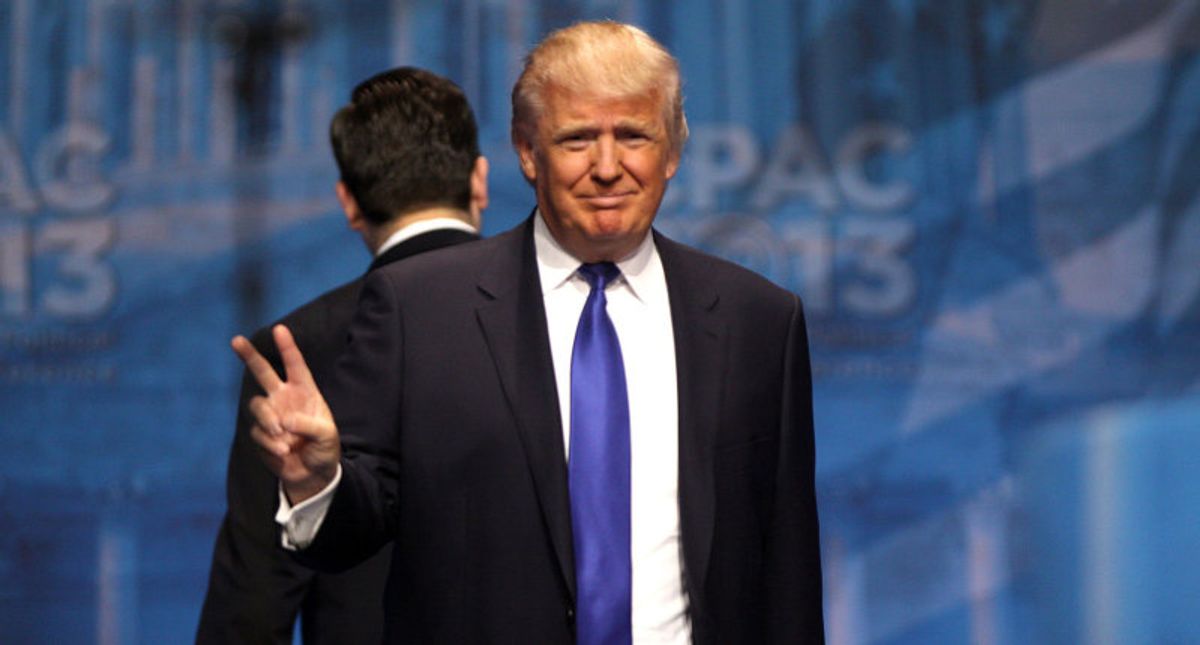 Yet Inauguration Day came and went in relative peace.

The calm was maintained not just in D.C., where the presence of 25,000 National Guard troops was an intimidating deterrent to would-be insurrectionists, but the planned pro-Trump protests at state capitols barely materialized — with mostly a few disparate and sad sign-wavers, rarely numbering more than a dozen at any single location. Outside the perimeter in D.C. set up by the National Guard, journalists outnumbered the Trump supporters so badly that any redhats who bothered to show up got swarmed by photographers. Only Portland, Oregon seemed to have seen any real violence, possibly only because the antifa and fascist groups that have spent the past four years street fighting there seemed interested in one final go-round.

There's a number of reasons that Inauguration Day ended up being relatively peaceful.

For one thing, legal authorities took the threat seriously and took significant preventive action. For another, the mass arrests of the insurrections by federal law enforcement sent a signal that the impunity that Trump supporters were feeling was misplaced. But most importantly, the main driver of insurrectionist sentiment and the man who instigated the Capitol riot — Donald Trump — wasn't on hand to incite more violence.

Without their leader directing their energies and giving them targets, the violent right was aimless and confused — and not organized enough for another strike.

While conservatives are already trying to muddy the waters around Trump's responsibility for the events of January 6, the record is quite clear. He repeatedly — in debates, in interviews, and at rallies — made winking references to his far right supporters, encouraging their violent urges. He repeatedly signaled that January 6 was the day of action. Even the wifi password at Trump's Georgia rally two days before the riot reinforced this target date to his most fanatical supporters.

And, of course, Trump gave a speech on January 6 with a fairly explicit "go" order in it, telling his supporters to march on the Capitol and falsely claiming he would join them.

But while Trump had many ways to communicate with the delusional fanatics that love him so much, it was his Twitter account that was probably the most important. Trump repeatedly pushed the January 6 date on Twitter, promising it "will be wild!" Even during the riot, Trump was directing the crowd, tweeting vitriol about then-Vice President Mike Pence in the midst of the violence. Unsurprisingly, the crowd's energies turned towards finding Pence, while chanting, "Hang Mike Pence".

Twitter temporarily suspended Trump's account after the riot and then, after briefly letting him back on, permanently banned him when he went straight back to lying about the election and stoking the violent impulses of his followers. Facebook and other social media platforms also cut Trump off. There was also a purge of QAnon accounts and others who were spreading lies about Joe Biden "stealing" the election.

The positive effects of the Trump social media ban were felt immediately. The analytics firm Zignal Labs showed that Twitter experienced 73% drop in misinformation about election fraud in the week after Trump and some of his most avid fans were banned from the platform. It underscores how dependent right-wing extremists are on their ringleaders, including Trump, and how many of them are uncertain what to do or what lies to spread without guidance. Frankly, it's unsurprising. These folks are authoritarians. Following their preferred authority figures is the whole point of it.

That Trump was going to start losing his hold over his fanatical supporters was likely inevitable. They weren't ever really in it because of some great love for him, so much as they saw Trump as the most effective tool they could use to stick it to the liberals. Without political power, Trump's usefulness to his followers has disappeared, and their enthusiasm appears to be dissipating at a rapid rate. The New York Times reports that the Proud Boys are rapidly shifting from calling Trump "Emperor" to whining that he's a "total failure". QAnon chatboards were reeling in disbelief, as it became clear that Biden's inauguration was really happening and the promised mass arrests of Democrats were not materializing. One of the most popular Trump fan boards, The Donald, has rebranded under the even stupider name Patriots win.

Still, there remains a danger that Trump could build up a myth of himself as a rightful-king-in-exile with these people. Without Twitter, however, it's going to be much, much harder — if not impossible. Trump loved Twitter because it allowed him to spread misinformation with less effort than it takes to make a phone call. Trump is both lazy and dumb, and clearly is struggling to imagine how to rally support without tweeting his every errant thought during his "executive time". His efforts at communicating with his base in the two weeks since his Twitter ban have been lackluster at best, and mostly non-existent.

And we're all so much better for it. Without Trump giving both direction and permission to the violent urges of his followers, they are adrift, and seemingly starting to absorb the idea that there may actually be consequences for their actions.

To be certain, the authoritiarian movement Trump breathed so much life into isn't going away. Republican voters have been radicalized — nearly three-quarters are continuing to assert misinformation about the 2020 election — and it's unlikely they are going to start feeling warm towards the democratic system again, just because Trump isn't riling them up every day. There's also still plenty of outlets for right-wing misinformation, including Fox News. The threat of domestic terrorism is still incredibly high, especially as so many domestic terrorists are self-directed instead of attached to organized conspiracies.

Still, without a strong central figure to rally around, the seditionist crowd will likely fracture into hundreds of small communities, and get weighed down by in-fighting, as often happens with the deeply unpleasant and aggressive personalities that are drawn to authoritarian politics. A lot of them may even drift away, looking for some other fringe community to give their lives meaning.

So while it's hardly some cure-all for the problem of growing authoritarianism or right-wing domestic terrorism, keeping Trump off social media is still crucial to protecting lives and protecting American democracy. And, while I doubt they'll listen, social media networks should also snuff the accounts of any would-be Trumps, who are getting attention and likes for spreading lies online. And if they don't, Congress should step in and regulate these companies so that they have no other choice.