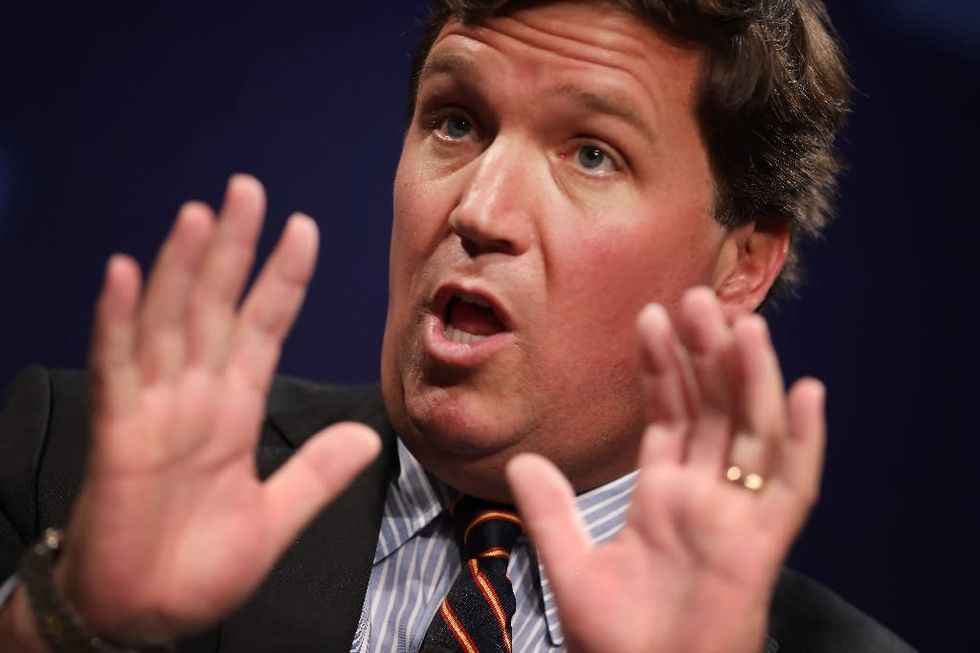 Fox News host Tucker Carlson, pictured in 2019, has soared to the heights of American cable TV

Washington (AFP) - In the world of Tucker Carlson's hit TV show, America is under assault -- by Democrats, by health authorities, by immigrants, by Black Lives Matter protests -- and white conservatives are in a fight for their very survival.

Anti-white racism is on the rise. Modern liberals hate Christianity. Migrants are invading. These are just a few of the claims made by the host of "Tucker Carlson Tonight."

In broadcast after broadcast, the 53-year-old appeals to viewers' outrage and plays on their fears, propelling his show to the heights of cable TV, making him millions of dollars, and providing ample fodder for conspiracy theorists and racists in the process.

Fox lawyers contended in court that Carlson presents opinions rather than facts on his show, which launched in 2016 and today draws millions of viewers per episode. But critics say the program could contribute to tragedies such as the racially motivated shooting that killed 10 people at a Buffalo, New York grocery store this month.

Blue eyes locked on viewers for an hour, five nights a week, Carlson discusses current events on a show billed as "the sworn enemy of lying," and which promises to "ask the questions that you would ask -- and demand answers."

Carlson frames the issues he discusses as "they" versus "you" -- "they want to control your thoughts," or "they call you a racist."

His appeals to fear are effective, said Jennifer Mercieca, a historian of American political rhetoric who teaches at Texas A&M University.

"Tucker Carlson is very good at eliciting that fear response in his audience," she told AFP. "He covers anything that he thinks will outrage his audience."

And therein lies the danger.

Payton Gendron, a young white supremacist accused of trying to kill as many African Americans as possible in the Buffalo shooting, was influenced by the "Great Replacement" theory, a far-right belief that the white population will be replaced by immigrants.

Carlson has spread a similar notion -- that Democratic politicians and other elites want to replace whites through immigration -- during more than 400 episodes of his show, according to The New York Times.

Citing this figure, Senate Majority Leader Chuck Schumer said: "This is a poison that is being spread by one of the largest news organizations in our country."

Contacted by AFP, Fox News referred to Carlson's on-air statements in which he has defended himself against accusations that he bears responsibility for the killings.

"Gendron was mentally ill," Carlson said Monday, dismissing the long manifesto by the suspect -- which does not mention the show -- as "not recognizably left-wing or right-wing, it's not really political at all."

Despite the criticism he engenders, Fox News backs Carlson at all costs.

The network's lawyers argued in a 2020 slander lawsuit that viewers knew to treat material on his show with skepticism -- something not borne out by the many people interacting with and spreading his content online.

The father of four seems impervious to criticism, saying in an appearance on "The Rubin Report" talk show: "You should only care about the opinions of people who care about you."

It is a lesson learned from what he has called his "weird childhood," marked by the departure of his artist mother when he was only six years old. She moved to France and never saw her children again.

Carlson was raised by his journalist father and followed in his footsteps after unsuccessfully trying to join the CIA.

The road to fame was long: Carlson previously worked at CNN and even found himself temporarily unemployed around his 40th birthday.

But Mercieca says he is now "uniquely powerful."

In evidence of Carlson's influence, Republican Ted Cruz willingly subjected himself to a dressing down on the Fox host's show in January after being widely criticized by conservatives for describing the January 6, 2021 riot at the US Capitol as a "violent terrorist attack."

Despite the political influence he wields, Carlson -- who says he has never owned a television -- lives far from the heart of the United States government, in a rural corner of Maine, where he usually records his show.

Will politics be the next step? For a time, there were rumors that he could parlay his fame into a 2024 run for the presidency.

Carlson dismissed the idea with a laugh on conservative podcast "Ruthless" in January.