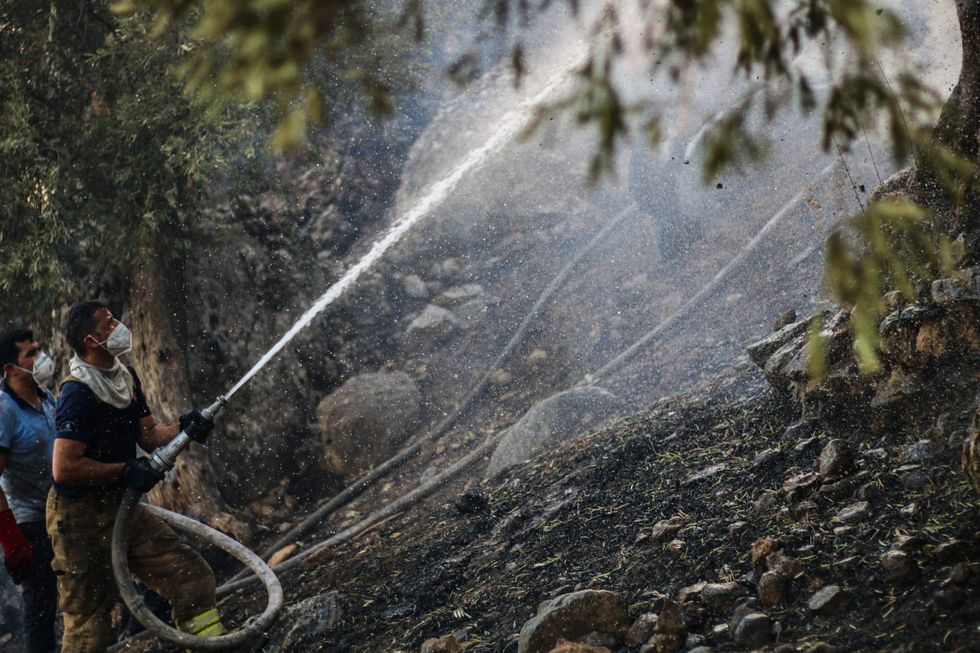 Firefighters work to extinguish burning trees as wildfires have been raging for nearly 10 days near Mugla. Hakan Akgun/SOPA Images via ZUMA Press Wire/dpa

More than 5,000 firefighters in Turkey, backed by aerial and ground support, battled the worst wildfires in over a decade on Saturday, while six fires are still out of control, Agriculture and Forestry Minister Bekir Pakdemirli said on Saturday.

Firefighters, joined by teams from at least six countries including Spain and Russia, have been trying to control the wildfires for 11 consecutive days under what Pakdemirli described as "extraordinary conditions," referring to high temperatures, humidity and wind.

Six of the 12 fires were extinguished in the course of the night, while a further six continued to burn near the coastal cities of Mugla and Aydin, Pakdemirli told reporters in Mugla.

Firefighters managed to bring some of the wildfires under control, in Antalya and in Mugla's Marmaris and Bodrum districts, popular tourist destinations, Pakdemirli added.

“We are facing a catastrophe that will be marked in history,” the minister said, adding there had been 16 major fires so far this year, compared to only four in 2020.

“I thank our teams for their heoric efforts and for risking their lives without a break,” Pakdemirli added.

The country has fought a total of 225 wildfires across 47 cities and provinces since July 28, according to official data.

During the night, the fires spread in Mugla's Koycegiz and Milas districts, while three neighbourhoods were ordered to evacuate, the local authorities said on Saturday.

In Milas, a fire near a coal-fired power plant was brought under control but teams were on alert in case wind sparked the blaze again, Pakdemirli said.

Volunteers joined firefighting efforts across Mugla, while teams continued to cool some areas and assess the damage. Others worked to offer shelter and food to animals affected.

President Recep Tayyip Erdogan said a total of 5,250 firefighter crew had been dispatched to disaster areas, backed by more than 80 helicopters, firefighter planes and drones and 1,000 trucks and vehicles, in a tweet on Friday evening.

At least eight people have died and 100,000 hectares of forest and fields have been destroyed, according to estimates, with more than 64,000 hectares destroyed in Mugla alone.