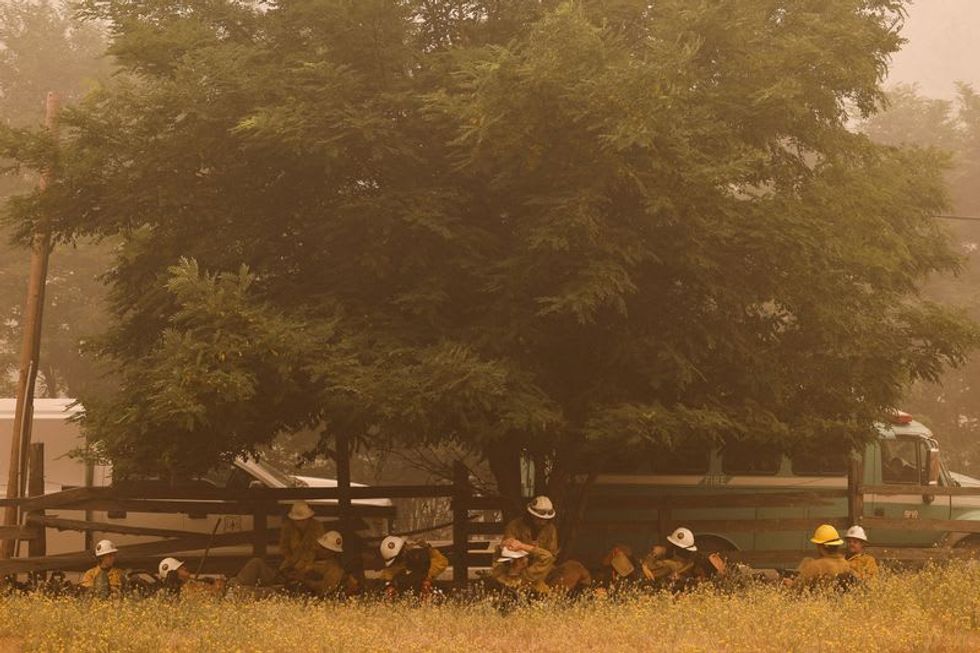 YREKA, Calif. (Reuters) - Two bodies were found inside a burned-out car in the path of a huge wildfire raging near California's border with Oregon, authorities said on Monday, as heavy smoke limited efforts to deploy aircraft to contain the blaze over the weekend.

Since it broke out on Friday, the fast-moving McKinney Fire has forced at least 2,000 residents to evacuate while destroying homes and critical infrastructure, mostly in Siskiyou County, home to Klamath National Forest, according to a release by Governor Gavin Newsom on Sunday.

Two other fires in the county have forced at least 200 residents out of their homes, it said. Those fires grew to more than 1,700 acres combined as of Sunday, the U.S. Forest Service said.

Already the largest blaze in this year, the fire had scorched 52,498 acres (21,245 hectares) and was 0% contained, the California Department of Forestry and Fire Protection, or Cal Fire, said in a Sunday evening update.

The two bodies were found on Sunday in a car parked in a residential driveway west of the community of Klamath River, the Siskiyou County Sheriff's Office said in a statement on Monday. It said it would have no additional information about the deaths pending identification and notification of next to kin.

More than two decades of drought and rising temperatures,exacerbated by climate change, have made California morevulnerable than ever to wildfires. The two most devastatingyears on record were in 2020 and 2021 based on the number ofacres burned.

Heavy smoke above the fire region helped limit the growth of the McKinney Fire on Sunday but it also grounded aircraft used to fight the blaze, the U.S. Forest Service said in its statement.

Newsom declared a state of emergency for Siskiyou County on Sunday. The declaration will help residents gain access to federal aid and unlock state resources.

The famed Pacific Crest Trail crosses the area along theCalifornia-Oregon border where the fire was burning. According to the Jackson County Sheriff's Office, at least 60 hikers had been located on the trail in the Klamath National Forest and escorted to safety.

The McKinney Fire was the second major wildfire to erupt in California this season. The Oak Fire near Yosemite National Park was 67% contained after charred more than 19,244 acres, Cal Fire said on its website.