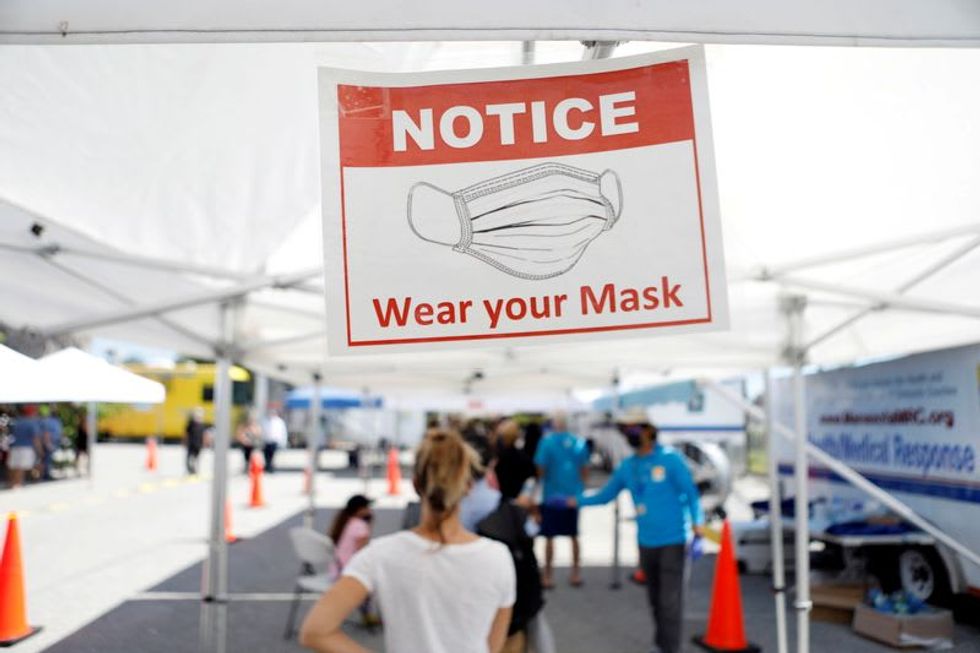 (Reuters) - The United States hit a six-month high for new COVID cases with over 100,000 infections reported on Wednesday, according to a Reuters tally, as the Delta variant ravages areas where people did not get vaccinated.

The country is reporting over 94,819 cases on a seven-day average, a five-fold increase in less than a month, Reuters data through Wednesday showed. The seven-day average provides the most accurate picture of how fast cases are rising since some states only report infections once or twice a week. (Graphic on U.S. cases and deaths) https://tmsnrt.rs/2WTOZDR

In the coming weeks, cases could double to 200,000 per day due to the highly contagious Delta variant, said top U.S. infectious disease expert Dr. Anthony Fauci on Wednesday.

"If another one comes along that has an equally high capability of transmitting but also is much more severe, then we could really be in trouble," Fauci said in an interview with McClatchy https://www.mcclatchydc.com/news/coronavirus/article253248688.html. "People who are not getting vaccinated mistakenly think it's only about them. But it isn't. It's about everybody else, also."

The Delta variant, first detected in India, accounts for 83% of all new cases reported in the United States, according to the Centers for Disease Control and Prevention.

Vaccination rates vary widely from a high of 76% of Vermont residents receiving a first dose to a low of 40% in Mississippi, with polls showing Republicans are far less likely https://graphics.reuters.com/HEALTH-CORONAVIRUS/MICHIGAN/azgpoxymkvd than Democrats to get vaccinated.

Deaths, a lagging indicator, jumped 33% over the past week, with about 377 deaths per day on average, according to the analysis.

Southern states, which have some of the nation's lowest vaccination rates, are reporting the most COVID-19 cases and hospitalizations. Florida, Texas and Louisiana were reporting the highest total number of new cases in the region over the last week, according to a Reuters analysis.

President Joe Biden on Tuesday urged Republican leaders in Florida and Texas - home to roughly a third of all new U.S. COVID-19 cases - to follow public health guidelines on the pandemic or "get out of the way".

To try to halt the spread of the virus, New York City will require proof of vaccination at restaurants, gyms and other businesses. Roughly 60% of all New Yorkers have received at least one dose of the COVID-19 vaccine, according to city data. But certain areas, largely poor communities and communities of color, have much lower vaccination rates.

Some private companies are also mandating vaccines for employees and customers.

The U.S. Food and Drug Administration plans to give full approval for the Pfizer COVID vaccine by early September, the New York Times reported on Tuesday, which could prompt more Americans to get the vaccine as it might reduce their fears about the safety of the shot.

(Reporting by Roshan Abraham in Bengaluru; Editing by Lisa Shumaker)