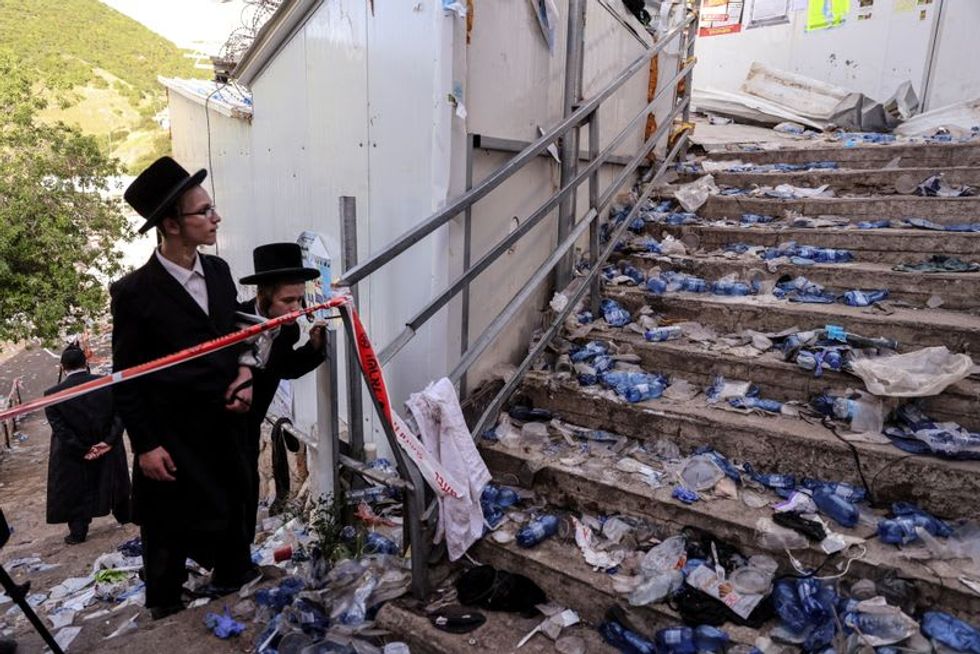 JERUSALEM (Reuters) -U.S. citizens are among the dozens killed and injured in a stampede at a religious festival in Israel, the U.S. Embassy said on Saturday, as criticism mounted in the wake of one of the biggest civilian disasters in the country's history.

At least 45 people were crushed to death and more than 100 injured at the ultra-Orthodox Jewish festival on the slopes of Israel's Mount Meron, held overnight between Thursday and Friday.

The exact cause of the disaster is still not clear but witness accounts and videos posted on social media suggested that some people had fallen down stairs leading out of a narrow passageway packed by hundreds of worshippers trying to exit the site, as a surge of people came down upon those ahead of them who had fallen, being trampled and asphyxiated.

One witness described seeing a pyramid of people piling up one on top of the other. Authorities said there were children among those hurt.

Avigdor Hayut, injured in the crush, lost his 13-year-old son. He said they were caught under a mass of people.

"I was on the floor. Twenty seconds stood between me being with him now, no more. I was already numb and my vision was blurred," he told reporters before he was released from hospital to attend his son's funeral.

"My son was screaming t to me 'daddy I'm going to die,'" Hayut said. "They got me out at the last minute."

The Health Ministry said 32 of the dead had been identified by late Friday. The identification process paused for 24 hours in observance of the Jewish Sabbath and resumed on Saturday evening as families prepared for burials.

Around 20 of the people injured were still in hospital by Friday night. More than 2,000 Israelis across the country responded to an emergency call for blood donations, according to Magen David Adom, Israel's ambulance service.

A U.S. Embassy spokesperson said: "We can confirm that multiple U.S. citizens were among the casualties".

Those included both dead and injured. The U.S. Embassy was trying to verify if any more U.S. citizens were involved and is providing all possible consular support to affected U.S. citizens, the spokesperson said, declining to comment further.

U.S. media have identified some of the dead, including a 19-year-old American citizen who was in Israel on a gap year.

Canadian Prime Minister Justin Trudeau said on Friday that two Canadians were killed in the disaster.

Condolences poured in from leaders around the world, including U.S. President Joe Biden and Palestinian President Mahmoud Abbas.

The Justice Ministry said investigators would look into whether there had been any police misconduct connected to the tragedy and Prime Minister Benjamin Netanyahu promised a thorough investigation to ensure it did not happen again.

Public Security Minister Amir Ohana and the Police Commissioner Yaakov Shabtai both said on Saturday they will co-operate fully with any probe.

A dozen people protested outside Ohana's home in Tel Aviv, spelling out the word "shame" with lit candles.

There had been concern for years about safety risks at the annual event, held at the tomb of a 2nd-century Jewish sage in the Galilee.

Anger has mounted at the government and the police for allowing the event to go ahead despite its size far exceeding the coronavirus restrictions on gatherings. An estimated 100,000 packed the festival.

Some critics said politicians had caved to pressures of ultra-Orthodox leaders who are presently allied with Netanyahu but have flouted the state's authority for years.

"The government wouldn't consider any restrictions for fear of its Haredi (ultra-Orthodox) partners. And as far as physical safety was concerned, this year wasn’t any different from previous ones. Warnings of a potential disaster have been heard many times before, including from members of the Haredi community, but the traditions must not be changed," wrote Anshel Pfeffer, an analyst for the left-wing Haaretz newspaper.