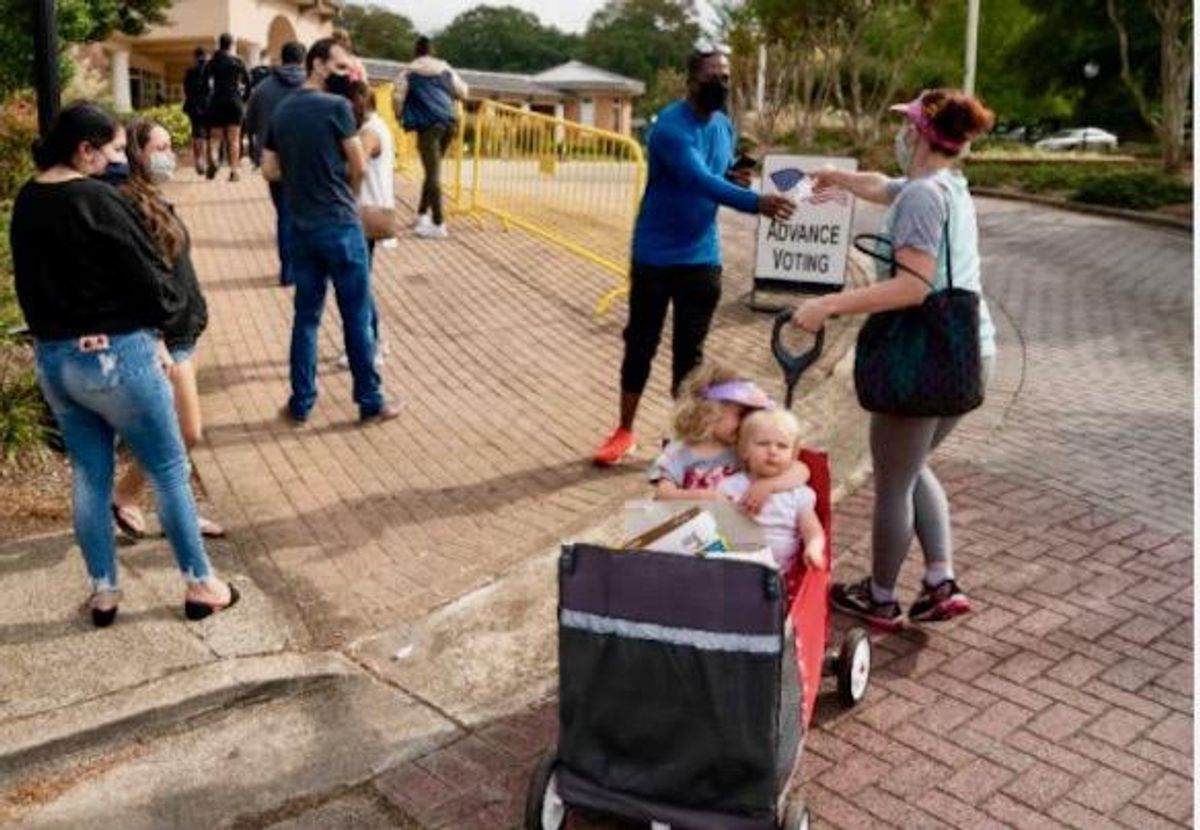 Now banned: Megan Dominy and her two children hand out bottles of water to people waiting in line to vote in the city of Smyrna, Georgia during the 2020 US election(AFP)

"For American democracy to work for any of us, we must ensure the right to vote for all of us," according to the statement published as a two-page advertisement prominently displayed in The New York Times and The Washington Post.

"We all should feel a responsibility to defend the right to vote and to oppose any discriminatory legislation or measures that restrict or prevent any eligible voter from having an equal and fair opportunity to cast a ballot."

The declaration came after Georgia's Republican governor signed into a law a measure imposing voter identification requirements, limiting the number of voting drop boxes and hours at polling places, and forbidding volunteers from giving water bottles to voters who can be forced to wait in line for hours.

The restrictions have been met with a mounting wave of public critcism and boycotts from corporations, sports and entertainment bodies.

Georgia was one of the most hotly contested states in the 2020 election, when President Joe Biden narrowly prevailed over Donald Trump, who claimed falsely that he lost Georgia due to voter fraud.

High turnout, especially by Black voters, was key to Biden's victory, and in runoff elections for the two Georgia Senate seats which ultimately gave Democrats control of that chamber by the slimmest of margins.

Legislators in 43 states have introduced more than 250 bills that would make it harder to vote in response to the former president's "continued lies about voter fraud," according to the Brennan Center for Justice, a progressive think tank.

Michigan is among those states, and on Tuesday major companies based there, including automakers Ford and General Motors, released a letter saying "government must avoid actions that reduce participation in elections."

Georgia-based companies Coca-Cola and Delta Air Lines slammed the new law in statements last month, while Major League Baseball decided to move its All-Star Game out of Atlanta after the law's passage, and a major Hollywood movie production pulled out of the state.

Republicans have responded with calls for a boycott of baseball as well as Delta.