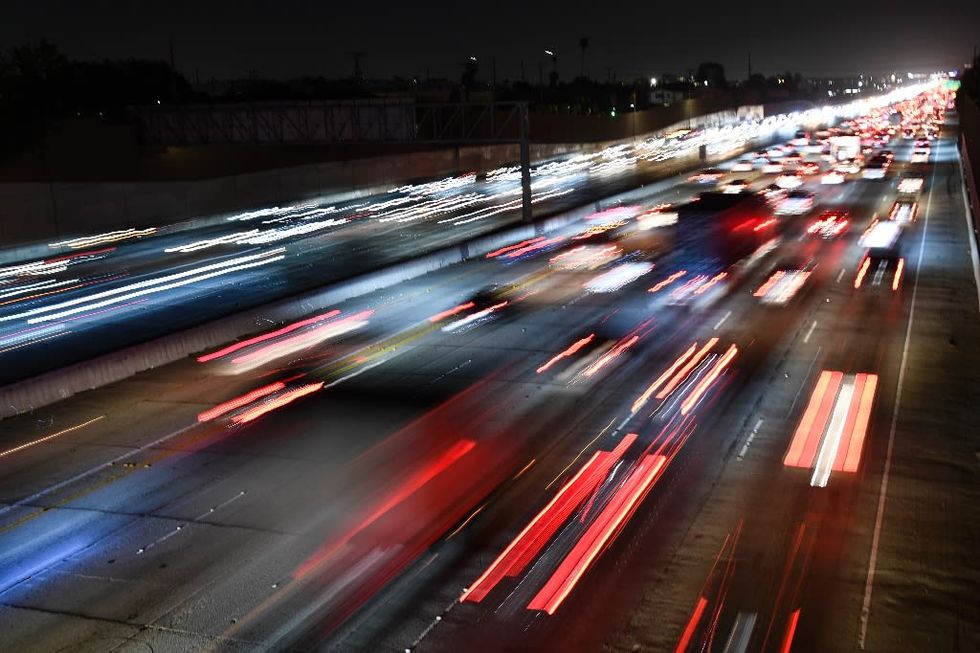 Democrats say Big Oil is 'ripping off' US motorists, like these pictured during rush hour in Los Angeles

US Democrats announced legislation Thursday to punish fuel companies they accuse of unfairly raising prices at the pump, as record inflation threatens the party's prospects in November's midterm elections.

The reforms would allow regulators to impose heavy fines on companies exploiting the war in Ukraine and a pandemic-related surge in crude prices to cash in at the expense of American motorists.

"At this time of war -- at any time -- there is no excuse for Big Oil companies to profiteer, to price gouge or exploit families," House Speaker Nancy Pelosi told a news conference.

"That is why Democrats are moving forward with forceful action that will stop, and hold accountable, oil and gas companies for profiteering and manipulating markets."

The push comes with gasoline prices skyrocketing from an average of $2.89 a gallon a year ago to $4.14, according to data published by AAA on Thursday.

The Democrats' proposals would give the Federal Trade Commission and individual states increased authority to go after businesses that manipulate prices in both wholesale and retail sales.

They are hoping to pass legislation before the end of May but would need support from Senate Republicans, who are pressing instead for hikes in domestic fossil fuel production.

House Energy and Commerce Committee Chairman Frank Pallone said however that oil giants were "ripping off the American people" by suppressing production to maximize profits.

Maria Cantwell, Pallone's counterpart in the Senate, said elevated pump prices were driving inflation -- which is at a 40-year high -- and threatening the post-pandemic recovery.

"In the state of Washington, many of my constituents are paying $4.50 a gallon and that means that average Washington drivers will be forced to shell out $750 more to fill up this year than they did in 2021," she said.

The American Petroleum Institute suggested however that the Democrats' announcement amounted to "political posturing" rather than a genuine attempt to fix rising costs.

"This is an industry of price takers, not price makers, and repeated in-depth investigations by the FTC have shown that changes in gasoline prices are based on market factors and not due to illegal behavior," senior vice president of policy, economics and regulatory affairs Frank Macchiarola told AFP.

"The price at the pump that Americans are currently paying is a function of increased demand and lagging supply combined with geopolitical turmoil and policy uncertainty from Washington."

In March, President Joe Biden announced a record release from US strategic oil reserves of a million barrels per day for six months to "ease the pain" of soaring prices.

Some Democrats facing tough re-election fights in November have also floated a federal gas tax holiday that would save motorists around 18 cents a gallon, but Pelosi appeared to rule out the idea.

"There had been some interest in the holiday. The pros of it are that it's good PR," she said.

"The cons are that there's no guarantee that the saving... would be passed on to the consumer. We have no evidence to think that the oil companies would pass that on."

US Energy Secretary Jennifer Granholm argued at a House Energy and Commerce Committee hearing on Thursday that the Ukraine invasion underlined the need for Americans to stop relying on the volatile oil market.

"Ultimately, these crises tell us that global energy security, energy independence and energy affordability all depend on a shift toward American-made clean energy," she said.