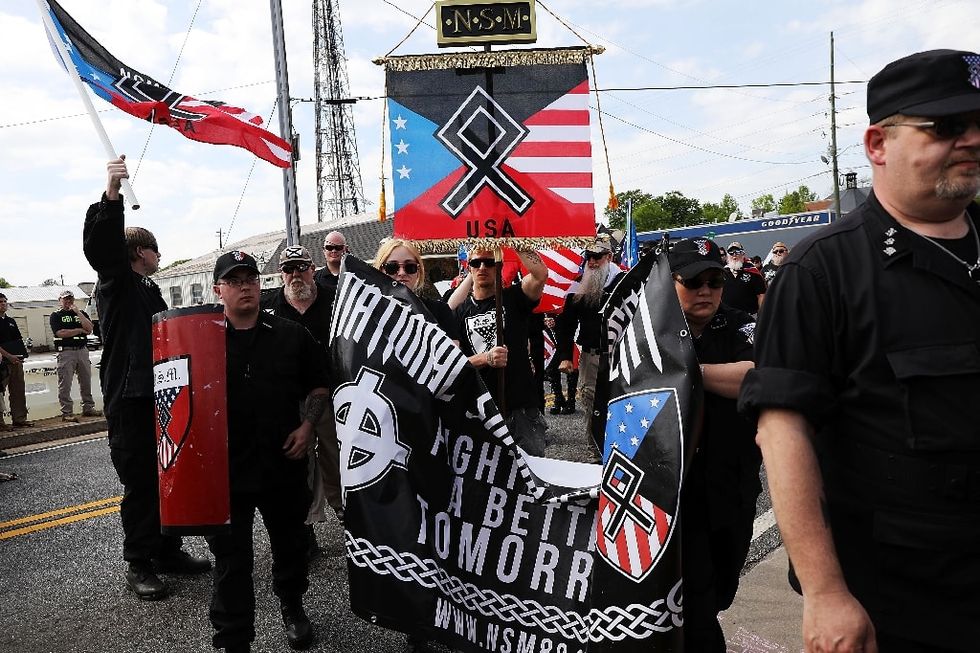 Members and supporters of a US neo-Nazi group, the National Socialist Movement, at a 2018 rally in Georgia

Cameron Shea, 25, was arrested with three others in early 2020 after they were spotted conspiring in an encrypted online chat group to threaten mainly reporters and advocates, mostly Jewish or people of color, the department said.

They "created posters, which featured Nazi symbols, masked figures with guns and Molotov cocktails, and threatening messages, to deliver or mail to the journalists or advocates the group targeted," it said.

Shea said he wanted a "show of force" from his Atomwaffen organization against the targets, with members putting posters up on their homes.

One poster showed a Grim Reaper-like figure with a skeleton mask and a Molotov cocktail alongside the text: "Our Patience Has Its Limits... You have been visited by your local Nazis."

The four were arrested in a cross-country sweep against the violent group. Five others were charged in Alexandria, Virginia, for organizing dangerous "swatting" attacks that call police to target victim's homes.

Shea admitted conspiracy and hate crimes charges in federal court in Washington state that could together bring up to 15 years in prison.

He will be sentenced on June 28.

Two others in his group have already admitted similar charges: Roman Garza was given 16 months in prison and Taylor Ashley Parker-Dipeppe was sentenced to time served, the judge acknowledging his difficult childhood as a transgender man physically abused by his father.

The fourth, Kaleb Cole, has pleaded not guilty and will go on trial in September.