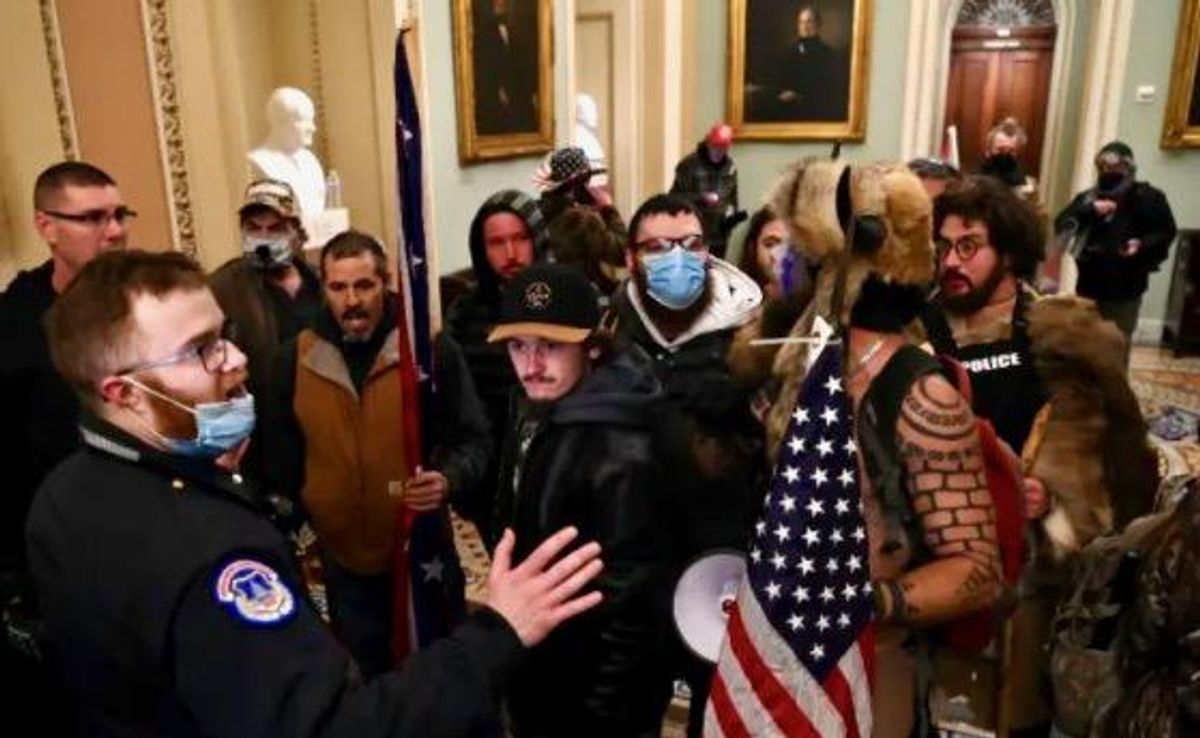 They swore to serve and protect. But, a week after extremists stormed the US Capitol, police departments and military branches across America are investigating reports some of their own formed part of the mob.

From Ashli Babbitt, the Air Force veteran shot dead as she tried to force her way toward the House chamber, to retired Air Force reserves, Army officers and law enforcement from Seattle to New York, reports have emerged of off-duty police and former members of the military participating in the riot.

The reports have forced a spotlight on a threat that experts have long warned about, largely in vain: extremism and white supremacy within American security forces.

"We've neglected this threat for ten years. Ignored it, minimized it, turned a blind eye to it. This administration has actually coddled these people, calling them special," said Daryl Johnson, a former Homeland Security domestic terrorism team leader and intelligence analyst, who served from 2004 to 2010.

Christian Picciolini, a one-time white supremacist who now works to deradicalize extremists with The Free Radicals Project, said he was not surprised some police and ex-military were among the rioters on January 6 seeking to overturn the election results.

"It has long been an effort by white supremacists to infiltrate and recruit from the pool of law enforcement, military and other first responders," Picciolini said.

The fears extend to the Capitol Police, the agency in charge of securing the building.

Several officers have been suspended and around a dozen are being investigated after reports of taking selfies with the mob and videos which seem to show them allowing protesters into the building.

In 2006, the FBI published a report on infiltration of law enforcement by white supremacist groups, and in 2009, the Department of Homeland Security issued a warning authored by Johnson about infiltration in the military.

Both times, the warnings largely fell on deaf ears.

"When that 2006 report came out it was just after 9/11 and no one wanted to focus on domestic terrorism," said Georgetown University Associate law professor Vida Johnson.

As for the warning in 2009, "the new Obama administration didn't have the political capital to take that on, particularly with a Black president," she said.

"So here we are 11 years after that, having taken no concrete steps to weed white supremacists out of policing or the military."

The problem has been around since long before Donald Trump announced his presidential campaign in 2015.

But, experts say, since then he has given such extremist views a platform, and there is a straight line between his rhetoric and the riot at the Capitol.

"He's directly responsible for it. He invited everyone to the Capitol... and the Stop The Steal campaign (to overturn the results of the presidential election) has been an intentional disinformation campaign meant to rile people up," said Lecia Brooks of the Southern Poverty Law Center, which tracks hate groups.

Trump's strongest support comes from white men, Vida Johnson pointed out -- the same demographic which dominates representation in law enforcement, meaning it is "not a surprise" that the two groups overlap.

When confronted with the problem in the past, some police departments have cited another favoured Trump talking point: free speech.

Daryl Johnson recalled reaching out to a police department in 2017 when his research found more than 100 officers identifying themselves on social media as Oath Keepers, a far-right anti-government extremist group known for recruiting military and law enforcement members.

They said the posts fell under the First Amendment, he told AFP, despite his warning that their allegiance to the Oath Keepers could come before the department.

Other experts have also dismissed the argument.

"If you took that job to protect citizens, even if you're a Trump supporter, your job is to protect all citizens," said Heather Taylor, a former homicide detective sergeant in St. Louis and spokesperson for the Ethical Society of Police, a group that fights racism in police departments.

With the problem finally receiving attention, experts are calling for renewed efforts to tackle it.

Taylor blamed much of the problem on police unions, which some observers say protect bad officers.

They "continue the divide between the police and the community," she said, calling for departments to have a zero tolerance policy for racist social media posts, and for accused officers to be put on unpaid leave while any investigation is conducted.

Vida Johnson also pointed to police unions, noting that they bar many issues of police discipline from being revealed to the public, and said better officer screening must take place.

Daryl Johnson, for his part, feared the Capitol riot was only the beginning of a darker period.

"What happened at the Capitol is a radicalization and recruitment opportunity for these groups," he said.