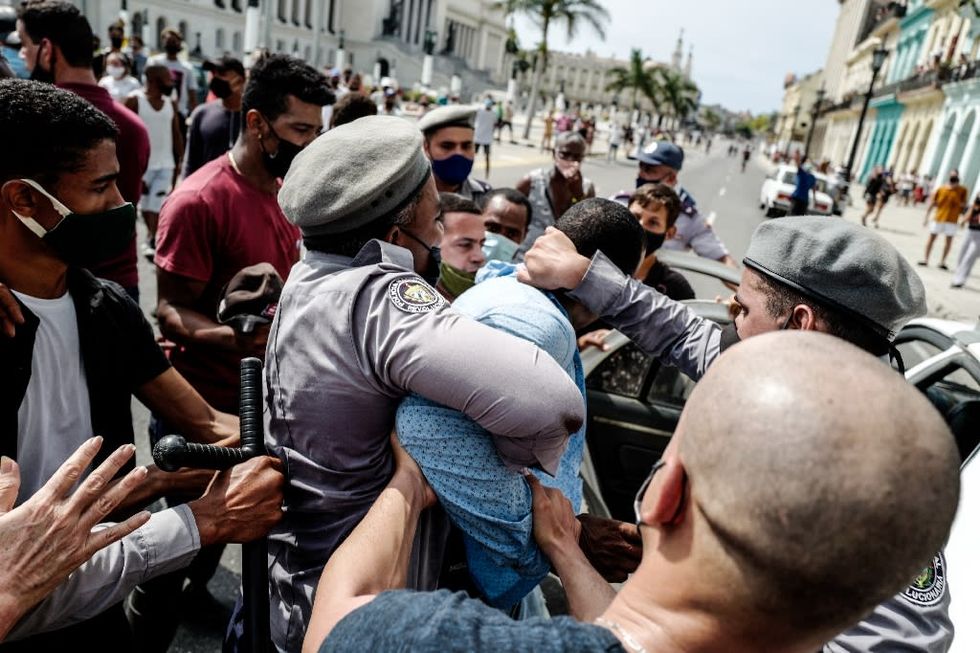 Independent observers and activists say at least 600 people were arrested in Cuba for protesting, many of whom remain behind bars

Washington (AFP) - The US slapped fresh sanctions Friday on Cuban police for suppressing anti-government demonstrations this month, with President Joe Biden warning additional punitive measures were in store if the communist-ruled nation does not undertake sweeping reforms.

"There will be more unless there is some drastic change in Cuba, which I don't anticipate," Biden told reporters before hosting a group of Cuban-American leaders at the White House.

Earlier in the day the US Treasury named National Revolutionary Police Director Oscar Callejas Valcarce and Deputy Director Eddy Sierra Arias to its sanctions blacklist, which freezes any property they might have in the United States and bars US transactions with them.

"The Treasury Department will continue to designate and call out by name those who facilitate the Cuban regime's involvement in serious human rights abuse," said Andrea Gacki, director of the Treasury's main sanctions unit, the Office of Foreign Assets Control.

On July 11 and 12, thousands of Cubans took to the streets, shouting "Freedom," "Down with the dictatorship" and "We're hungry" in the biggest protests since the revolution that brought Fidel Castro to power in 1959.

Hundreds of people were arrested and many face charges of contempt, public disorder, vandalism and propagation of the coronavirus pandemic for marching without face masks.

On July 24 a government official said about 60 Cubans had been prosecuted for participating in the demonstrations.

The Treasury said the NRP was the main unit of the Interior Ministry deployed to stifle the demonstrations and was responsible for beating a number of peaceful protesters.

On Friday Biden stood shoulder to shoulder with Cuban American leaders at a White House meeting.

"We hear your voices. We hear the cries of freedom coming from the island," the president said.

Biden has come under fire from Republicans who criticize what they say is his weak stance against Havana.

"Biden's lack of leadership is a disgrace and undermines the cause of freedom in Cuba and around the world," the Republican National Committee said in a statement.

The White House issued a forceful defense of the president, saying Biden has been watching developments on the island closely.

"He's made clear that Cuba is led by a failed and repressive regime, and that communism is a universally failed ideology," White House spokeswoman Karine Jean-Pierre said.

On Thursday the European Union called on Cuba to release people arrested "arbitrarily" during the protests.

"We are very concerned about the repression of these protests, as well as for the arrest of protesters and journalists," the 27-nation bloc said in a statement.

"We urge (the Cuban government) to release all arbitrarily detained protesters, to listen to the voices of its citizens, and to engage in an inclusive dialogue on their grievances."