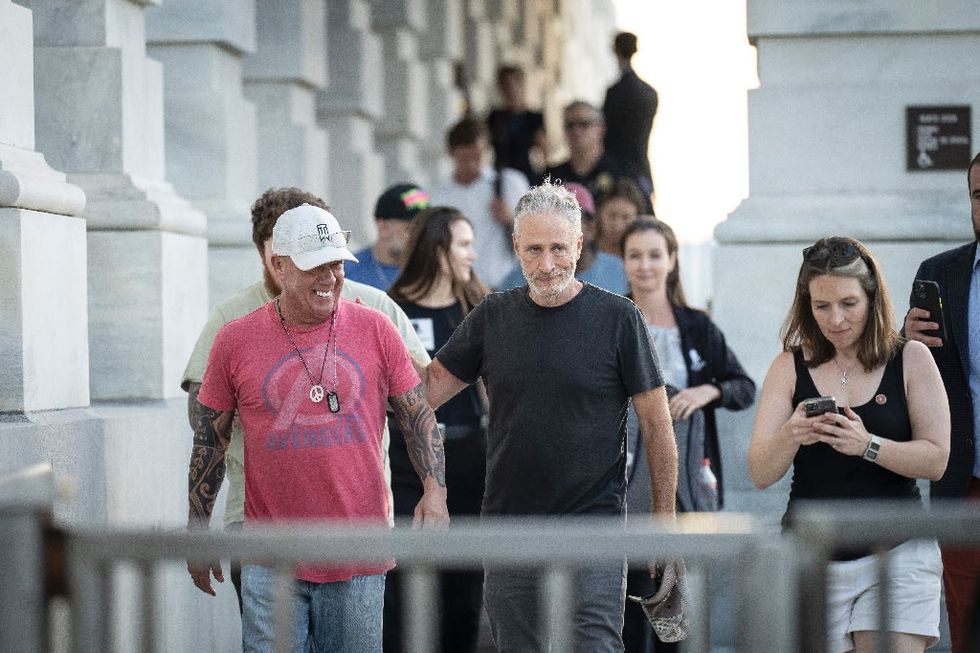 Activist John Feal (L) and comedian Jon Stewart (C) exit the US Capitol after the Senate passed the PACT Act in Washington, DC

Washington (AFP) - US senators on Tuesday approved benefits for veterans exposed to toxic burn pits, which President Joe Biden, who believes his son Beau died of such exposure, has called a "decisive and bipartisan win."

Open trash fires have been commonly used by the US military in conflicts after the September 11, 2001 attacks, and are lit to get rid of everything from plastic bottles to human waste and old tires -- all incinerated with jet fuel.

But the fumes from these holes in the ground are suspected of causing a range of illnesses among soldiers, from chronic respiratory ailments to a variety of cancers.

Biden believes the pits are at the root of the brain cancer that claimed the life of his son Beau, who served in Iraq in 2008.

By 86 votes to 11, the Senate passed the PACT Act, which expands the window of eligibility for free medical care and ensures that, for certain respiratory illnesses and cancers, veterans will get disability benefits without having to prove they were made sick by exposure to the pits.

The passage came just days after Republican senators had rejected the bill, triggering withering condemnation from veterans groups and activists, including the outspoken comedian Jon Stewart, who had championed the cause.

Biden welcomed the approval of the act, saying, "While we can never fully repay the enormous debt we owe to those who have worn the uniform, today, the United States Congress took important action to meet this sacred obligation."

He said the new law would be "the biggest expansion of benefits for service-connected health issues in 30 years and the largest single bill ever to comprehensively address exposure to burn pits."

Vice President Kamala Harris said that "too many of our veterans and their families have long waited for this day. With today's passage of the PACT Act, our veterans will finally see an expansion of their health benefits and proper care for burn pit exposure. They deserve it."

The Department of Veterans Affairs estimates that some 3.5 million US service members were exposed to toxic smoke in Afghanistan, Iraq or other conflict zones, and more than 200,000 veterans have registered on lists of people who came into contact with burn pits.

The Pentagon funded a $10 million study in 2018 that concluded there was "a potential cause and effect relationship between exposure to emissions from simulated burn pits and subsequent health outcomes."

Until now, nearly 80 percent of veterans' requests to have suspected burn pit ailments acknowledged by the government were rejected, according to the Iraq and Afghanistan Veterans of America (IAVA).

A poll by the organization found that 82 percent of those questioned said they were exposed to burn pits or other airborne toxic chemicals.

Of these people, 90 percent said they are or may be suffering from symptoms linked to that exposure.