'Vaccine tourists' fly from abroad for injections on Florida beach 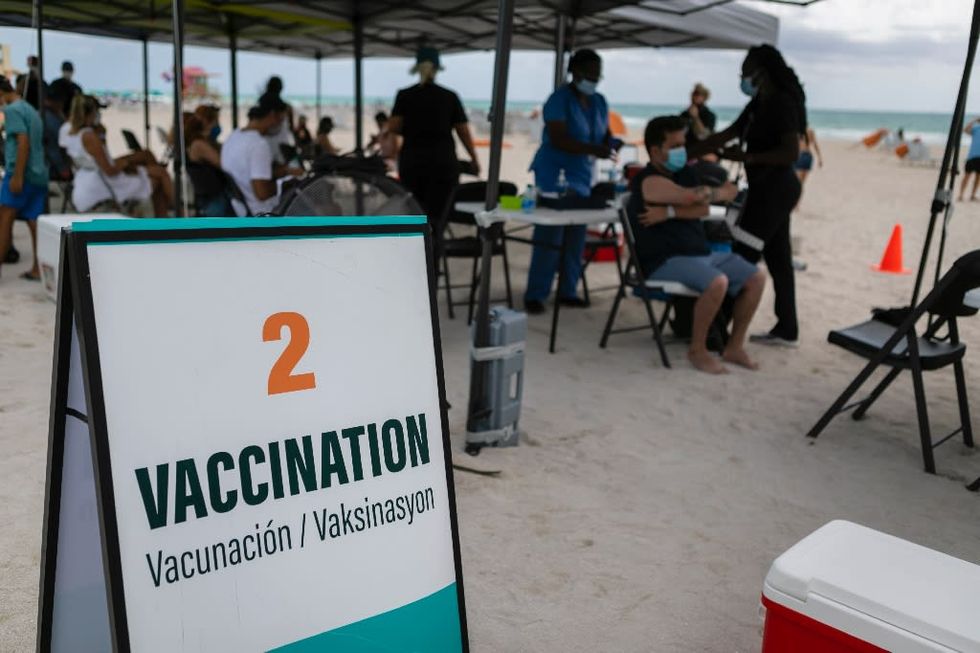 People get a Johnson & Johnson Covid-19 vaccine at a pop-up vaccination center at the beach, in South Beach, Florida, on May 9, 2021

Miami Beach (United States) (AFP) - A long line of people snaked across the sand of Miami Beach, Florida, as dozens of travelers from Latin America waited their turn at a pop-up coronavirus vaccination booth.

Sweating under the Sunday afternoon sun, visitors checked into an online system -- no proof of residence required -- and soon after received a free, single-dose Johnson & Johnson vaccine and a vaccination card.

People had come from all over Latin America -- Ecuador, El Salvador, Venezuela -- where the vaccine rollout has been slow and hampered by supply shortages.

"In my country, (Covid-19) is getting out of hand and there's not much chance we'll have access to the vaccine soon," Maria Bonilla, who arrived Saturday from Honduras, told AFP.

The 40-year-old accountant flew in with her parents, aged 63 and 73. The three of them stood in line, wearing masks. "We had to make the decision to look for a solution outside the country," Bonilla said.

Blanca Diaz, 50, who arrived Friday from Mexico, came to the same conclusion: "They are just starting to vaccinate older people," she said of her home country.

The rush to find a vaccine has been accompanied by a sharp surge in airfares. Flights from Buenos Aires to Miami, which usually cost around $1,000, have jumped to $2,000 in May.

Bonilla is acutely aware of her privilege to be able to travel with her parents to get vaccinated. "It's unfortunate. It already creates this division that some of us have access to health and others do not," she said.

Miami Beach city commissioner David Richardson, a Democrat, who oversaw the facility, told AFP he has mixed feelings about the vaccine tourists.

"I think we, the United States government, should help as many people as possible," he said.

"My only concern is that it seems that the people who can afford to buy an airfare can come to the United States and get a vaccine now.

"And what about the poor people in South America?" Richardson asked, urging the US government to send vaccines overseas "so that everybody can have access to the vaccine, not just the people who can afford to come here."

On Sunday, the pop-up vaccination booth inoculated 175 people with the Johnson & Johnson shot, the brand favored by tourists because it requires only one dose.

This is the second weekend that the booth has been set up on the beach, and it will be back for the next few weekends.

Richardson said he was authorized Sunday morning to provide vaccines to anyone over age 18.

In theory, Florida vaccinates state residents or people who indicate -- verbally -- that they offer a service in-state. As of 10 days ago, it is no longer necessary to provide documented proof of residence.

This easing of requirements was implemented to encourage undocumented residents to get vaccinated -- but it also has encouraged vaccine tourists.

Since January, wealthy Latin Americans have been creatively circumventing the now-eliminated residency requirement.

They would show bank statements for accounts with a US address, or temporary rental contracts -- even with Airbnb -- could be immediately canceled once they had been vaccinated.

More than nine million people -- out of a total of 21.5 million residents -- have had at least one dose of the vaccine in Florida, according to the US health department.

"At this point, the people that haven't been vaccinated is certainly not because a lack of supply or a lack of availability," Florida Governor Ron DeSantis said last week.