Villager speaks of 'hell on earth' as Turkey battles wildfires 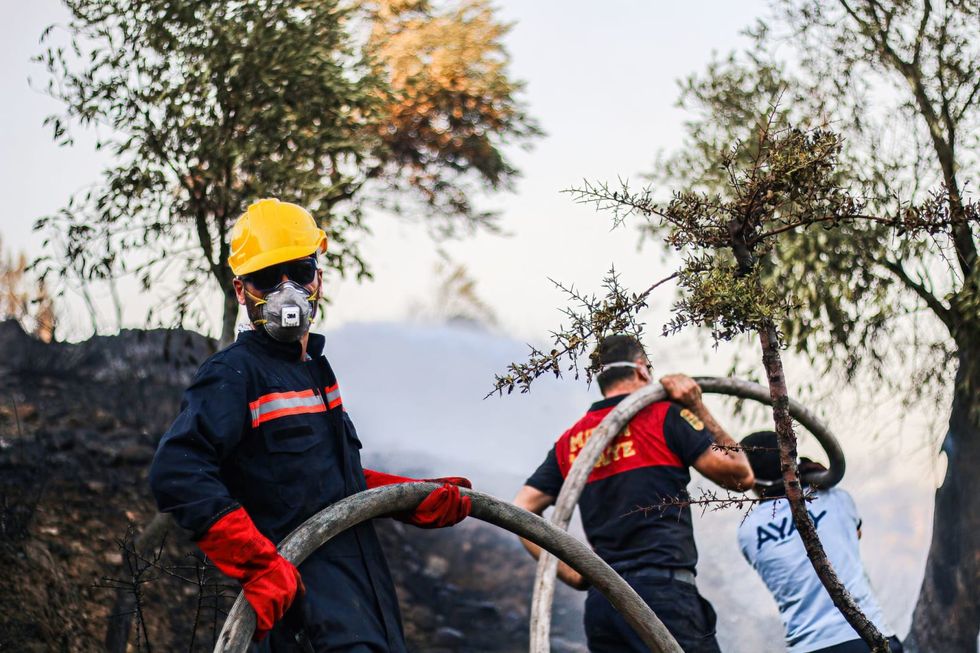 Firefighters work to extinguish burning trees as wildfires have been raging for nearly 10 days near Mugla. Thousands of ground personnel, backed by firefighter planes, drones and helicopters, were striving to tackle massive wildfires across seven cities and provinces in southern TurkeyMugla is one of the regions hardest hit by the fires. Hakan Akgun/SOPA Images via ZUMA Press Wire/dpa

Turkish emergency crews continued to battle the worst fires seen in years for the 10th consecutive day on Friday.

The worst fires are burning along Turkey's southern and western coastline, in the regions of Antalya, Marmaris, Bodrum and Milas.

Later, officials said two of the fires near Antalya had been brought under control. Forestry Minister Bekir Pakdemirli thanked rescue workers for their efforts in a tweet on Friday.

The flames engulfed several neighbourhoods during the night in Milas, but residents had already been evacuated from their homes, the local authorities said.

The Milas fire is now under control, but in other areas, flames threaten to engulf residential areas: A time-lapse video from Thursday showed a wall of fire consume a village in half an hour.

The fires also caused devastating damage in Manavgat in Antalya. "This is hell on earth," Murat Olcay, who lost his house in the village of Kalemler, told dpa.

He said the fire had swept through the village within the space of just half an hour, burning countless homes in no time at all.

He was only just able to escape on foot, he said.

More than 200 forest fires broke out last Wednesday across several provinces, in the worst blazes seen in more than 13 years. Many of the fires are still burning with unprecedented intensity.

At least eight people have died and at least 100,000 hectares of forest and fields have fallen victim to the flames, according to estimates.

In Marmaris alone, an area of more than 16,000 hectares has been burned by the fires, the local authorities said.

Foreign Minister Mevlut Cavusoglu, whose constituency is in Antalya, had hopeful words on Thursday night, saying the wind was due to die down in Antalya on Friday. He said he hoped the fires there could be brought under control.

Of the residents evacuated across the nation, some are now staying in schools and sports stadiums.

The authorities have issued lists of things that people need, ranging from cutlery to plates, pillows and blankets.

The two ministers agreed to help each other in fighting the flames, although they said this would only be possible when each country had managed to control the fires in their own territory.

The two countries have been fighting for decades over sovereign rights in the Aegean Sea and over the Cyprus issue, and the situation had further escalated in recent months.