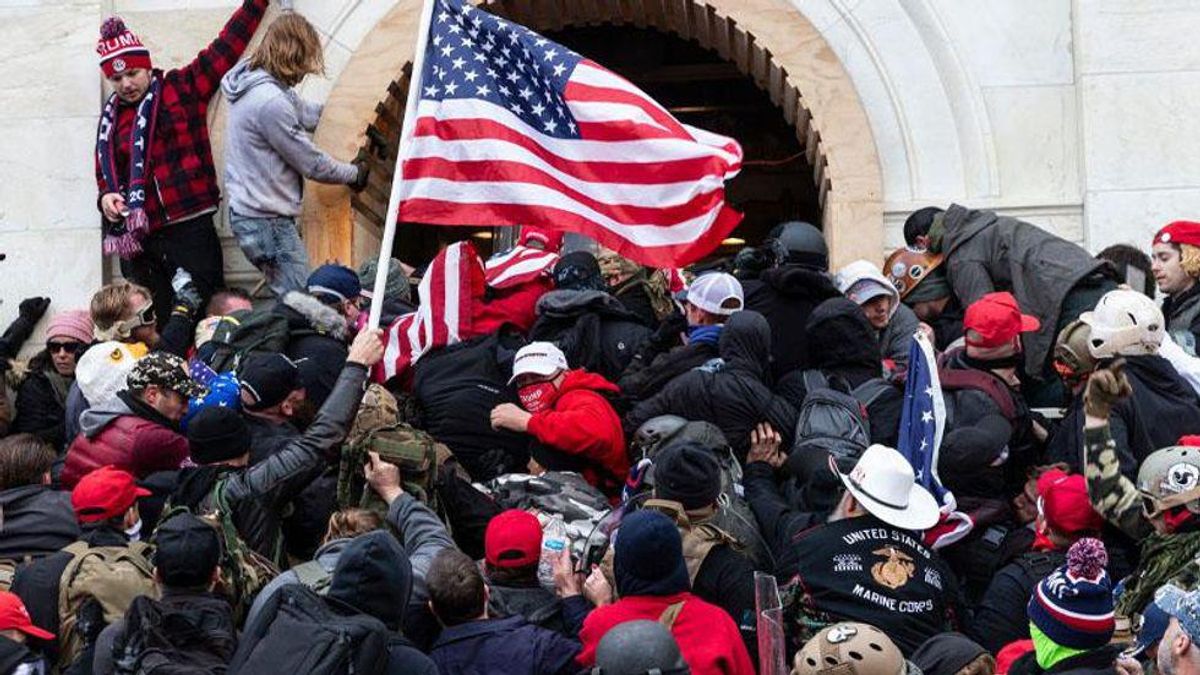 Over the past few weeks, we've heard from some of the police officers who defended the U.S. Capitol from a violent mob on January 6th and their stories have been poignant and quite sad. They clearly feel betrayed by the many elected officials who have publicly dismissed what happened as simply a bunch of rowdy tourists when the officers were the ones left to literally engage in hand-to-hand combat and put their lives on the line to keep those same officials safe that day.

Capitol Police Sgt. Aquilino Gonell told CNN that he was beaten by a man with a flagpole, his hand was sliced open and he was sprayed with so much chemical poison that it soaked through his clothes and burned him for hours. But what bothered him the most was that the rioters called the police traitors and said, "we're going to shoot you. We're going to kill you. You're choosing your paycheck over the country. You're a disgrace!"

I suspect that's not something those officers hear from the tourists coming through the building on a normal day. And it's likely that some of the police officers had been Trump fans, unable to fathom that all those white people dressed in red, white and blue, waving the American and Trump flags would ever treat cops that way.

Before the recent Senate vote on the bipartisan January 6th Commission, the mother and partner of Officer Brian Sicknick who died on that day asked to speak with the GOP senators who were planning not to vote for the bill. She simply wanted to know how it happened. A few met with her, but none of them changed their minds — at the request of Republican Leader Mitch McConnell, R-Ky., Despite an extremely fair bipartisan process that gave Republicans equal input and influence, the Republicans whined that the commission was "politicized" and expressed confidence that almost everything people need to know about that day was already known. Congressional investigations and prosecutions of the rioters, they argued, would take care of the rest. The Republicans filibustered the bill and it went down to defeat.

On Tuesday, the first of the "reports" they all insisted would tell the tale was released. It was a bipartisan investigation undertaken by the Republican and Democratic leaders on the Senate Homeland Security and Rules committees to determine the scope of the security failures on that day. Those policemen who spoke up about the horror of that day must feel even worse than they did before. If this report is any indication, the official history of that day may very well make it appear that the primary responsibility for what happened lies with the police — not the rioters or the people who instigated it.

That is not to say that the failures the report illuminated weren't serious. Salon's Jon Skolnik summarized the most important findings:

[T]he Capitol Police's intelligence division flagged various social media posts that plotted to breach the building. Police Chief Yogananda Pittman told congressional investigators that the unit reportedly brought them to the department's "command staff," but the material never arrived at the desks of higher-ups. This lack of communication persisted throughout the plan's escalation on social media until the riot unfolded on January 6.

The "full scope of known information" was never conveyed to Capitol Police "leadership, rank-and-file officers, or law enforcement partners." The Intelligence Community apparently didn't take it seriously either or, if they did, they didn't pass on their concerns and there was no emergency authority so nobody knew which way to turn when reinforcements were required. The police simply weren't prepared for a violent insurrection even though many of the Trump followers who were planning to swarm the Capitol that day were openly talking about perpetrating one.

It is a sobering report and does add some new detail to the story that we hadn't heard before. But it leaves many more questions than it answers. After all, these insurrectionists didn't just cook this up out of the blue. They felt they'd been given the order to do what they did and said so openly as they stormed the building. None of that is addressed by this investigation — and that's because the Republicans on the committee refused to do it.

According to CNN, the language of the report was the subject of many negotiations in order to keep the timorous Republican senators on board. A committee aide told the network, "did we look at Trump's role in the attack? The answer is no." They couldn't even use the word "insurrection" or mention the threats against Vice President Mike Pence in the body of the report. They were instead forced to leave Trump's incitement against Pence to the appendix.

The report also didn't look at the attempts behind the scenes to get the president to bring the insurrection under control, for obvious reasons: He thought it was terrific. As he told Fox News a couple of months ago:

"Right from the start, it was zero threat. Look, they went in — they shouldn't have done it — some of them went in, and they're hugging and kissing the police and the guards, you know? They had great relationships. A lot of the people were waved in, and then they walked in, and they walked out.

And they certainly didn't investigate what Trump knew and what he did before January 6th because it's potentially even more damning. Francesca Chambers of McClatchy reported just days after the event:

The night before the president directed his supporters to converge on the Capitol, he considered announcing by tweet that he would march down Pennsylvania Avenue with them. But he decided against it out of concern that they would be blocked from approaching the federal building if he provided advance notice of their plans.

At the very least it's clear that Trump didn't want the police to be properly prepared for a huge crowd unexpectedly bearing down on the Capitol. One might even suspect he knew exactly what he was doing.

These are things the American people have a right to know about. If people inside the White House were telling reporters about it, they could certainly be compelled to speak under oath to a congressional committee or even a special counsel. The report issued this week, with its tippy-toeing around the big orange elephant in the room only makes it more obvious how necessary a serious probe really is. The work that's going on in the states by Republicans to further subvert the electoral process along with the ongoing threat of right-wing extremist violence cannot be fully dealt with unless the American people have access to everything that led up to this moment.

The Democrats must keep hammering away at this regardless of the GOP's desperate desire to pretend it never happened. If they don't, there's a very good chance it will happen again.