Where hippos are pets: Pablo Escobar's lasting legacy in Colombia 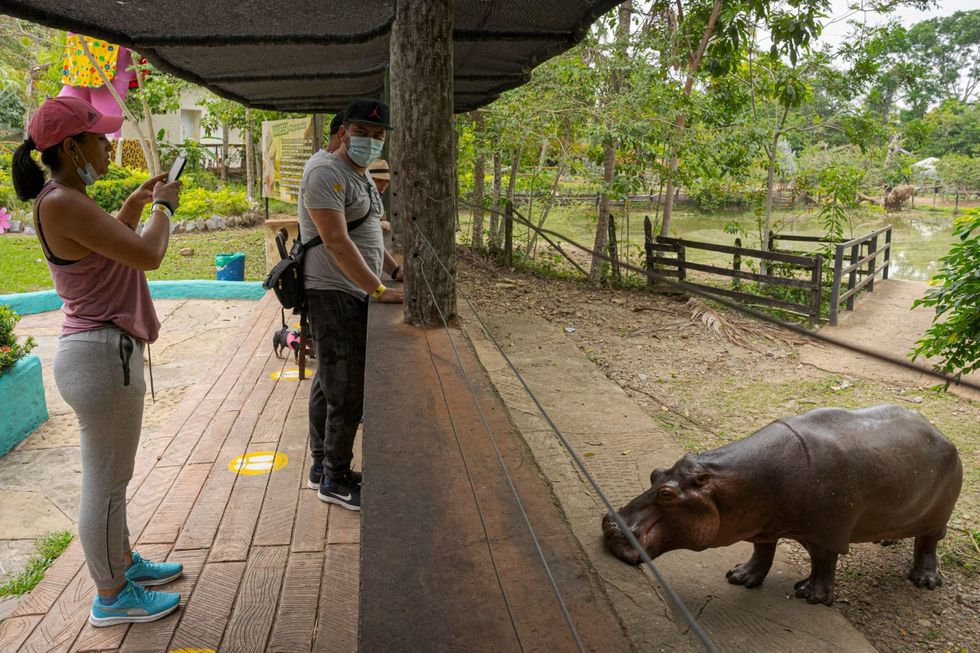 The kangaroos, giraffes and elephants that once lived at the private zoo at Pablo Escobar's estate, Hacienda Napoles, are long gone, just like the Colombian drug lord himself.

The only remaining legacy is a population of hippos. And they are thriving. So much so that it's becoming a problem for the region.

"We have one goal: to stop the uncontrollable growth of the hippos," biologist David Echeverri of the regional environmental agency CORNARE tells dpa. The animals can damage the ecosystem, displace native species and alter water quality. The latest effort is trying to obtain contraceptives for Escobar's fertile "cocaine hippos."

The current population all stems from four African hippos brought to Hacienda Napoles, 170 kilometres from Medellin, as a show of wealth and power by Escobar, who dominated the illegal drug trade with the United States in the 1970s and '80s with his Medellin cartel.

These days, the 3,000-hectare estate is an amusement park, and about 80 hippos in total frolic about the nearby Puerto Triunfo community.

"The animals are a blessing, they bring many tourists," says Isabel Romero from Estacion Cocorna village. She and her sons offer boat tours for 60 dollars to the spots where the hippos like to hang out.

After Escobar was killed by security forces in 1993, the hippos were left to fend for themselves. Luckily for them, the tropical climate, without any natural enemies, was a perfect spot for them to live.

"About 10 years ago, we started to realize that we had a huge hippo population," according to Echeverri. "We began to study the population to see if there was an immediate solution," he explains.

But by then, it was too late. Just 10 hippos have been castrated, a costly and difficult process, and four have been taken to zoos in Colombia. The rest of the hippos just continued reproducing unabated.

While about 40 hippos can move freely back and forth from the lake near Hacienda Napoles, the female hippo Vanessa is the only one who has her own pond at the luxury estate. Tourists pet and feed Vanessa, who was cast out from the herd, despite the dangers hippos can pose.

Hippos are, in fact, more dangerous than crocodiles and lions put together. Their weight is enough to capsize boats, a fact that keeps many fishermen on the local river, the Rio Magdalena, on the lookout.

However, residents in the area have mostly become used to the hippos' presence in their rivers and in the streets. In the village of Doradal, the main advice is "If you don't hurt them, they won't hurt you," according to Ana Rita Duque Quiceno.

"We keep a safe distance and take pictures. Nothing has ever happened that way," she says.

Even barking dogs don't bother the hippos - they themselves are now pets. That's why researchers' recent suggestion that the hippos be killed didn't sit well with people in the area and animal lovers.

The pot had been stirred already in 2009 when Pepe, a stray hippo, was shot on the orders of the Environment Ministry. Soldiers posed with the dead hippo, sparking outrage that caused the hippo to become nationally famous and leading to a court ban on hunting them in 2012.

Besides a fondness for the animals, they're also a source of revenue.

Doradal is a veritable Hippo Disneyland nowadays, complete with a pnk hippo statue and hippo-shaped drink stand. Kids like Miller Steven Diaz, 9, are being trained to become tour guides in the future.

The hippos, just like Escobar, have a mixed legacy. The drug kingpin was seen by some as evil personified, while others view him as a kind of South American Robin Hood.

Similarly, the hippos are a part of Escobar's legacy that some people want to get rid of, while others don't want to part with so easily.

The researchers are aware that their recommendation to kill the hippos is difficult to implement when that factor is taken into consideration, besides the general popularity of the animals.

Their last hope, then, is to turn to science and chemical castration.