Netflix’s enormously popular new show, Ancient Apocalypse, is an all out attack on archaeologists. As an archaeologist committed to public engagement who strongly believes in the relevance of studying ancient people, I feel a full-throated defense is necessary.

Author Graham Hancock is back, defending his well-trodden theory about an advanced global ice age civilisation, which he connects in Ancient Apocalypse to the legend of Atlantis. His argument, as laid out in this show and in several books, is that this advanced civilization was destroyed in a cataclysmic flood.

The survivors of this advanced civilization, according to Hancock, introduced agriculture, architecture, astronomy, arts, maths and the knowledge of “civilization” to “simple” hunter gatherers. The reason little evidence exists, he says, is because it is under the sea or was destroyed by the cataclysm.

“Perhaps,” Hancock posits in the first episode, “the extremely defensive, arrogant, and patronizing attitude of mainstream academia is stopping us from considering that possibility”.

In the opening dialogue of Ancient Apocalypse, Hancock rejects being identified as an archaeologist or scientist. Instead, he calls himself a journalist who is “investigating human prehistory”. A canny choice, as the label “journalist” helps Hancock rebut being characterized as a “pseudo archaeologist” or “pseudo scientist”, which, as he puts it himself in episode four, would be like calling a dolphin a “pseudo fish”.

From my perspective as an archaeologist, the show is surprisingly (or perhaps unsurprisingly) lacking in evidence to support Hancock’s theory of an advanced, global ice age civilization. The only site Hancock visits that actually dates to near the end of the ice age is Göbekli Tepe in modern Turkey.

Instead, Hancock visits several North American mound sites, pyramids in Mexico, and sites stretching from Malta to Indonesia, which Hancock is convinced all help prove his theory. However, all of these sites have been published on in detail by archaeologists, and a plethora of evidence indicates they date thousands of years after the ice age. 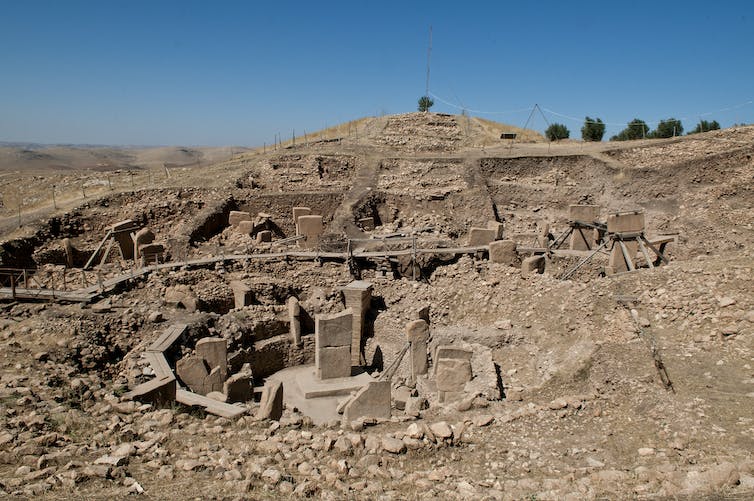 The Neolithic archaeological site Göbekli-Tepe in Turkey is one of the locations Hancock visits in Ancient Apocalypse.Teomancimit, CC BY-SA

Hancock argues that viewers should “not rely on the so-called experts”, implying they should rely on his narrative instead. His attacks against “mainstream archaeologists”, the “so-called experts” who “practice censorship” are strident and frequent. After all, as he puts in in episode six, “archaeologists have been wrong before and they could be wrong again”.

Steph Halmhofer, a PhD candidate at the University of Alberta who studies the use of pseudo archaeology and erasure of indigenous heritage by far-right groups, suggests that these attacks on archaeologists function to increase his sense of authority with viewers. As Halmhofer explains:

It’s about conspiracism and the positioning of Hancock as the victim of a conspiracy. The repeated disparaging remarks about archaeologists and other academics in every episode of Ancient Apocalypse is needed to remind the audience that the alternative past being proposed is true, regardless of the lack of conclusive evidence for it. And the vagueness of who this supposed advanced civilisation was, combined with the credence given to it by being in a Netflix-produced series, is going to make Ancient Apocalypse an easily mouldable source for anyone looking to fill in a fantasied mythical past.

In the last decade we have seen how conspiracy theories and distrust in experts impacts the world around us. And research has shown how pseudo archaeology – especially when couched in anti-intellectual rhetoric – can overlap with more dangerous conspiracy thinking.

Of course, archaeologists frequently admit when we have been wrong. Any academic teaching “Archaeology 101” or applying to fund a new study points out how new evidence updates our picture of the past. Despite the fact that every scientific field updates its thinking with new evidence, according to Hancock, any rewrites to history mean that archaeologists, his “so-called experts,” should not be relied upon.

Despite repeated claims made by Hancock, no archaeologists today see stone age hunter-gatherers or early farmers as “simple” or “primitive”. We see them as complex people. Priming viewers to distrust archaeologists, also allows Hancock to use circular logic to re-date these sites.

The murky origins of Hancock’s theories

Hancock claims in his book Magicians of the Gods that as the “implications” of his theories “have not yet been taken into account at all by historians and archaeologists, we are obliged to contemplate the possibility that everything we have been taught about the origins of civilisation could be wrong”. However, archaeologists have repeatedly addressed his theories in academic publications, on TV and in mainstream media.

Most glaring to scholars investigating the history of Hancock’s pseudo archaeology is that while claiming to “overthrow the paradigm of history,” he doesn’t acknowledge that his overarching theory is not new.

Scholars and journalists have pointed out that Hancock’s ideas recycle the long since discredited conclusions drawn by American congressman Ignatius Donnelly in his book Atlantis: The Antediluvian World, published in 1882. 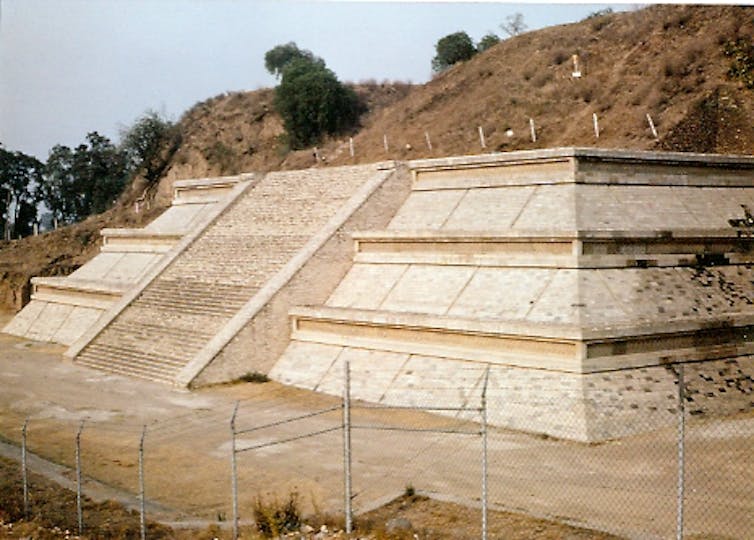 Donnelly also believed in an advanced civilisation – Atlantis – that was wiped out by a flood over 10,000 years ago. He claimed that the survivors taught Indigenous people the secrets of farming and monumental architecture.

Like many forms of pseudo archaeology, these claims act to reinforce white supremacist ideas, stripping Indigenous people of their rich heritage and instead giving credit to aliens or white people.

Hancock even cites Donnelly directly in his 1995 book Fingerprints of the Gods, claiming: “The road system and the sophisticated architecture had been ‘ancient in the time of the Incas,’ but that both ‘were the work of white, auburn-haired men’.” While skin colour is not brought up in Ancient Apocalypse, the repetition of the story of a “bearded” Quetzalcoatl (an ancient Mexican deity) parrots both Donnelly’s and Hancock’s own summary of a white and bearded Quetzalcoatl teaching native people knowledge from this “lost civilisation”.

Hancock’s mirroring of Donnelly’s race-focused “science” is seen more explicitly in his essay, Mysterious Strangers: New Findings About the First Americans. Like Donnelly, Hancock finds depictions of “caucasoids” and “negroids” in Indigenous American art and (often mistranslated) mythology, even drawing attention to some of the exact same sculptures as Donnelly. 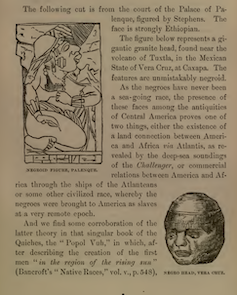 A page from Donnelly’s now debunked 1882 book, Atlantis: The Antediluvian World.via the author

This sort of “race science” is outdated and long since debunked, especially given the strong links between Atlantis and Aryans proposed by several Nazi “archaeologists”.

These are the reasons why archaeologists will continue to respond to Hancock. It isn’t that we “hate him” as he claims, it is simply that we strongly believe he is wrong. His flawed thinking implies that Indigenous people do not deserve credit for their cultural heritage.

Is America's infatuation with billionaires finally coming to an end?

Amanda Marcotte, Salon
It has long been evident that Elon Musk is a moron, at least to those willing to see it. Well before the Tesla CEO overpaid for Twitter in the throes of a tantrum, there was a chorus of mostly-ignored people pointing out, repeatedly, that Musk's mental maturity appeared to have stagnated around the sixth grade. There was the time he rolled out a "ingenious" idea for tunnel-based transportation, only to have people point out that the subway has been around for over a century. Or the time he tried to push a useless and overly complicated plan to rescue a group of Thai children trapped in a cave. Or the time shortly after that when, still angry at being dismissed, he falsely accused the man who actually did save the children of being a pedophile. Or the time he acted like such an idiot on Joe Rogan's podcast that Tesla stock took a dive. Or the time he named his actual child X Æ A-12.

There are infinitely more examples. (His childish feud with rapper Azealia Banks is a personal favorite.) Yet somehow, no matter how often Musk has shown his ass in public, the damage to his reputation was fleeting. The business and tech press would be startled at his dumb behavior, but within 48 to 72 hours, it was all forgotten and Musk went back to being covered as if he were a genius, if perhaps an eccentric one.

Such is the power of the American mythology of the billionaire. The infatuation with our richest capitalists is related to, but in many ways goes even beyond, the illusion that the U.S. is a meritocracy. The notion that to be very rich must also mean you're brilliant permeates our society, justifying both ridiculously low taxes on the wealthiest Americans and the undue influence they exert over our political system. It's a social fiction that dates back to the Gilded Age and has covered up the intellectual deficits of many famous Americans. (Henry Ford comes to mind.) But it's gotten a lot more juice in the past few decades, as the new class of tech billionaires, starting with Bill Gates of Microsoft and Steve Jobs of Apple, forged the image of the singular mastermind who, with little education and limited resources, remakes the world through the sheer power of their intelligence.