Just why would we get the idea that he's McSame?

This is brilliant. The Jed Report has a mashup of the obliteration of John McCain...by John McCain on whether he's hand-in-glove with Dear Leader.

And here is today's WTF moment by McCain, via The Carpetbagger Report:

“I will look you in the eye and promise you that I will get Osama bin Laden and bring him to justice,” McCain said in response to a direct question from one of the 2,000 people in attendance at the college’s Pemberton campus gym.

McCain said the key to ending the long search for bin Laden was to increase the number of human spies abroad.

“We need better human intelligence. We need people who can swim in the water,” McCain said.

Below the fold -- a big McCain fundraiser's past remarks about rape roil the campaign. *** 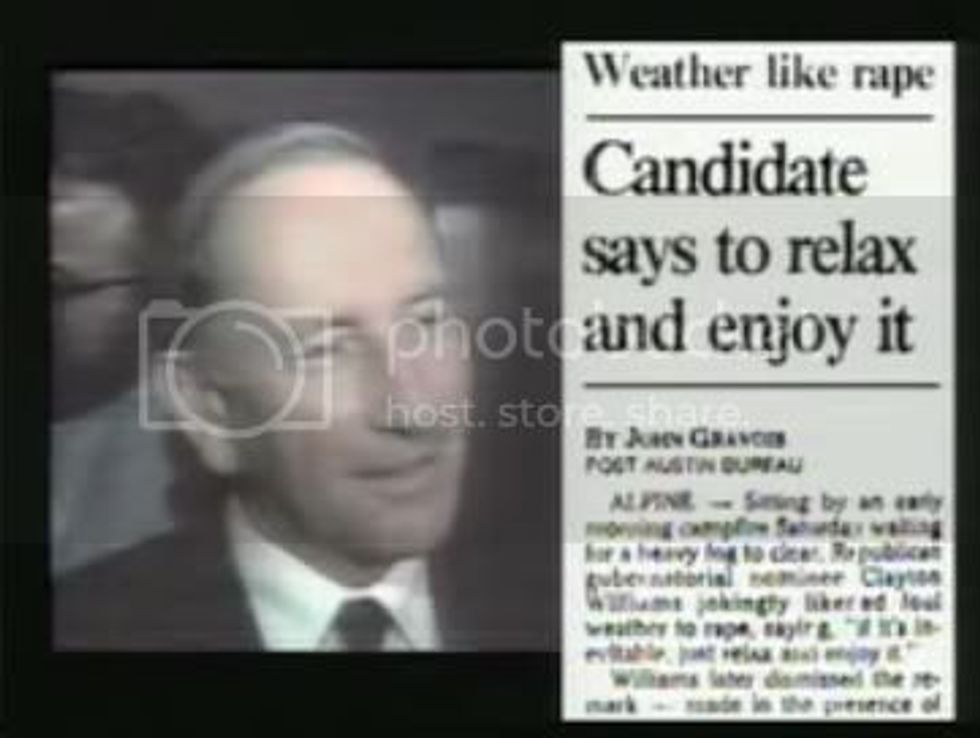 Meanwhile, the latest with-friends-like-these moment comes from what ABC calls a "verbal blunder" by one of McCain's fundraising buds.

Sen. John McCain on Friday abruptly cancelled a Monday fundraiser that had been scheduled at the home of a Texas oilman, after ABC News contacted the campaign inquiring about a verbal blunder the Texan made during an unsuccessful 1990 campaign for governor.

Clayton Williams stirred controversy during his 1990 campaign for governor of Texas with a botched attempt at humor in which he compared rape to weather. Within earshot of a reporter, Williams said: “As long as it's inevitable, you might as well lie back and enjoy it.”

His Democratic opponent at the time, the late Ann Richards -- who, coincidentally, would lose the governor’s mansion to George W. Bush in 1994 -- highlighted the comments in a TV ad during that 1990 campaign.

How on earth is that statement a "blunder?" That wasn't a slip of the tongue or a misstatement; Williams thought he was telling a good old boy joke. Well, considering the Arizona called his wife a c*nt in public, he probably would have laughed at that "joke" himself.

By the way, McCain's campaign said it wouldn't give back any of the $300K raised by Williams. The DNC's response:

"Mr. Williams' comments are not only outrageous and disgusting, they degrade our values as Americans. John McCain should make it clear that he understands just how offensive these comments are by not only canceling a fund-raising event but also returning the money Wlliams raised for his campaign. Senator McCain should know that you cannot expect the American people to trust you if you say one thing when you stand on the stump and turn a blind eye to this kind of language when you think no one will notice."