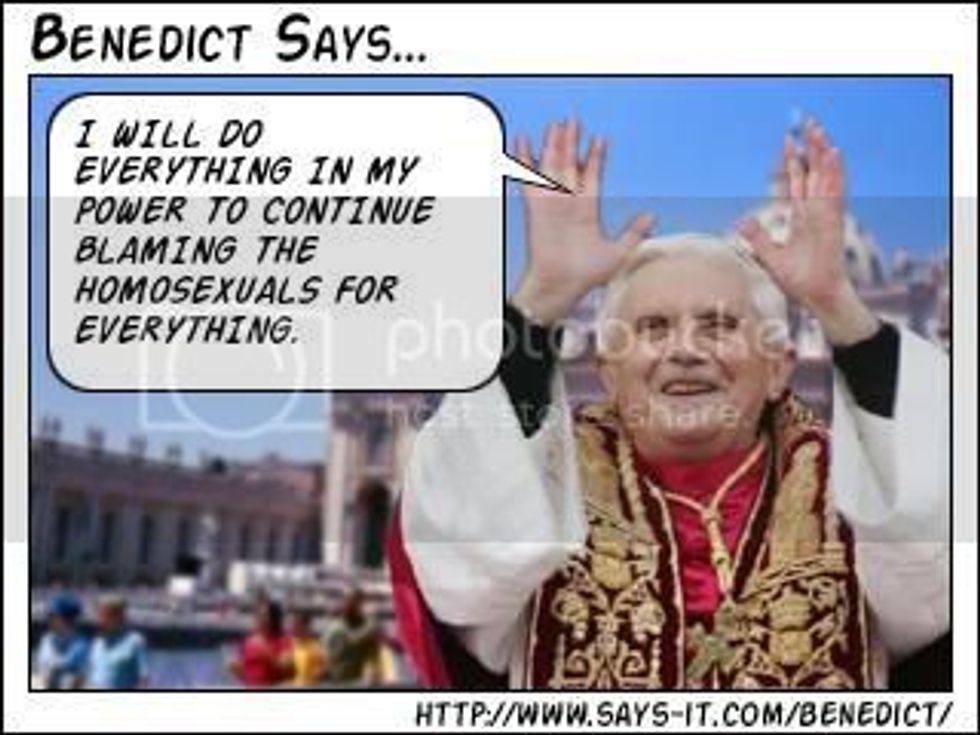 This level of hypocrisy by Papa Ratzi, given the millions already shelled out because of the criminal priests the church allowed to run amok abusing children is mind boggling. How can he say these things with a straight face at this point? It only opens the wounds all over again. I can't imagine what those who suffered abuse in the massive scandal must think about this.

"Let us think of those street children who do not have the blessing of a family home," he said during the solemn mass at St. Peter's Basilica.

"Let us think of those children who are victims of the industry of pornography and every other appalling form of abuse, and thus are traumatised to the depths of their soul."

Benedict said Catholics had to "do everything in our power to put an end to the suffering of these children."

In the past year the Pope has repeatedly addressed the issue of sexual abuse of minors by Catholic clergy, but did not raise it in his Christmas homily.

Everything in his power? Can he not afford a plane ticket to send Cardinal Law back stateside to face the music? Or what about alllowing those children without a home to be adopted by loving, qualified same-sex couples? Just asking.

What I don't understand, PR wise -- aince the Catholic Church surely has a boatload of PR shills installed (at least as many as Rick Warren) -- is why no one even bothers to steer Papa Ratzi from treading into such hypocritical territory from a image perspective, given the PR tatters that the church is in under his watch.

At home in Scranton, facing a fight in DC, Biden pitches his sprawling domestic agenda

A retired Southeastern Pennsylvania Transportation Authority railcar sitting to his far right offered an example of how neglected the country's infrastructure has been. Its letters were barely visible. The door's paint was scuffed and faded.

Next to it, however, stood a refurbished trolley car, decked out in patriotic pennants and “Build Back Better" signs.

J. Patrick Coolican, Minnesota Reformer
The U.S. House Ethics Committee will review allegations that U.S. Rep. Jim Hagedorn used his office budget to pay a business owned by his staff and that his campaign accepted free office space from a political donor, a violation of federal election law.

Rudi Keller, Missouri Independent
A cybersecurity expert targeted for investigation by Missouri Gov. Mike Parson is demanding a public apology and payment for his costs for legal help and damage to his reputation.

Shaji Khan, an associate professor at University of Missouri-St. Louis and director of its Cybersecurity Institute, made the demand in a letter sent Thursday by attorney Elad Gross to Parson's office, several state and local agencies and a political committee that supports Parson.

The letter demands that the “Missouri Office of Administration, the Missouri Department of Elementary and Secondary Education, Gov. Mike Parson, Commissioner Margie Vandeven, and Uniting Missouri PAC release separate, detailed and public statements apologizing to Professor Khan, to be shared on their respective websites, with Missouri and national press outlets, on social media sites, and to anyone the parties communicated their false accusations."