Training day with the doggies 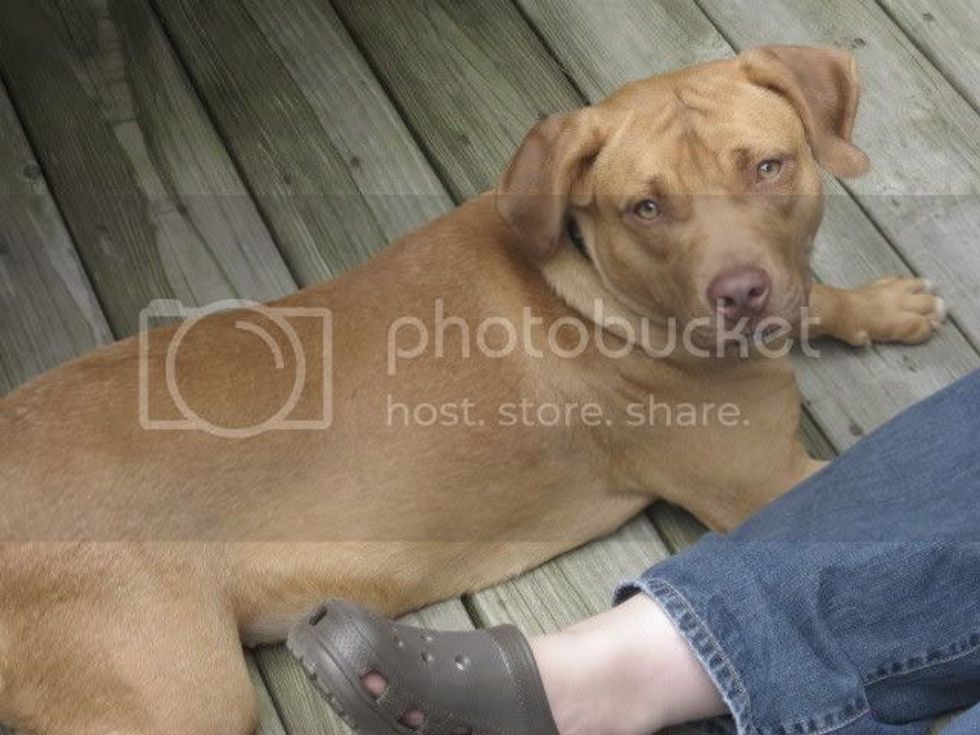 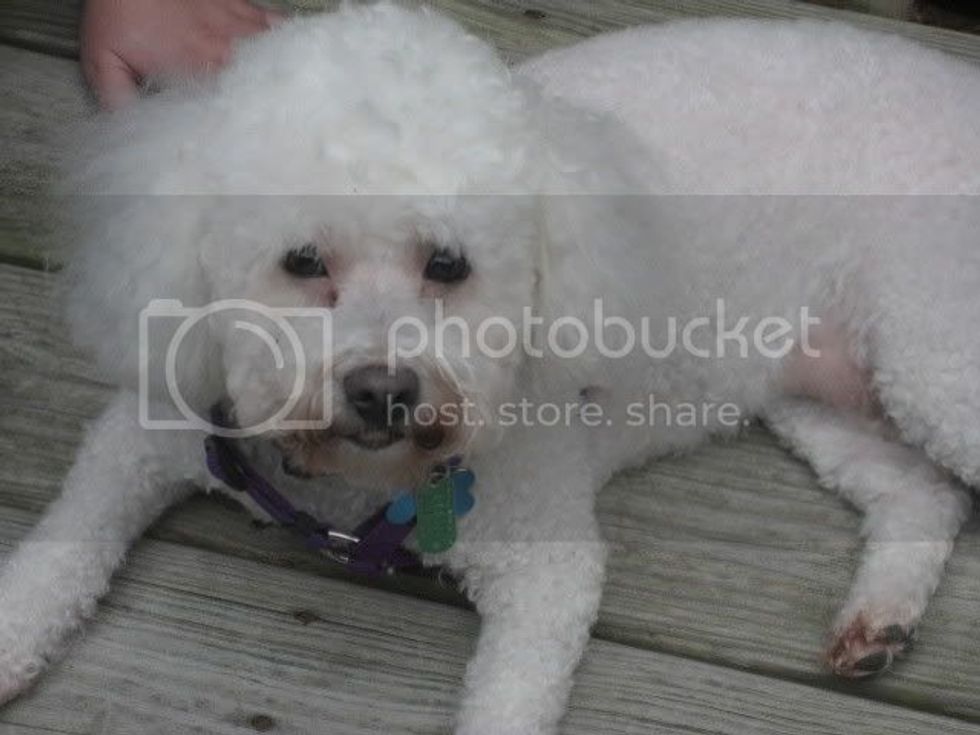 Casey (L) and Chloe (R) are going to their first obedience class today. Chloe, the Bichon Frise, is 7 and has never had formal training. Casey, our new addition to the fold, we adopted from the SPCA in Wake County back in October. She's a American Pit Bull Terrier (APBT, we think a mix, but there is such a wide variety to the breed it's hard to say), and is just turning a year old.

Casey is mild-mannered and sweet; at 40 lbs she acts like a silly lapdog most of the time. She already knows sit, down, and "leave it" reliably when in the house or backyard. We're working on stay and come. But we're taking both of them to formal training mostly for continued socialization and if Casey does well, Canine Good Citizenship training will come later on. 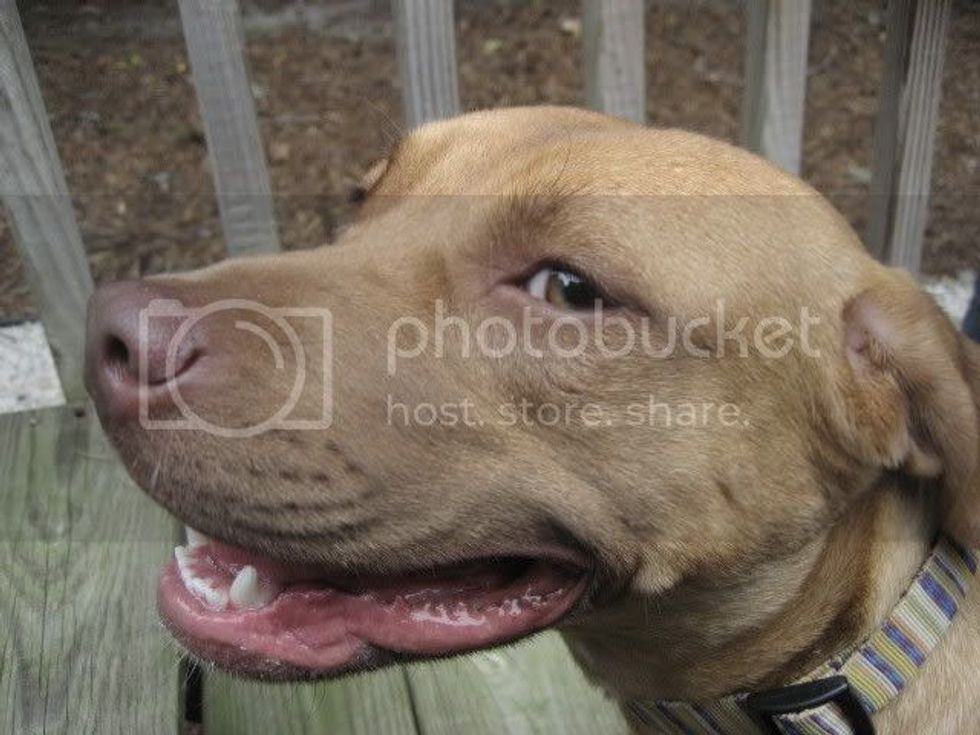 At the shelter she was listed as hound and American Staffordshire Terrier, but quite frankly, she looks more like an APBT once I did some reading up on the matter. I don't blame the SPCA for labeling her that way; obviously the chances of getting adopted go way down for any APBT, no matter their history. So many are given up for all sorts of reasons. In many county or state shelters, APBTs come in and are held as evidence in criminal cases of gang activity and dog fighting. Those poor canines have little or no chance of ever being rehabilitated and rehomed. 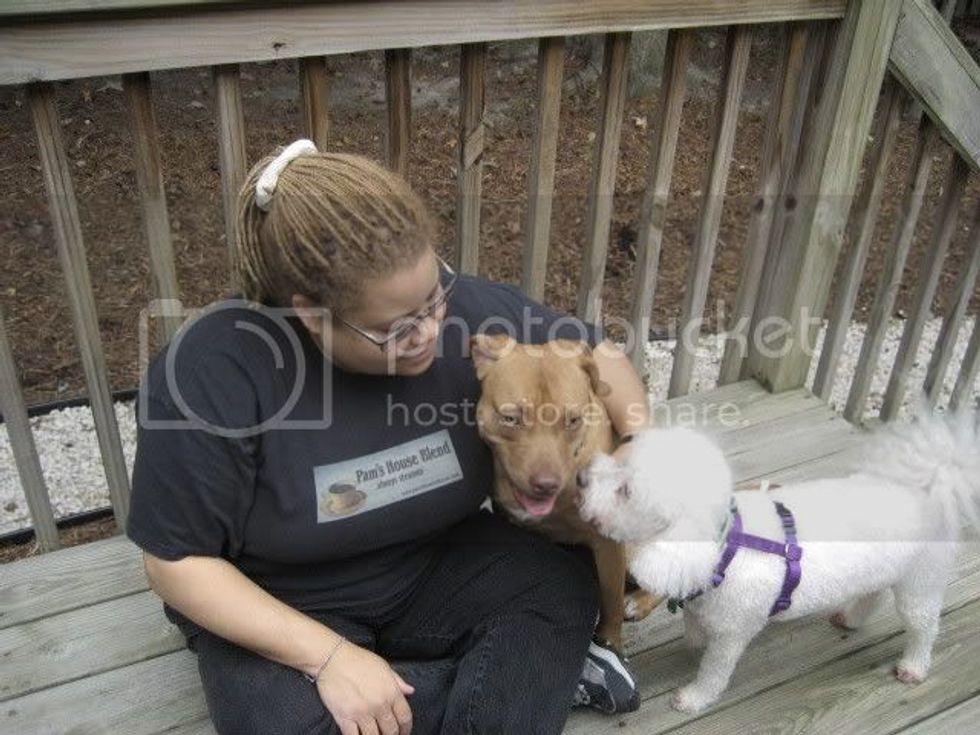 The fact is that the APBT have such a bad rap -- violent, aggressive, man-eaters, dog killers -- that it requires extra responsibility on an owner's part to ensure your APBT is better trained than dogs that are actually more likely to bite or attack. Did you know that the APBT scores higher on the American Temperament Test than many popular breeds considered "friendly?" For instance, Bichons score a 79.3%, whereas APBTs rate a 84.3%. And that 84.3% beats Beagles (80.3%), Cocker Spaniels (81.7%), Shelties (67.4%) and Rhodesian Ridgebacks. (80.8%). The latter I have years of experience with as I've had three in the past, all neutered males that were rescues, and they were the gentlest giants I've lived with.

BTW, it goes without saying that the Labrador is an all-around superstar dog, scoring 91.8%. My late Lab mix Bailey was all Lab in temperament, soft mouth and all.

So that's why we're taking Casey to obedience class -- she needs to be a good ambassador for this much-maligned breed and the bar for her in our society is unfortunately so much higher than for the average dog. 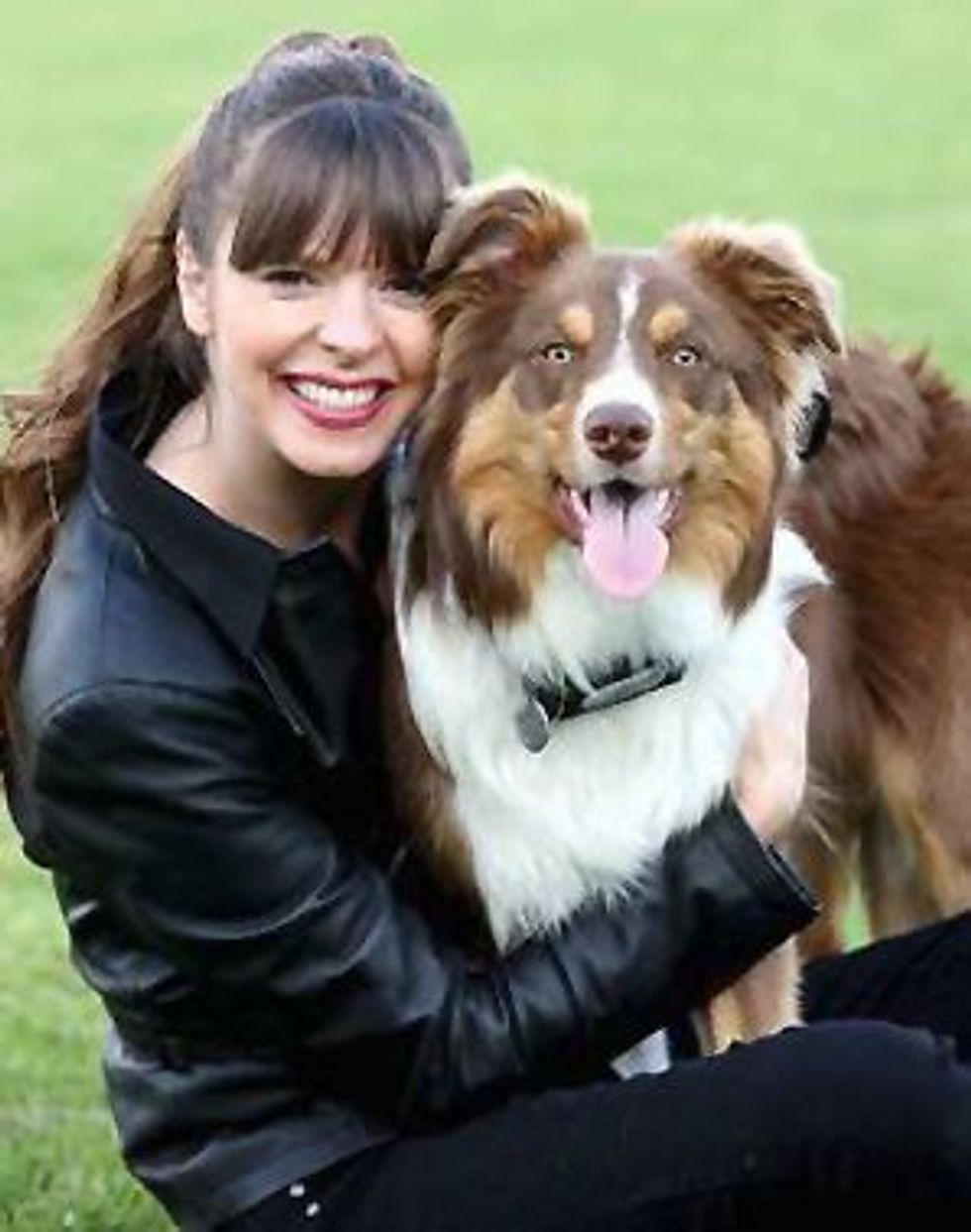 I've taken to watching the incredible Victoria Stilwell the Brit dog trainer who is now working stateside on Animal Planet's "It's Me or the Dog!" This woman knows how to correct the most egregious dog behavior (caused by clueless, often irresponsible owners) through positive reinforcement. It's a marvel to watch her at work, and I've been able to use some of her techniques at home successfully -- in particular the "leave it" command, which worked brilliantly with Casey after 4 tries. My next one to work on is the "off" command, to discourage the enthusiastic jumping both Casey and Chloe do when greeting people at the door. (It's odd that all the larger breeds I've owned -- Ridgebacks, Labs -- never had this jumping problem.) If you watch It's Me or the Dog, it's one of the most common behaviors Stilwell is asked to correct, but it's also one that often requires a lot of repetitions and absolute consistency by the owner to get down solid because guests are often part of the problem by inadvertently encouraging overenthusiastic greetings if the dog is small and can't knock them down.

I noticed that I'm not the only Victoria Stillwell fan -- surf over to Shakesville and see the praises showered on her by Melissa.

APBTs, have a history of being bred to fight dogs and chase prey, but never to be aggressive toward humans; that puts them in a different class than, say Rottweilers or Dobermans, which are breeds that have been bred to be able to attack humans if trained as guard dogs of property protection. APBTs are thus poor guard dogs by comparison, but they look deadly (particularly if the ears are cropped, argh), so that's usually enough of a deterrent, given the awful reputation of the breed.

All of these breeds are not good for first-time dog owners or those unwilling to put in the time to properly socialize them. Unfortunately, we see mismatches all the time - look at the overflowing shelters of abandoned, abused and discarded dogs. And also that's why breed-specific legislation has emerged -- the dogs get blamed, based on looks alone, not the behavior of the irresponsible owner.

If you are queasy about cruelty to animals, pass on this series of photos set to music. The section on what people do to American Pit Bull Terriers is short, but it's there, so this is your fair warning. Most of the video shows how responsible pet ownership makes these wonderful family dogs.

A flashback to our silly goose Casey's first day coming home - she learned how to climb the stairs...

And her first trip to the vet -- notice how good she is with the vet and tech; the SPCA did a wonderful job of socializing her. Hardly a savage attack beast.