Yes on 8 files motion to invalidate all same-sex marriages 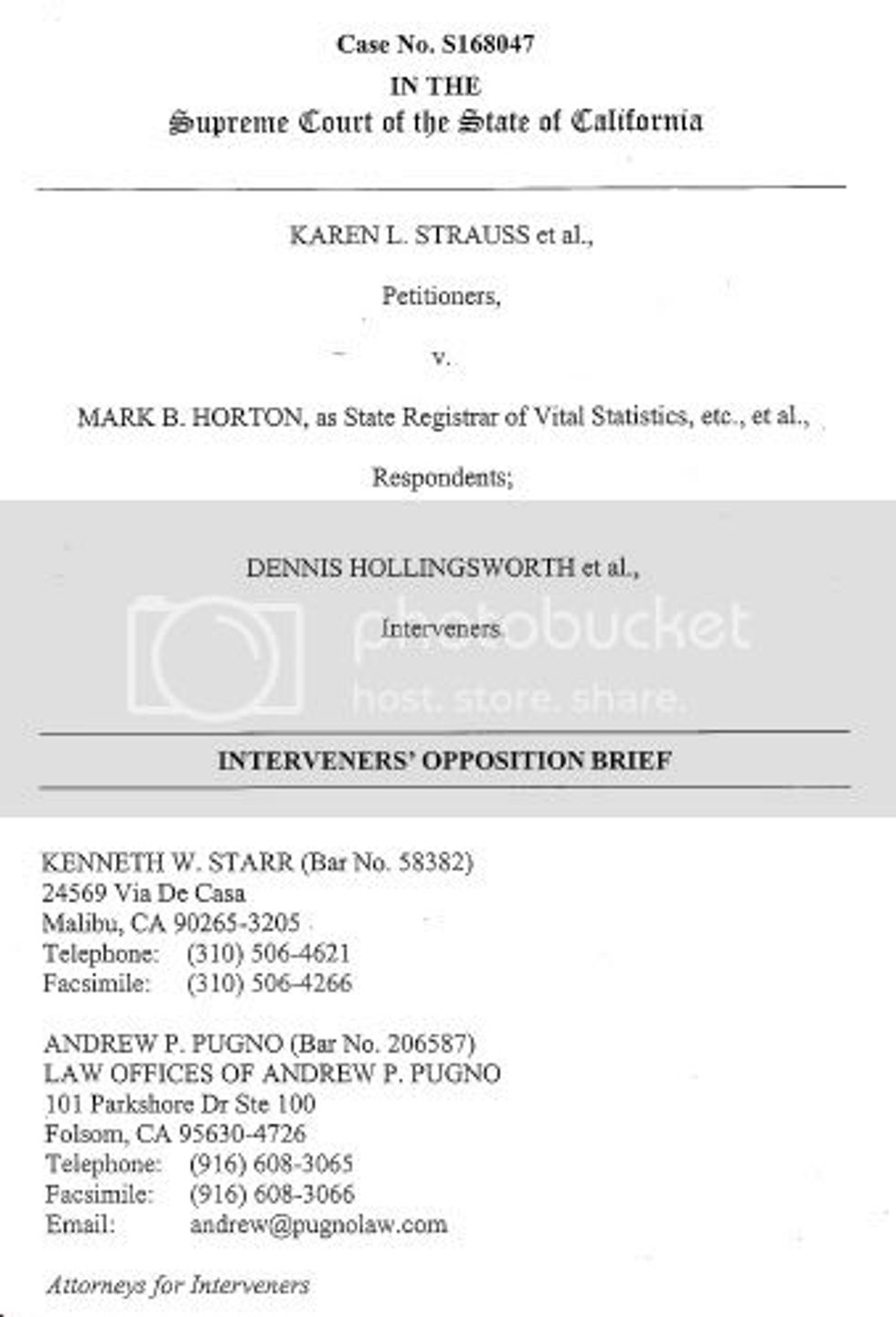 The final nail in the coffin to the dignity and civil rights of the 18,000 same-sex couples who married in California. The proponents of Prop. 8 have filed a motion (Strauss v. Horton, S168047) asking the Supreme Court to nullify all existing same-sex marriages. It makes you sick. BTW, Ken Starr, of the salacious, blue dress-sniffing Starr Report, will argue before the court on behalf of the haters. When will we get to vote on his marriage?

The Yes on 8 campaign filed a brief arguing that because the new law holds that only marriages between a man and a woman are recognized or valid in California, the state can no longer recognize the existing same-sex unions. The document reveals for the first time that opponents of same-sex marriage will fight in court to undo those unions that already exist.

"Proposition 8's brevity is matched by its clarity. There are no conditional clauses, exceptions, exemptions or exclusions," reads the brief co-written by Kenneth Starr, dean of Pepperdine University's law school and the former independent counsel who investigated President Bill Clinton.

The campaign submitted the document in response to three lawsuits seeking to invalidate Proposition 8, the constitutional amendment adopted last month that overruled the court's decision in May that had legalized gay marriage in the nation's most populous state.

...The Supreme Court could hear arguments in the litigation as soon as March. The measure's backers announced Friday that Starr, a former federal judge and U.S. solicitor general, had signed on as their lead counsel and would argue the cases.

After studying the matter, Brown concluded that "Proposition 8 must be invalidated because the amendment process cannot be used to extinguish fundamental constitutional rights without compelling justification."

Backers of Proposition 8 expressed anger at Brown's decision not to honor the will of voters, who approved the measure in November.

"It's outrageous,"said Frank Schubert, campaign manager for Proposition 8. "it is unconstitutional to deny a fundamental right, said Equality California Executive Director Geoff Kors. "We are very pleased that upon review of the law, he has moved from his previous statements that he would defend Prop 8. As the state's highest attorney, Jerry Brown has done his job today to defend the Constitution and protect the rights of minority groups, including the more than 18,000 same-sex couples who married in California."

"Attorney General Brown's position that Proposition 8 should be invalidated demonstrates that he is a leader of courage and conviction," to defend the Constitution and protect the rights of minority groups, including the more than 18,000 same-sex couples who married in California

A reaction from one of the commenters at my pad in reaction to this news that their marriage will be one of the ones dissolved is below the fold. From Blend reader Vanhattan:

This has been a war brewing for decades. Personally, I am elated that the scorched earth policy against The Gays, their love, liberty and equal protection under the law, by the christianist fundamentalists' has finally been irrevocably documented in the light of day by these latest court briefs.

The intent of the christianists has always been to deny the humanity and dignity of The Gays (I define The Gays as all GLBTQ). For years, all we asked for were crumbs. In doing so, a sizeable majority of us realized that the christainists did not intend for us to have ANY rights including basic human dignity and respect that all humans deserve. So we found our own dignity and started fighting for all the rights that we are denied. The Gays started going after equal civil marriage rights because it encompasses so many rights and privileges and is one of the core fundamental rights of any person and couple.

So here we are.

Now the christianists, slowly and painfully, have to reveal their true intent and motives in the light. The body politic does not yet fully understand that christianists are motivated by pure unadulterated hate, fear and bigotry and that the label "hater and bigot" are perfectly legitimate labels they will wear around their necks. Well, this is going to change for the truth is being revealed.

Many folks do not understand the grave danger that denying one minority group equal civil rights actually carries despite numerous examples of it in global history. Until last summer in California, the christianists could argue that the gays never had the right to marry and never should. The argument has fundamentally shifted in a huge way. Not they are forced to take away our new found marriage rights. This is more than ugly, but a very dangerous precedent and I believe that many previously unsympathetic people to same sex marriage will see this clearly.

I lost most of my "biological family" years ago to christianist fundamentalism. I maintained a few strained relationships for another 20 years, and these remnants crumbled at last over my marriage. Actually, I am glad. It has finally set me totally free of the hate I subjected myself and my "real" family to.

Never again will I accept crumbs. Not from my "biological family", not from our leaders and not from our constitutions.

I will fight to the death for my equal rights under the law. I am sure that many here have come to the same conclusion and there is no going back.

We will ultimately win the good fight. Please prepare yourselves for an even tougher and bitter battle. None of this is going to be pretty and my guess is that It will get much uglier before it gets better.