Can we ever reach the bottom of the sickness and hypocrisy with this man? Here's yet another reason that the influence of Pope Benedict is meaningful -- it extends beyond the spiritual bigotry -- it extends into political bigotry, ignorance and gross insensitivity as well. Readers often ask why anyone should pay attention to the acts of the Catholic Church -- this is why the actions of the Pope (and the criminal acts of his boyz) cannot be ignored or left unchallenged. Via Jim Burroway of Box Turtle Bulletin: 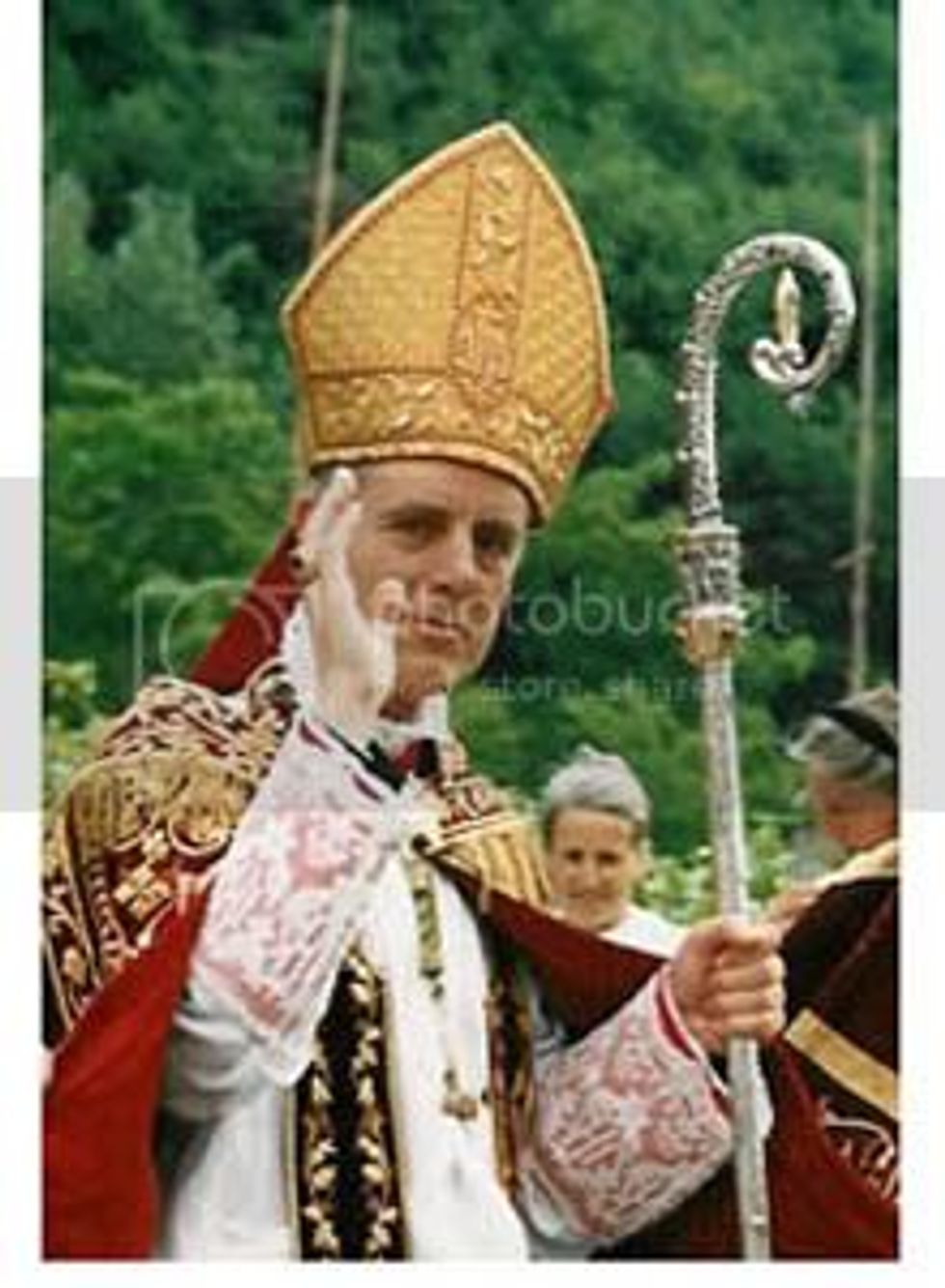 With Pope Benedict XVI saying such outrageous things as describing same-sex marriage as an “obstacle on the road to peace,” or opposing the decriminalization of homosexuality worldwide — including in countries that carry the death penalty even though the Vatican is itself opposed to the death penalty — it’s hard to imagine him surprising us much. And yet, he manages not merely to surprise, but astonish:

The Pope has lifted the excommunication from the Roman Catholic Church of four bishops appointed by a breakaway archbishop more than 20 years ago. One of Archbishop Marcel Lefebvre’s appointees, Briton Richard Williamson, outraged Jews by saying the Nazi gas chambers did not exist.

Is there any gray area? perhaps Williamson's remarks could have been misinterpreted and thus been in doubt by Papa Ratzi as he mulled his decision? Uh, no.

...I believe there were no gas chambers. Yes. As far as I have studied the evidence. I’m not going by emotion. I’m going by as far as I’ve understood the evidence. I think, for instance, people who are against what is widely believed today about the quote-unquote the Holocaust, I think that people, those people conclude — the revisionists as they’re called — I think the most serious conclude that between two and three hundred thousand Jews perished in Nazi concentration camps, but not one of them by gassing in a gas chamber.

The revisionist he cites is Fred Leuchter, and his work has been completely debunked. But no matter. I think that we are looking at two peas in a pod when it comes to Papa Ratzi and Williamson, and that's perhaps where the sympathy lies in the decision to lift the excommunication.

Look at his views on women and gays; they are below the fold. Jim continues with a look at Williamson's enlightened view of women:

Williamson’s newsletters are a treasure-trove of paranoia, nutty conspiracies and general all-around lunacy. Williamson argues that women should not wear trousers and that “almost no girl should go to any university” because doing so contributes to the “the unwomaning of woman.”

...He has even criticized the movie The Sound of Music because of how it portrays those “nasty Nazis” and elevates “self-centered” romantic love. His views on gay people, engaging in a sin “crying to Heaven for vengeance,” are all too predictable.

And well, the homos, as usual, get treatment from Williamson that doesn't fall far from the Benedict tree:

God did not wait for the founding of the Catholic Church to instill in men the horror of this sin, but he implanted in the human nature of all of us, unless or until we corrupt it, an instinct of violent repugnance for this particular sin, comparable to our instinctive repugnance for other misuses of our human frame, such as coprophagy.

No. He did not go there. Being gay = sh*t eating. Does the Vatican have any comment on this? It's no wonder that so many young devout gay Catholics are full of self-doubt, despair, and commit suicide. With Williamson now a Catholic in good spiritual standing after Benedict having restored him to flock, what must gay and gay-supportive Catholics read into that support? Williamson leaves no doubt where he stands:

Therefore to speak of homosexuality as an "alternate life-style" is as perverse as equating the violation of nature with its observance. It is as foully corrupt as to make no difference between recognizing God the author of nature, and defying Him.

Therefore what is "innate", or in-born, in human nature concerning homosexuality is a violent repugnance. Therefore to speak of homosexuality, or even just an inclination to it, as being "innate" in certain human beings, of course to excuse them, is to accuse God at least of contradiction, if not also of planting in men the cause of sin, which is implicit if not explicit blasphemy.

Wow. This Pope, and whoever is advising him, if they have any sense of decency, need to explain this propping up of this PR nightmare. I'd love to hear Williamson's views on the raping priests (and enablers) in the church.

Will that be broadcast on the brand spanking new Papal YouTube channel?

* Pope welcomes 'holocaust denier' back to the fold (BBC)