The price of sanctimony addiction 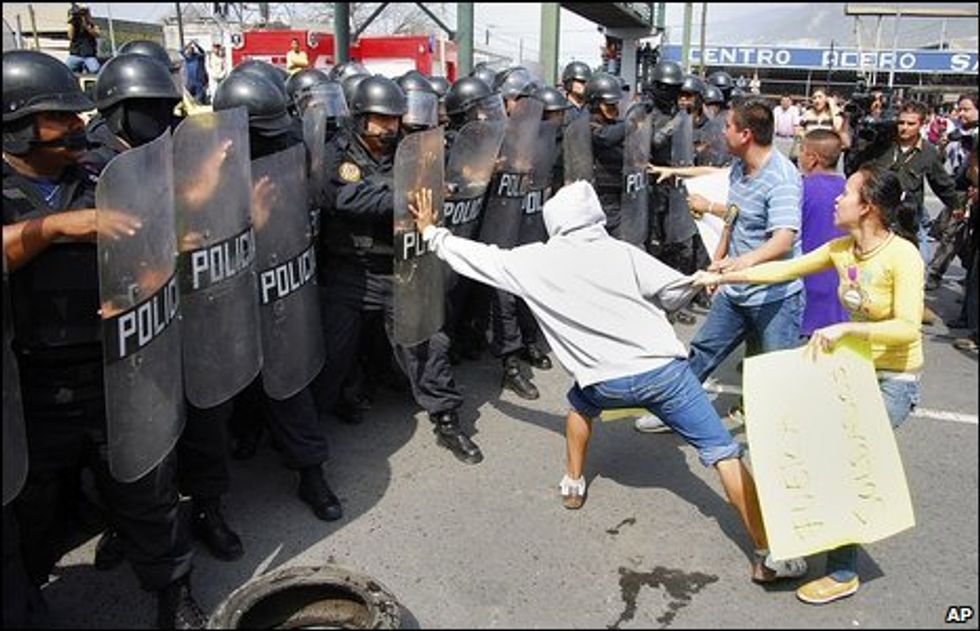 Here's a story I rarely see much about on blogs, even though it seems to me that it goes into the file "Big Fucking Deal". There were a bunch of demonstrations on the border in Juarez, Nuevo Laredo, and Reynosa Tuesday, and more in Monterrey, all blocking traffic in some form, but in the border towns, they were blocking the bridges into the U.S. So, in my mind, it's a ploy to get some American media attention to a story that's flying mostly under the radar, and I suppose it worked, because my mom told me that they were covering it on Fox News. (And, in the grand tradition of grabbing every opportunity for racist hysteria that they get, it seems they were implying that the protests were riots.) It doesn't seem to take a lot of people to snarl traffic across the border---only 30 people, mostly women and children, were able to stop traffic for an hour on the Paso del Norte bridge, which I remember as being already a site of dead stopped traffic in the days before 9/11 gave them further excuses to beef up "security", and so my heart goes out to the innocent people, many who commute across that bridge every day for work, stuck in what must have been the mother of all traffic jams.

What they were protesting was the presence of the military all over the area to police the area. Occasional bouts of unofficial martial law are far from unknown on the U.S.-Mexico border, though they don't get much attention from the mainstream media. Alas, it's not that easy to separate the villains and the heroes in this story, because while martial law, official or not, is one of those human rights violations that we strive as an evolved species to avoid, the Mexican government has a mother of all problems on their hands, and it's hard to fault them for trying to fix it. In this case, the ongoing war between drug cartels in Mexico has grown especially hot in our troubled days, and the year 2008 saw at least 6,000 murders related directly to the drug trade.

More than 6,000 people were killed in drug violence last year.

Since we are talking the billion dollar drug cartels of Mexico, we're talking about murders of the most gruesome sort, most noticeably involving beheading. 6,000 people is a hard number to wrap your head around, but it's huge, and it's therefore understandable in part that the Mexican government is bringing in the military to shut this shit down. And they're not backing down, which makes me worry that this is going to add another layer of chaos to an already-bad situation.

Human rights groups are pointing to the inevitable abuses of martial law---arresting and shooting civilians, amongst other abuses of power, and that's a legitimate issue, and so I can't fault the protesters for pushing back. But no story I could find said anything but same groups also don't know who organized the protests. Meanwhile, the Mexican government says that the cartels themselves organized the protests. I'm automatically suspicious of these claims, because the government's first step in pushing back against protesters in any situation is to claim that they're criminals. But then again, I wouldn't put it past the drug cartels to do such a thing, and we are talking about the perfect economic conditions for that sort of exploitative employment. It's all very confusing.

Compare and contrast the levels of outrage Americans had for these two different yet related stories: 1) Michael Phelps smokes some weed, hurting absolutely no one and 2) this:

A shootout in a border city that leaves five alleged drug traffickers sprawled dead on the street and seven police wounded. A police chief and his bodyguards gunned down outside his house in another border city. Four bridges into the United States shut down by protesters who want the military out of their towns and who officials say are backed by narcotraffickers.

The latter story would, in a sane world, be the one that matters more and generates more outrage. But it is the story that requires we Americans to actually take some fucking responsibility for the hell we unleash on countries that are supposed to be our friends and neighbors, like Mexico. The remarkable thing about the Phelps story is that most of the people viciously condemning have probably smoked weed and aren't sorry about it. But they enjoy getting into a sanctimonious snit over the evils of drug use, so they don't let that kind of hypocrisy bother them. Unfortunately, our national hypocrisy about drugs is super-deadly on the Mexican-American border. That is, after all, why this war is going on---to control the trade routes to get drugs to Americans using criminal methods because drugs are illegal in America. (And Mexico, too, but they appear to have more of an export issue than an import one.) To really face this story would be to face what we don't want to---either everyone who uses drugs stops, or we give up the War On Drugs. Only one of these is realistic. And while we have plenty of drug addicts in America, we have even more sanctimony addicts who need their fix.

Pastor and Hakim note that the United States helps fuel the violence, not only by providing a ready market for illegal drugs, but also by supplying the vast majority of weapons used by drug gangs.

Pastor says there are at least 6,600 U.S. gun shops within 100 miles of the Mexican border and more than 90 percent of weapons in Mexico come from the United States.

It leads me to wonder if there's any research in whether or not lobbyists for the gun industry fight to keep drugs illegal, since they profit so handsomely off the War On Drugs.