NC: The wicked witch of NOM blows into town...

I thought I smelled a foul wafting in from Wilmington -- it was Miss NOM herself, Maggie Gallagher. Her Tweet: 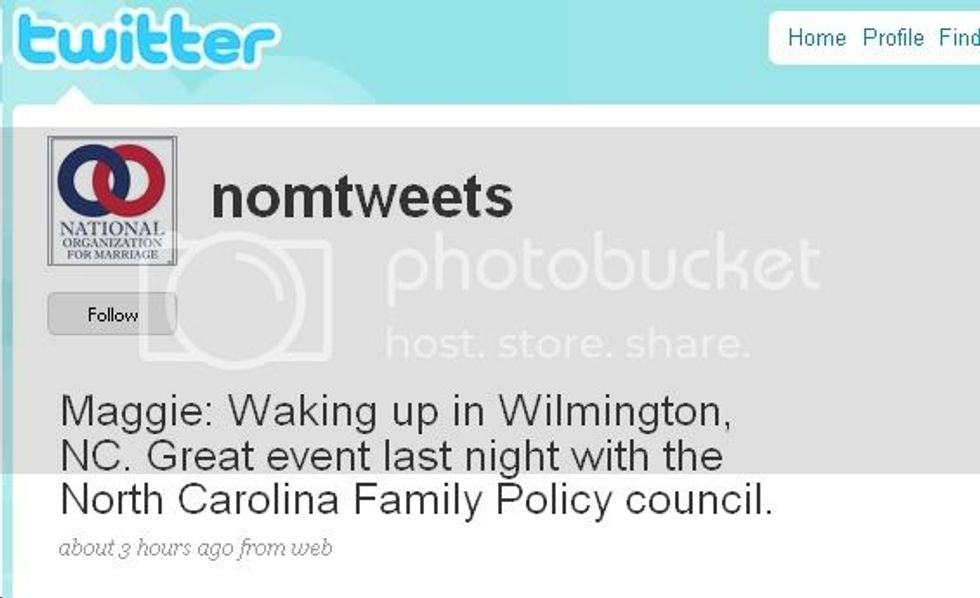 Meeting with the wingnuts and bible beaters at the NC Family Policy Council can only mean bad, batsh*t news.

Some entertainment -- from the NC Family Policy Council's document "Why Not Same-Sex "Marriage?"" -

Marriage is said to be primarily about love and commitment.

Same-sex marriage should be allowed because marriage is about love, and homosexuals love each other as much as heterosexuals. Marriage is how society affirms a decision lovers make to care for each other through good times and bad.

Same-sex partners love each other as deeply and sincerely as heterosexual partners. Love defines marriage because marriages run on love, and allowing same-sex lovers to marry is more consistent with what marriage is for than restricting marriage to heterosexuals.

The Response: This argument confuses a valued (but not a necessary) motive for mate selection with what qualifies marriage to be recognized as a social institution. Love should characterize how married partners treat each other, but love is not what structures marriage and is not what warrants public interest in affirming marriage. The public interest in marriage relates to how it moves toward bridging the male-female divide, toward favoring procreation, and toward parents setting aside individual satisfaction to cooperate in raising children.

Denying the procreational form of marriage is like denying cars are designed to drive. Cars can be cars without being driven, but denying cars are designed for driving changes a "car" into something else. In the same way marriages can exist without children, but severing procreation from the marital structure turns marriage into something else. The argument above confuses the "form" (i.e., those aspects of marriage that are necessary to make marriage, marriage) of marriage as a social institution with an "accident" (i.e., an aspect of marriage that can change without changing what marriage is) in how some couples perform. In this argument, the "form" of marriage is inherently procreational, and procreation can only naturally occur with a man and a woman. Infertility in this context does not change the nature of what marriage is, since (1) the couple are paired in a way that was designed to lead to children (i.e., a man and a woman), and (2) their infertility does not change what marriage is for other married couples.

In other words, this argument uses accidental similarity (infertility) to justify formal equality (that same-sex and opposite-sex couples are no different), and wrongly rejects a formal difference (procreational and non-procreational forms are not the same) as just an accident (i.e., it would make no formal difference).

Proponents of same-sex marriage are thus actually trying to change marriage into non-marriage by denying a fundamental and unchanging aspect of the nature of marriage. While they may still call this union "marriage," it is in fact something else entirely

Read more drivel below the fold. It's worthy of keyboard protection. And this one...

9. We shouldn't "write discrimination" into the Constitution.

Marriage laws should treat human sexuality in a neutral manner and should not prefer one sort over others. Sexual attraction leading individuals to unite is a private matter others cannot assess, and marriage simply gives public recognition and support for the couples making relational commitments. But since attractions can be homosexual as well as heterosexual, and since no one other than individuals themselves can know the strength and quality of what draws partners together, justice requires that civil law take a neutral stand and permit couples to marry however they feel drawn to unite.

Until homosexuals are allowed to marry, weddings are heterosexual rituals of the most repressive and repugnant kind. They say that discriminating by sexual orientation is sanctioned by law, that homosexuals are people who deserve to be ridiculed, made fun of, despised, and perhaps even bullied or killed. But allowing same-sex marriage will transform weddings from symbols of heterosexual oppression to symbols of approval and equality.

This argument depends on thinking society already denies having any public interest in marriage except as a way of respecting whatever draws people into sexual relationships. And if that is the case, it follows that (1) only those concerned can assess the presence of their attractions, and (2) society can only affirm whatever attractions people have with no just basis for treating any differently in relation to the interests of society as a whole.

But it is unreasonable to think there is no public interest in maintaining the procreational structure of marriage, and to believe there is any public interest in how marriage is structured except to affirm whatever attractions people have. If so, pedophiles would be married to children, necrophiles to dead bodies, pornophiles to pictures, and exhibitionists to strangers. And marriage law would have no way of treating any of these differently. But society does, and should, make distinctions that exclude all sorts of sexual attractions from qualifying for marriage, and it does this not by evaluating how anyone feels but only by evaluating how relationships fit public interest in supporting an institution structured to keep men and women together long enough to raise children.