What will marriage equality supporters do during the Prop 8 rallies?

UPDATE: And as you already know, the CA Supremes upheld Prop 8, but those who were married in that small window while same-sex marriage was legal (about 18K), will remain married. A copy of the ruling is here. Predictable, because California's constitution affirms mob rule.

As we await the 10:30 ET official word on Sotomayor as the President's SCOTUS pick, and the 1PM ET ruling on the constitutionality of Prop 8, Here is a thoughtful piece by Christopher Geidner@ Law Dork. He discusses the forthcoming Prop 8 ruling by the California Supreme Court and the possible reactions in the LGBT and allies community if the ruling does not overturn it -- either by nullifying all the same-sex marriages or allowing the thousands of existing marriages to remain intact while still affirming Prop 8. He believes the Supreme Court will have the split decision. He also shares my concern that we have to worry just as much about misplaced anger turning into violence as we do from the right.

Assuming that outcome, which I believe is most likely, I’d ask — and hope our national leaders would ask — that we all take a breath before acting.  As, I wrote Friday, the decision to be issued today is a legal determination about the structure of the California Constitution and the procedures available to the people to amend it.  A fair and vigorous debate has been had about whether Proposition 8 was the type of change envisioned as an amendment or if it was a revision, which would require a more lengthy and difficult process.

The California Supreme Court, at least a majority of its justices, already has shown its support for marriage equality.  There can, thus, be no claim made that this court comes at the issue of gay and lesbian equality with anything less than good faith.

I understood — and participated in — rallies held across the country following the passage of Proposition 8.  I understood the stark awakening that the vote was for many young LGBT people and our allies.  I supported this rejuvenated “gay movement.”  We have seen the fruits of that awakening in Iowa, Vermont, D.C., Maine and New Hampshire, as well as in countless other states, cities and communities across the nation.

We must not let today’s ruling change that momentum.

Geidner reminds readers that this ruling is not about the merits or legality of same-sex marriage -- the same state Supreme Court is the one that decided gays and lesbians could marry. So what we -- or perhaps Californians -- should be angry about is a state Constitution that allows civil rights to be placed on a ballot measure.

More after the jump. And:

Even if there is some overriding federal claim that marriage equality is guaranteed by the U.S. Constitution, it was not raised by the parties here.

...we have spent the past decade decrying those who demean the legitimacy of court decisions by attacking them. It would turn that principled stand on its head to say that this court, which previously held that marriage equality was guaranteed by the California Constitution, is somehow responsible in today’s decision for “denying an entire group of people our civil rights.”

He's right. For most of us, we won't have our state legislatures to count on to give us marriage equality, and certainly not "the people" if measures like Prop 8 make it on the ballot -- our rights will be ultimately be determined by the courts (and the President, Congress, and SCOTUS). 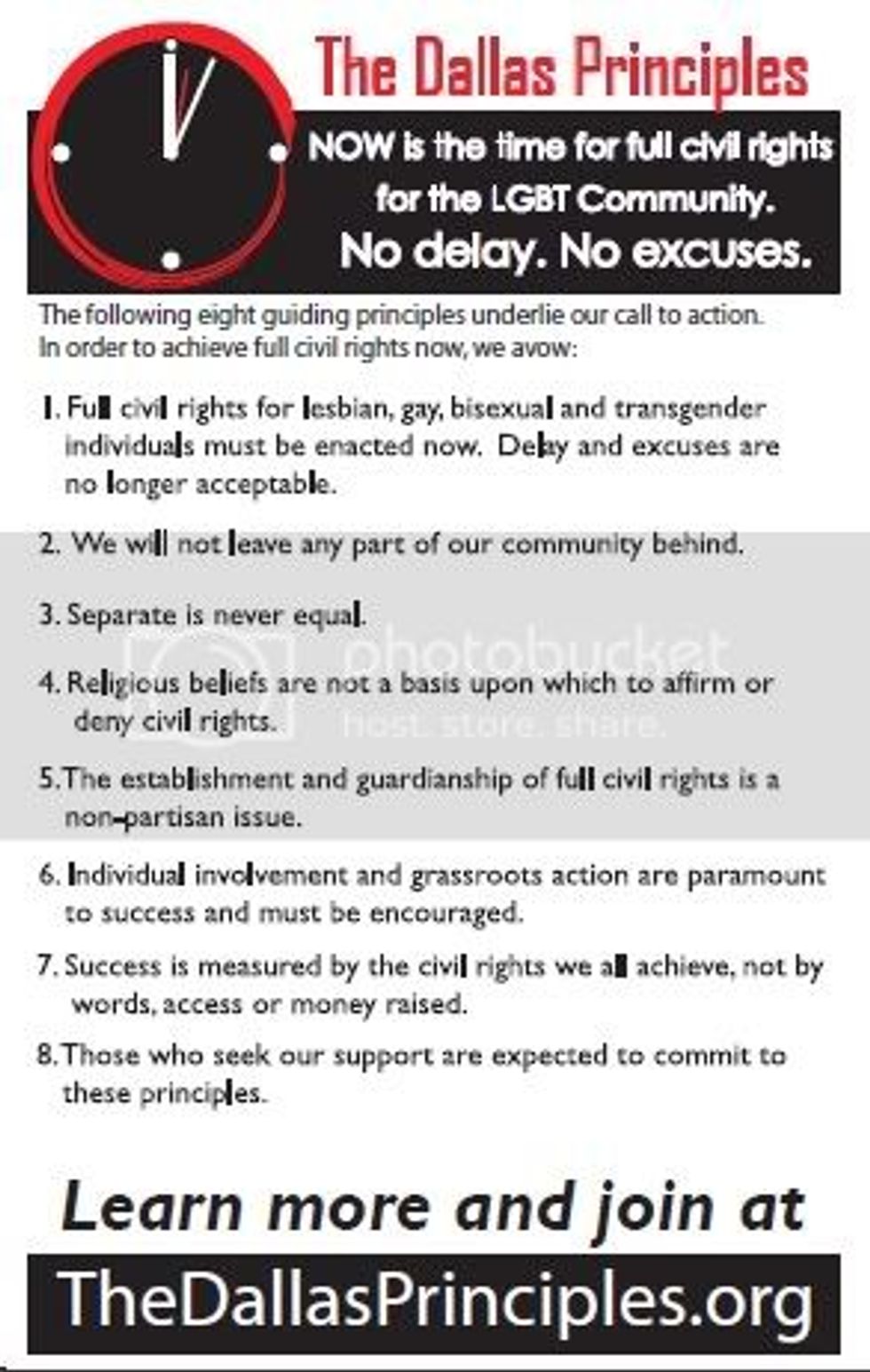 That said, if any or some marriages are nullified today, perhaps we can channel that anger in a positive way. I'm actually kind of skeptical that one can expect logical or rational reactions from angry people being denied civil rights by technicality, but one can try:

Rather than spouting anger at these rallies, organizers and speakers should be spouting information about legislative battles going on in their states and counties. The California rallies should be an opportunity to sign up marriage equality precinct captains all across the state, people who will be the local voices changing minds across that state.

For instance, a Blender suggested that people hand out a Dallas Principles flyer at these rallies -- ask and you shall receive. We do need to keep our eyes on the prize. After all, it's easier to motivate people to attend a rally out of anger or joy; it's unfortunately harder to get them to call their lawmakers or lobby their state elected officials to move the equality ball forward. The opposition however, has no difficulty getting people to call, write and show up at legislatures around the country on a regular basis.

There is also a postcard template available; download the front and the back elements.

* Orcinus: there may be a violent right-wing backlash if Prop 8 is overturned

* My video contribution in support of The Dallas Principles