All monkey ladies are prostitutes who get paid in not-currency 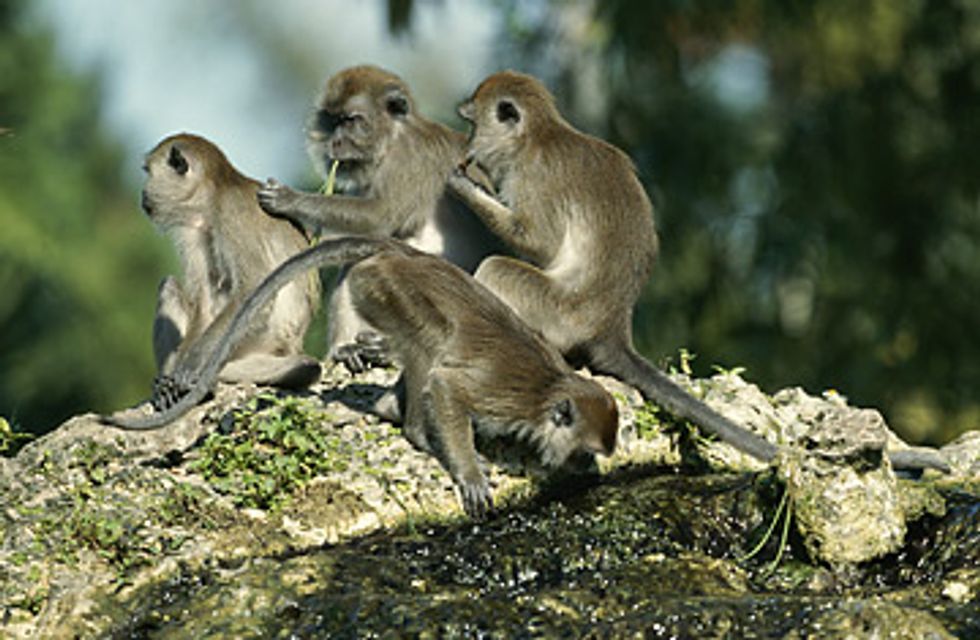 Matt Yglesias beat me to this bit of evo psych choadage, but since making fun of this stuff is my official beat, I'm taking it on anyway. As you are all no doubt aware, there's a lot of choadery disguised as science reporting in the mainstream press because it uses just-so stories to explain how every vicious sexist stereotype you believe is not only not bullshit, but etched into our DNA. This week, it's one of the top three favorites: Women are money-grubbing whores who only pretend to like sex to get at your wallet. There are enough men (and sadly, women) out there who need to believe this that they'll buy even the most ridiculous logic bending to get their way, which is exactly what's going on in this Time article.

It turns out that one of humanity's oldest professions may be even older than we thought: In a recent study of macaque monkeys in Indonesia, researchers found that male primates "paid" for sexual access to females — and that the going rate for such access dwindled as the number of available females went up.

Non-choads might immediately point out that the big news here, in monkeys are actually hiring prostitutes, is that monkeys have money, which is startling news indeed. Oh wait, they put "paid" in quotes. So what are the females exchanging for sex (because we have to assume that females don't have sex because they want to, amiritefellas)?

According to the paper, "Payment for Sex in a Macaque Mating Market," published in the December issue of Animal Behavior, males in a group of about 50 long-tailed macaques in Kalimantan Tengah, Indonesia, traded grooming services for sex with females; researchers, who studied the monkeys for some 20 months, found that males offered their payment up-front, as a kind of pre-sex ritual. It worked. After the females were groomed by male partners, female sexual activity more than doubled, from an average of 1.5 times an hour to 3.5 times. The study also showed that the number of minutes that males spent grooming hinged on the number of females available at the time: The better a male's odds of getting lucky, the less nit-picking time the females received.

Perfect. I can't wait until the anti-feminist screeds about how women are naturally stupid sluts start incorporating this new knowledge. Next thing you know, someone will be whining that gold-digging women are also demanding male "payment" for sex in hand-holding and kisses, as well as material goods. What's the going rate for physical affection? If we stretch this metaphor far enough, any woman who's gotten a mix tape and then slept with the guy who gave it to her is now breaking her local jurisdiction's prostitution laws.

The justification for the prostitution interpretation is this---this particular species of monkeys trades grooming for food and baby-sitting, which makes it a tempting metaphor for currency. But that's the danger in anthropomorphizing so quickly. I doubt the monkeys experience grooming like we do currency, particularly since grooming, unlike money, isn't something that can be hoarded or limited or stolen. This makes it so fundamentally unmoneylike that even "cutely" trying to draw comparisons is a bad idea.

And that's assuming there's something cute about this. The narrative about how all women are whores isn't a cute one, but causes real pain to both men and women. The assumption that women are sex (but don't like sex) discounts the various ways that women have to compete for sexual partners and attention, just like men have to. Which means that all the work that women put into their physical appearance and other sexual displays (including mix tapes!) is treated not like effort at all, but just wallpaper. That sort of erasure of women's efforts helps erase their desires, and when you've taken women's subjectivity out of it like that, it becomes very easy to believe that they don't have a right to say no, especially after men perform the correct sequence of behaviors, the number of nits picked, as it were.

Or, to put it another way, this reinforces the damaging narrative that men are the ones who do all the striving and desiring. Which in turn means that women are expected to give up the pussy after a certain number of flowers/dates/whatever are produced from men, because sex is a service women provide to men, which means that it should be provided when the payment is produced. This narrative is bad for women, but it's no walk in the park for men, either, because if they want to get laid but have the wrong model to approach the situation, they're going to be frustrated. God knows I don't like it when I put cash in the vending machine and the soda doesn't come out. But if men get away from the "all women are prostitutes" mentality and see sex as a collaborative way to spend time with someone you like---much like playing a game together or going to see a movie---they'll have a better idea of how to go about making that happen for themselves. And be happier with the women they date.