Sorry for being MIA in the pandasphere; I've been on the road for the last few days, first in New York to attend the Women's Media Center Media Awards. [I returned to Durham last night and in a couple of hours and I head to Chicago to be a panelist at Blogging While Brown.] Oy. I need s-l-e-e-p. Did I ever tell you all that American Airlines sucks (and I have to fly it again today)?

Anyway, it was a wonderful night at the first Women's Media Center Awards, I was honored for my contributions to online journalism/new media, along with Rebecca Traister of Salon.com. The event was held at the Arthur M. Sackler Foundation and the room was packed with people excited to see so many accomplished women receive their due:

Bonnie Erbe (To The Contrary)

Abigail Disney & Gini Reticker (Pray The Devil Back To Hell)

The awards were presented by WMC co-founder Gloria Steinem along with Carol Jenkins, the president of the org.

I'm still bowled over to be recognized for my work; it's a labor of love and certainly not a lucrative endeavor. I mentioned in my thank you speech how I am the only honoree who does this reporting/commentary and activism in my spare time, since I have to put a roof over my head with a full time job in the "real world." I actually managed to make it through my off-the-cuff speech (I only had a scrap of paper with the people to thank on it and winged the rest). I thanked my fellow baristas by name -- and for all of you out there, lurkers and commenters for making this community more than just my ramblings. It was also important to thank the WMC for recognizing the importance of new media/citizen journalism -- and women making a difference in this realm. Naturally I thanked Kate for her eternal patience as a "blog widow", Tim for providing support and advocacy for our civil rights and just being there; and my mom, who passed away in 1997; she didn't live to see how Tim and I have thrived professionally, but she laid the foundation -- stressing the value of education and hard work that kept us out of trouble back in the day, when too many young people in the "hood" in NYC were falling prey to crack, bad schools and broken homes after we moved north as children of an onerous divorce. Oh, and I eviscerated the Obama administration re: the heinous DOMA brief as well -- when you see the video, people responded to that. Everyone I spoke to in the room was PISSED about the arguments and hateful language in the brief -- White House, DNC, are you listening?

The transcript is below the fold. 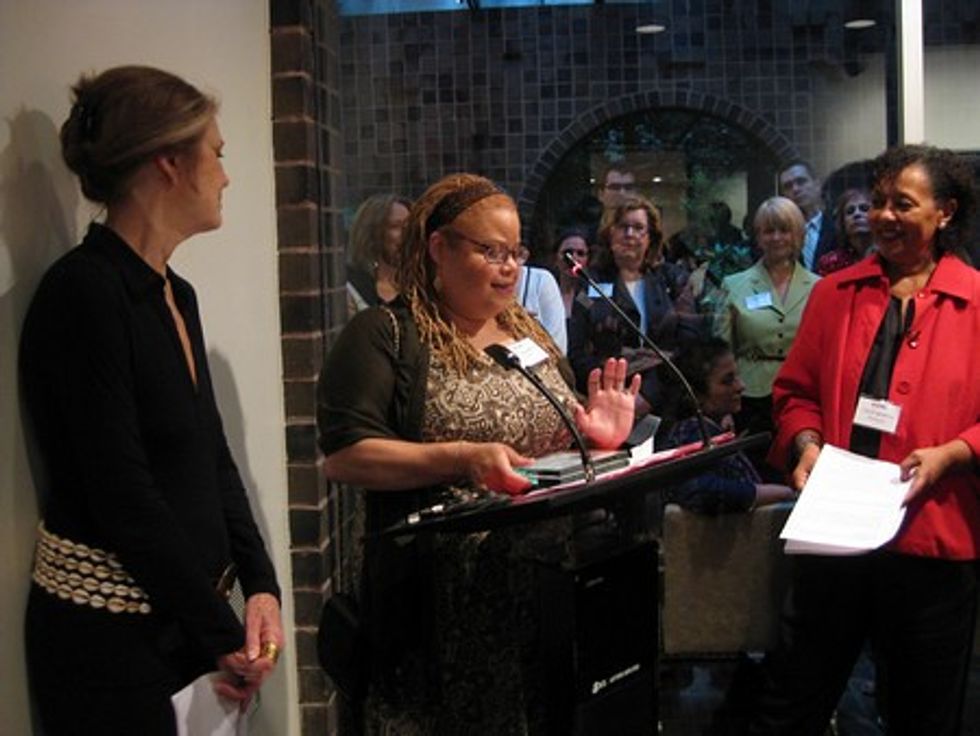 Carole Jenkins: ...Democratic National Convention. Pam received the 2006 Distinguished Achievement Award from the Manatt Horowitz Trust for making signifigant contributions in the eradication of homophobia, and she provides essential journalism and conversation. Pam, where are you, you're fabulous...

Gloria Steinem: Pam, this is to you for creating a website that gives the LGBT community a strong and sightful voice and a center of action.

First I want to thank the Women's Media Center, Gloria and Carol; I can't believe that when I got this email, saying that I was going to be honored... I was like, "why?"

And I think what is most heartening is about being recognized for this award is because it's about new media. This is a catagory, a much maligned catagory, of 'journalism slash commentary, original reporting and muckraking' and we do alot of it at the Blend.

Obviously, same-sex marriage is in the news, and I'm giving the Obama administration hell right now on my blog. The last week has been exciting, to say the least.

I think that a couple of bloggers and I have made it, alot of pressure on our core advocacy organizations like HRC, to do the right thing and come out strong in making it clear that thate brief on DOMA was outrageous.

But I also want to recognize my readers; without my readers, I am just another voice out in the wilderness on the digital space.

I want to thank my co-bloggers; I had to write them down to remember them because I have so many of them now: Julien Sharp, Russ Bellville, Daimeon Pilcher, Terrence Heath, Louise and Lurleen, and I want to give a big shout-out to Autumn Sandeen, who is breaking new ground as a transgender blogger and advocate.

She covered so many issues that it was necessary for me to include her on my roster and it brought so much gratitude from a community that is fighting desperately for rights, and I'm glad we're getting noticed for that, too.

I also want to thank my ever patient wife, Kate; she is a 'blog widow', because I am probably the only honoree tonight who is being honored for something I do in my spare time.

Kate, I love you; I love that we are married right now, as we're standing here in New York...

We celebrate our fifth anniversary on July first, and we are about to return to our home in North Carolina, where we have no rights whatsoever.

So we're gonna work really hard, at our state level, to do what we can.

And to wrap, I want to thank my brother Tim, who has been with me through times thick and thin, from being nearly homeless for a time, and to my mom, who has passed away.

Reading, from the time we were just out of the womb, she never- she always believed in us, and we always had the intestinal fortitude to go on, even in times of adversity, and Tim, you know we have that bond and we'll never lose it and I am just so grateful for everything. Thank you.

Carol: I think we better stay on Pam's good side...

MIA that evening were some of the recognizable names of women who were also honored -- Rachel Maddow, Tina Fey, Dolly Parton and Christiane Amanpour. But those who were there tonight are strengthening the role and visibility of women in the media in their own significant ways and it was an honor to be among them. I spoke with Candy Crowley of CNN and discussed what life was like on the campaign trail for her during the 2008 election year. She said that at one point, she only managed to make it home for two days every couple of weeks. That's insane. I don't know how she did it.

If you want to see how the WMC Media Awards was Tweeted in real time, click here.

Thanks to American Airlines, I didn't get to spend any time with my NY relatives, so Kate and I will head back in July for a proper visit.

Below are some photos from the event; here's a slideshow.