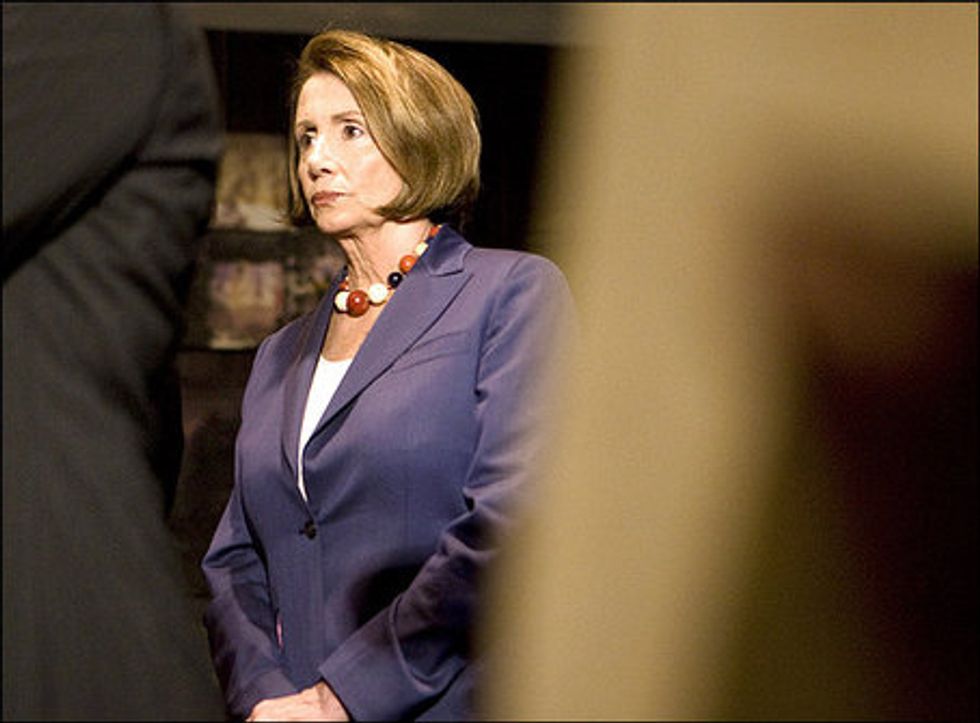 If you want to depress yourself this morning---and hey, being a political blog reader means you're not against the idea---please compare and contrast this interview with Nancy Pelosi about health care reform and this write-up of Obama's press conference. Obama's lack of enthusiasm on this issue is depressing on a personal level, since he's obviously such a fan of American values like ingenuity and self-improvement, and styles himself (rightly) of a prime example of someone who set out to accomplish great things and achieved it in a classic American fairy tale style. He should be the one who sees that health care access is one of the major obstacles for others who are trying to set out on their own path as he did. He should be the one who sees that the great sea of American ingenuity is being stifled, because employers are able wield the need for health care to get meek obedience instead of daring out of the American labor force. The ability to work for someone else for the Malcolm Gladwell-esque 10,000 hours and then strike out on your own as an innovator and entrepreneur has been snatched from people, because the only people who can count on having good enough health and minimal family obligations to take chances with health insurance coverage are really young people. The irony in him dwelling upon his excellent coverage is this---to get where he is today, he had to start taking the sort of employment risk (running for office) that most people his age really can't afford, unless they have a spouse like Michelle Obama who can extend coverage to them.

Now that the Villagers are rubbing their hands in glee over the presumed demise of health care reform, we're in real danger. The media has a lot of power to kill this thing, to take falsehoods about the imminent danger to the bill and turn them into realities, by empowering conservative Democrats who are desperate to please their lobbyist masters. It's not hard to figure out what the punditry's motivations here are---they're super eager for a replay of the early Clinton years. The defeat of health care reform, the turnover of congressional power to the Republicans in the next election, and then it's all gravy for them. Democrats are tedious with their policy discussions and their interest in maintaining a civil tone in Washington. Republicans, though? Republicans are where it's at for the punditry. No more boring policy discussions. No more polite behavior and lack of comically awesome illiterate Bible-thumping ignorance. If they could just get another turnover of power to the Republicans in 2010, then we're in for hopefully another 6 years of obsessive right wing attempts to bring down the President, just like we got in the Clinton years, but on steroids, because if a hillbilly from Arkansas is considered an illegitimate President, then a black man doesn't have a chance of avoiding the foaming-at-the-mouth wingnuttery. I'm sure your average pundit trying to declare health care reform dead can't wait to be covering an impeachment trial over "birther" conspiracy theories instead of this stupid policy shit.

I am mollified somewhat by the fact that a lot of what's going on is procedural attempts to avoid a filibuster. Somewhat mollified. It would be a lot easier to rest easy if I got the sense the President is actually putting his best face forward to sell this plan and calm the public's nerves. Maybe Obama thinks that as soon as people get into the system and figure out that it benefits them, that will do the job for him. And he's right---if it passes. But I can't help but point out that with the media turned strongly against this, the battle to get this done has changed considerably.