Gardens for victory over Big Agra 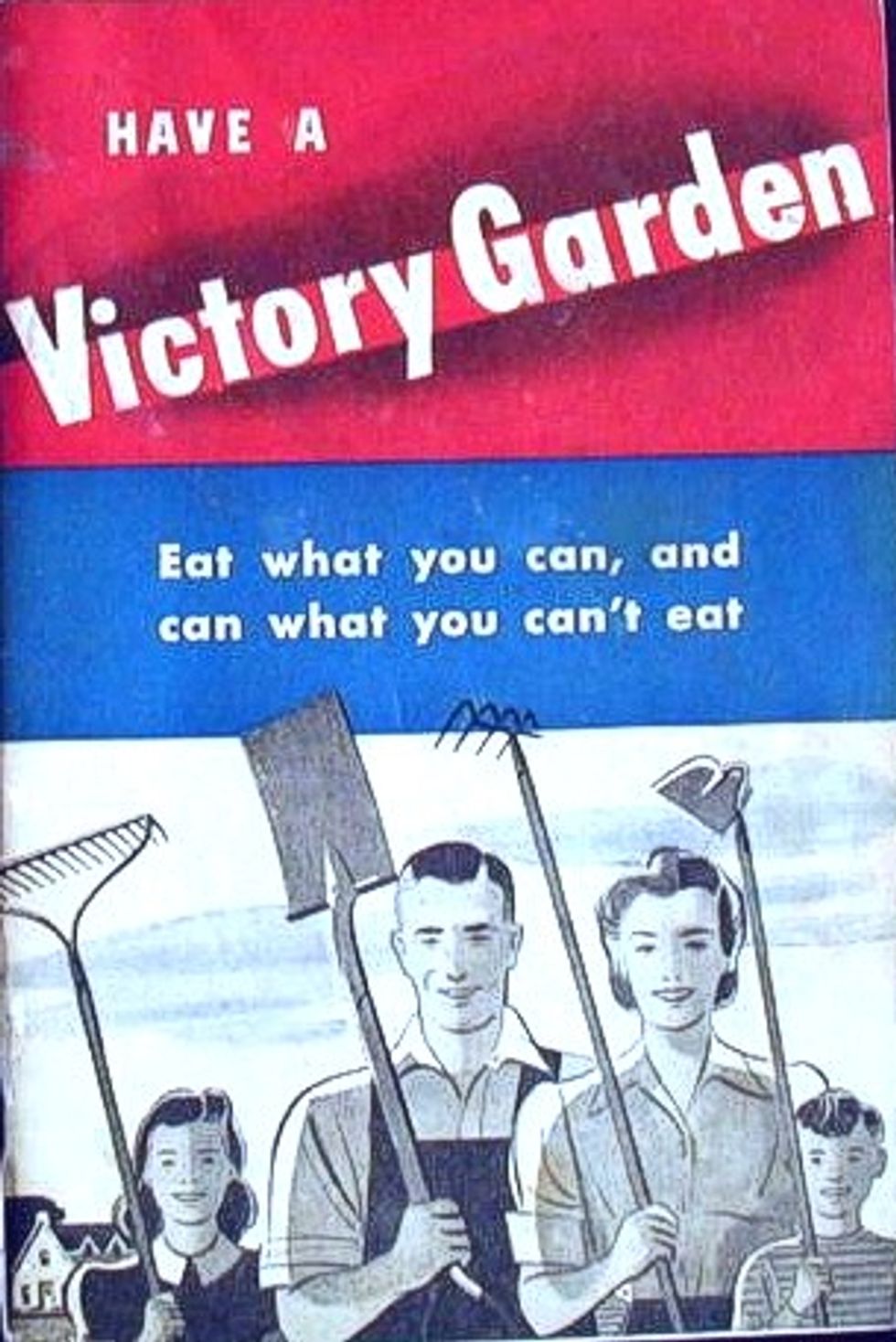 Trend watching alert: Salon has not one, but two articles up right now about the resurgence of gardening, particularly urban gardening. One is about the urban gardening trend itself, and one is about the giant organic garden at the White House that Michelle Obama has spearheaded. The explosion of interest in gardening is obviously due to converging trends---the growing concerns about sustainability and our screwed-up agricultural system, plus an economic collapse that has people thinking long and hard about frugality.

What's interesting about the trend is that it's not really certain that growing your own garden is necessarily going to save people money, as Amy Benfer notes. In the 1940s, Eleanor Roosevelt's push for people to start victory gardens was incredibly effective---up to 40% of all produce grown in the country was in victory gardens. Numbers like that would make one think that this resurgence would have similar results, but I think a lot fewer people (particularly the political foodie types that generally live in urban centers) have as much space to garden, and collectively, we have a lot less know-how. Of course, if people stick with it for a few years, they'll learn what works and what doesn't, and it will start to save them money. Of course, that requires staying put for long periods of time, which is also not so easy for modern urbanites.

Still, even if this is only a minor savings or a wash for a lot of people starting out, I still think that this trend is overall a good thing for people. First of all, gardening---even just if you grow your own herbs---encourages people to cook at home more, which is healthier and cheaper. Plus, it's a good place to start when it comes to finding ways to eat better overall. Even with Michael Pollan and Mark Bittman out there telling people that good cooking is easy, I think many people are afraid to start doing things like exploring the bulk section at the supermarket. I know I was, but gardening has this psychological effect on you. I dare say it's a genuine example of empowering yourself.

Just as the people who started victory gardens in the 40s likely had personal memories or even experience with growing their own food, modern Americans aren't that far away from knowing how to make meals from ingredients that they have to prep themselves. Nowadays, it seems like most chicken comes to you deboned, deskinned, and pre-sliced, but I distinctly remember that chicken in my childhood came to you in whole chickens that you had to dismantle yourself.* (I remember this, because my dad used to entertain us while he was cooking by shoving his hand up the chicken's butt and dancing it around the counter. We had no respect for the recently departed in the Marcotte household.) The point isn't that there was something morally pure about that or anything, just that preparing stuff that's healthier and more sustainable needn't be so intimidating. If your parents could do it, so can you.

Victory gardens weren't just a practical response to the food needs of a country that suddenly had a large army to feed and therefore had to find new ways to make sure there was enough for everyone. They were embraced at the time as a psychological strategy, because gardening is empowering. When national events are out of the control of the average person, but affects them all the same, people can really benefit from taking up an activity that's helpful and gives them some amount of control. Which isn't to suggest that this sort of thing is a substitute for real power. On the contrary, I think that if people start to see that they can make changes that seemed intimidating before they tried them, that can in turn encourage them to be a little bolder, more sure of themselves, and more entitled. The widespread social reform that happened in the wake of WWII is usually painted as something the powers that be did out of gratitude to the everyday people that saved their nations from the threat of fascism. But while there's probably something to that, I think that it's also relevant that the people themselves had weathered some seriously hard times, and everyone did their part, and when things got better, they felt capable and empowered, and the social reform from middle class creation programs in the U.S. to the formation of the NHS in Britain was a response to the mood of the times.

I don't know for sure what it was, but I do know this: Modern people feel hopeless, cowed, and defeated. A lot of us vote for Democrats, and then we stand by helplessly as they do awful things like bail out banks but don't do enough for the people that are the victims here. Increasingly, it seems like we're not going to get meaningful health care reform, but instead will see some huge bill passed that makes a few minor changes that will leave roughly the same number of Americans uninsured. Right now, I suspect the best many of us hope for is that those of us with insurance will have a little more assurance that they'll pay our bills, but even then, I'm not holding my breath. People are overworked, but are so completely out of options that they're finding ways to get us to work without wages. We're stuck with the system we've got, and because we don't have any other options, we're being abused by it.

Because of this, I'm really heartened to see this growing movement for real food reform, because seriously, our agricultural system is more ingrained than our banking system, and Big Agra is a real Goliath, completely heartless and fixated on grinding every last ounce of will out of the public. They've done a remarkable job so far. People want to be healthier, but they can't seem to manage it, in part because our food industry has made even knowing where to start remaking your life seem impossible. But with this gardening trend, I think people are finding the foothold. And hopefully they can turn it into something bigger.

*Of course, when I was in junior high and high school, my stepfather hunted, so not only did birds come with skin and bones, they came with heads and feathers. So maybe we were just behind the times, and my point has no relevance at all.