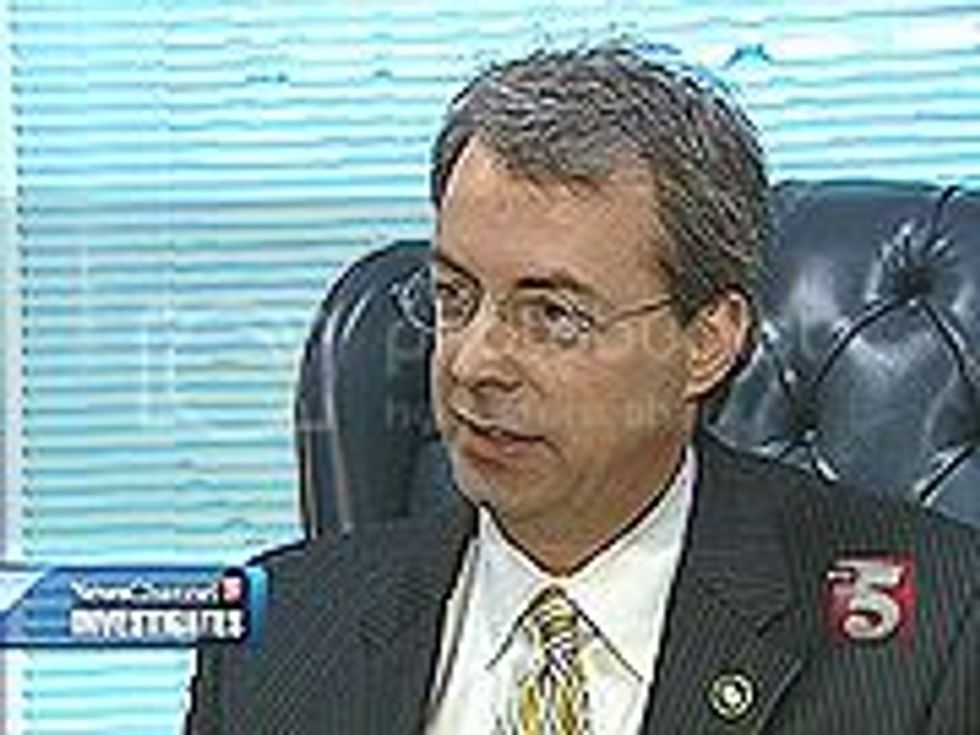 Did I mention that Senator Paul Stanley was a Republican? I'm certain that goes without saying now, the list of Republican Sexual Hypocrites is so damn long.

Anyway, in Tennessee, the very pious "opposite married" social conservative evangelical Christian state legislator with two children started knocking boots with his 23-year-old intern and well, her boyfriend found out about it and blackmailed the not-too-bright pol. What did he find that shriveled Stanley's boyz in terror? (Nashville Scene):

According to court documents, here's what happened: Stanley, who is married with two children, was accused of having an affair with a 22-year-old legislative intern, McKensie Morrison, by the woman's boyfriend. The boyfriend, Joel Palmer Watts. 28, discovered a computer memory disc with sexually explicit photographs of Morrison that appeared to have been taken in Stanley's apartment. Watts then blackmailed Stanley, demanding $10,000 in return for keeping quiet.

"Releasing the photographs to individuals or the media would cause embarrassment, both professionally and personally, to Stanley," according to the court affidavit, as if we needed an explanation for why this might pose a small problem for our family values champion.

Anyway, Stanley, caught with his pants down on camera and on digital media, went to the Tennesee Bureau of Investigation told them what was up and a sting was set up for Watts.

On April 9, 2009, Watts again contacted Stanley via text messages and demanded that Stanley meet him and pay him the money. Subsequently, a controlled delivery of $10,000 was organized and made to Watts. The delivery was made behind a El Rey Azteca Mexican restaurant, located in Whites Creek, Davidson County, Tenn.

..."When Watts arrived, he and Stanley exchanged the memory disc for the $10,000.00. Watts was taken into custody at that time. During a subsequent interview, Watts admitted to demanding the money from Stanley."

TBI agent Doug Long testified there were nude pictures of Stanley's intern, McKensie Morrison, of her posing "in provocative positions and poses." And it looks like Stanley, who has resigned as chairman of the Senate Commerce Committee in the wake of the scandal, was paying a bit of hush money in his office, based on this AP report.

Connie Ridley, director of legislative administration, says Morrison was assigned to Stanley's office but stopped being paid her weekly $350 stipend after the senator reported that she had stopped coming to work beginning on April 17. That would have been after this all blew up in Stanley's face.

BTW, this hypocrite Stanley told NewsChannel 5 that he will continue his social conservative legislative agenda.