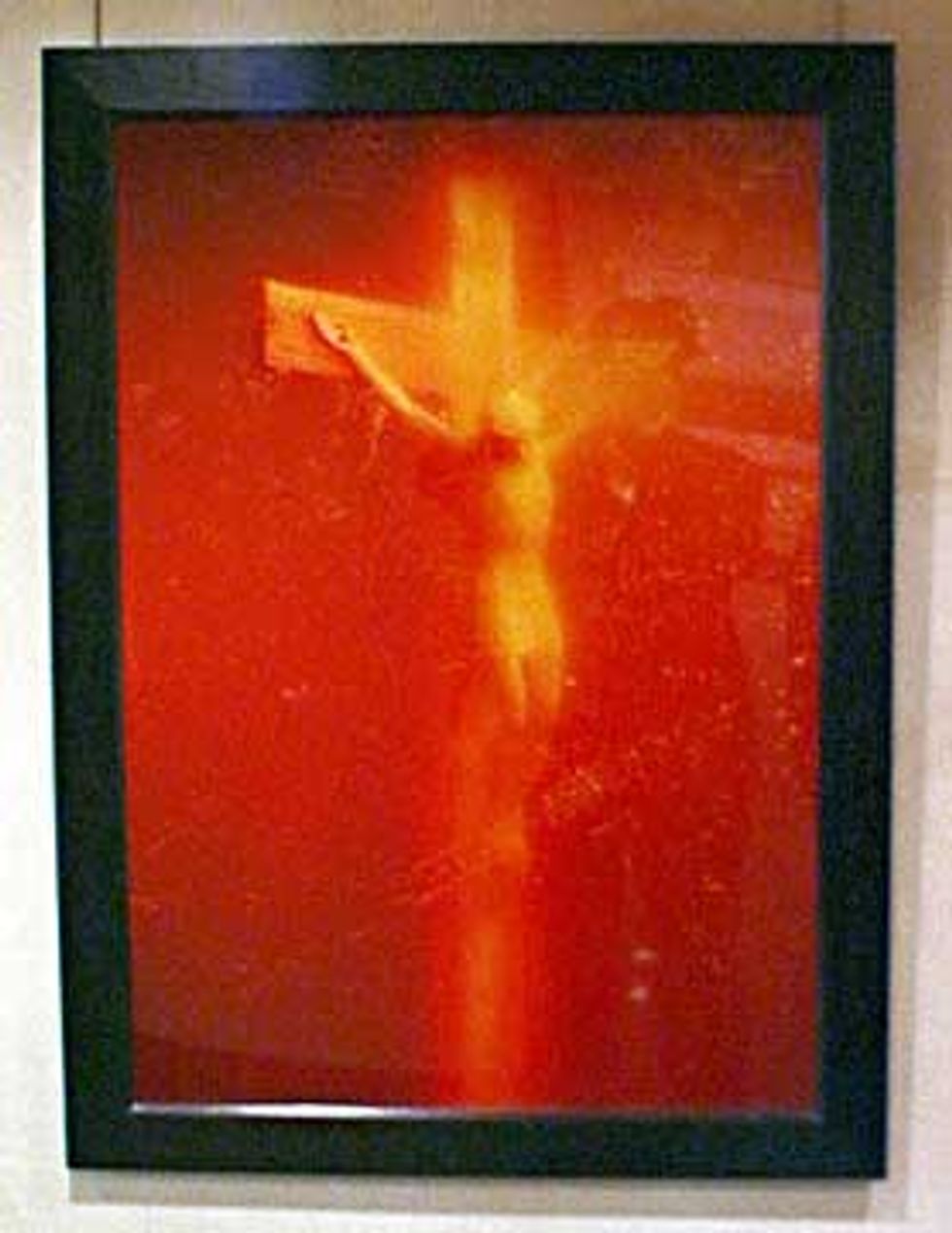 When it comes to disdaining artists---particularly when they don't paint realistic seascapes with Jesus doing something Jesus-y in the foreground or an eagle crying with a flag waving somewhere---there's really no limit on the adjective abuse from conservatives. (Via Michael, which makes me wonder if conservative accused WPA mural artists of being in league with Satan.) Let's face it. Conservatives are in a full blown depression over losing an election they thought was a sure win---because they assumed that most of America shared their how-dare-you-call-it-racism beliefs---and we all know what depression leads people to do: seek comfort in familiar things. A bowl of chicken soup while curled up in front of some cheesy 80s movie does it for the non-nutty, but wingnuts have different comforts. It's time to take out some old hates, dust them off, and try to make them seem new again. Hate and resentment soothe like mother's milk. Lashing out at people who don't suck as bad as you is a useful distraction from dwelling on your own nastiness. Hating the National Endowment for the Arts was fruitful in the 90s, so of course they're going back to see if that well has more water.

It probably does, of course. Hating on artists is the gift that keeps on giving when you're trying to pump up the base. Let's face it. If you're a wingnut, you're probably not the sharpest tool in the box. You don't get modern art. And all these people who do get it, who go to museums and plays and arty films and seem to understand what someone's talking about when they say "mise en scène", make you feel stupid. Sure, you could look that term up, do some reading, and if you actually tried to understand this stuff, it would make more sense. But that's work. And here's this demagogue saying that all those yapping smarty-pants liberals who like this art shit don't really, but are just pretending to so they can lord it over you.

(Sadly, this kind of thinking has extended beyond the circles of Nixonian resentment. Witness this video, which shames you for being a "hipster" for liking Sonic Youth and Wilco. They're not even trying.)

Demagoguing about artists getting paid to make art by the government is about the cheapest, easiest form of demagoguery. It taps multiple resentments at once: The jealousy of artists for making a living doing something they love while you're stuck with your boring job, the feeling of being left out by modern art that you don't understand, and the ever-changing nature of art that brings up the fear of change. Of course, stereotypes of what it's like to be a writer or an artist feed into this. The image, particularly the over-simplified one that filters out to the more sheltered types that make up the wingnut ranks, is of the artist as the bohemian. To be fair, there's more than a sliver of truth to the idea that creative people are more likely to be open to sexual experimentation, and more likely to fill their time with parties and interesting friends. They're creative! They think outside of the box, and that means they've got more practice bucking stifling social norms. But a lot of artistic types have boring old mom-pop-and-kids home lives, you know. And even people who live a little out of that box rarely have lives as exciting as the fever dreams of conservatives would have you imagine. And, at the end of the day, writing or making art is hard, often boring work, like any other work. And it's scary, competitive work. And artists who succeed deserve to get paid. And the government should invest in it, because having more art is good for us all. Yes, even the people who resent it. Once it's decades or even centuries out of date, they often come around to liking it and getting something out of it.

But what's interesting about this latest round of NEA demagoguery is that it's not so much about agitating because artists are getting paid while you have to sit at your desk filling out TPS reports. (And who says artists don't do a lot of that while trying to build a career?) No, this "scandal" goes as follows: the Obama administration, working with representatives from the NEA, had a conference call with artists where they discussed how the artists could use their work and their networks to reach out to people on health care reform. This isn't shocking, for a few reasons. The Obama administration has already had a lot of luck with the art community, since a lot of artists drew quite a bit of inspiration from the campaign, and specifically the overwhelming public reaction to it. This was explicitly noted during the call, in fact. This tactic of Obama's is far from unusual. He had a similar call with bloggers, for instance. It's really not surprising that this tactic is something Obama would be drawn to. Didn't Sarah Palin denounce him for being a "community organizer"? Well, that's what people who have experience in that world are really good at---finding out who the movers and shakers in a community are, and reaching out to them.

Thing is, they weren't even taking money to promote health care reform, which strikes me as a bare minimum before you start flinging the word "propaganda" around. I suspect the people on the call were on there because they're already sympathetic to the cause of health care reform. I suspect the vast majority of artists are, since they have to pay for their own health insurance, and are intimately familiar with being barred due to pre-existing conditions, or having to pay outrageous fees with no real guarantee of care if they get sick. That they weren't getting paid in money doesn't lower the ire one bit. They were getting paid in attention! In the 21st century, I suppose that's enough to drive wingnuts batshit with jealousy. Artists were told, with good reason, that they're influential in their community. How dare they have influence while wingnuts are seeing their own star falling, as more and more people realize that they're full of shit?

Of course, the Nazi crap started immediately. The first sentence in the first hysterical post on all this referenced Leni Riefenstahl. The thing is, Riefenstahl isn't a name that strikes horror into the hearts of film historians everywhere because she took government money to spread a government message. If that was all it was, then the Looney Toons would hold the same dishonored place in history. It's because she made such good movies about such deeply horrible things. The juxtaposition of greatness in form and depravity in content tends to get people's attention. Riefenstahl is really just the most prominent example, because the Nazis get the gold crown of most depraved government of all time. Most people don't get so worked up when encountering other art that expresses the government's point of view, from poets filling laureate duties to painters putting government-commissioned murals on walls. Americans aren't so invested in the idea of a strict separation of art and government that we spit on the ground when we hear "The Star-Spangled Banner". If you think that anything that even hints of propaganda is a bad thing, you're free to do this, but it's really the cherry-picking that's so offensive here.

I'm not suggesting that it's really that great an idea if the NEA gets into making genuine propaganda. In fact, that's always been my objection to wingnut ire at the NEA---up until this weekend, wingnuts were angry that the NEA is not a propagandistic organization, and that they give out grants based on merit. From Rudy Giuliani demagoguing about the contents of the Brooklyn Museum to all the anger about Robert Mapplethorpe, the argument from conservatives was, "Taking government money should mean an artist's work should be directed by the government to express a specific set of values defined by us." I imagine when this dies down, wingnuts will revert to bitching because the NEA isn't in the business of propaganda, and arguing that funding should be cut for all non-propaganda art.

The NEA does more than just give grants, you know. They are there to offer more general support for artists, and so it seems legitimate to me if the NEA helps set up a meeting with Obama and artists who share common goals. Which is all that seems to have happened here. If the separation of church and state doesn't prevent the President from reaching out to religious leaders, then there's no reason that the President shouldn't reach out to artists. There's no separation of art and state in the Constitution.