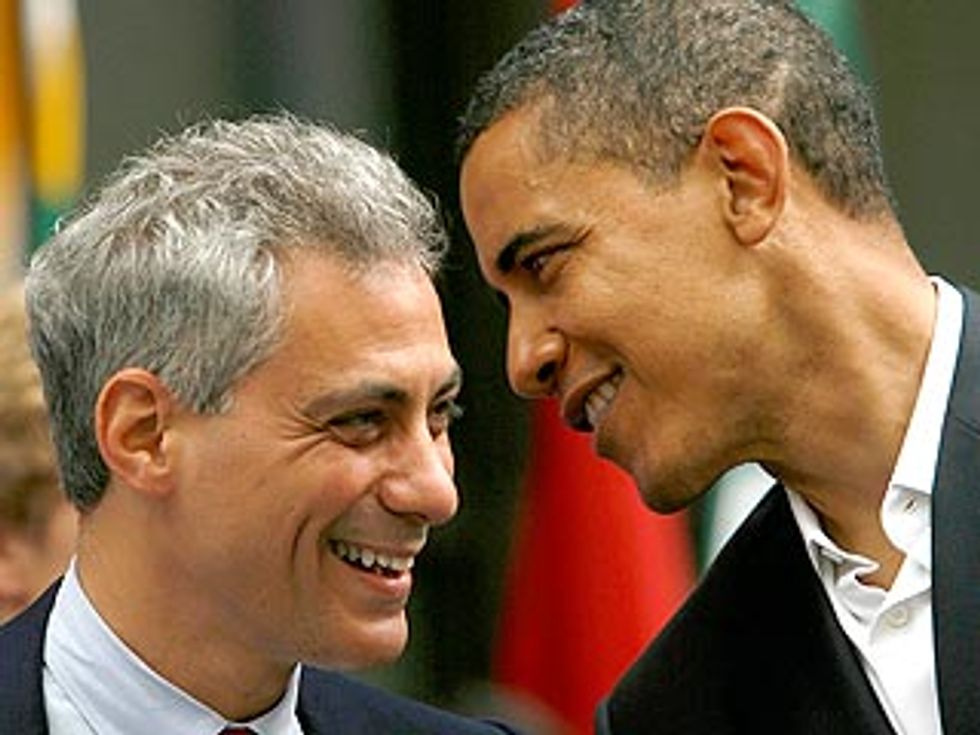 Conservatives have had it with President Barack Obama -- in the latest Gallup poll, he earned just a 23 percent approval rating from Republican voters. Liberal Democrats, meanwhile, have the president's back, awarding him an 88 percent backing.

But liberal support -- at least for the president's chief of staff, Rahm Emanuel -- seems to be waning. And Emanuel seems to be slapping back.

According to a report Tuesday in the Wall Street Journal, Emanuel told a liberal strategy group in August that a plan to run advertisements against conservative Democrats who were "balking at Mr. Obama's health-care overhaul" was grossly unwise.

"F—ing retarded," Mr. Emanuel scolded the group, according to participants cited by the paper.

"He warned them not to alienate lawmakers whose votes would be needed on health care and other top legislative items," the reporter said.

After a recent meeting between the White House and civil liberties critics -- among them, the American Civil Liberties Union -- the ACLU's executive director said he'd grown suspicious of Emanuel. ACLU director Anthony Romero said he believed Emanuel was more focused on politics than policy.

Romero asserted that he'd seen a shift since Emanuel became "consigliere at the White House," where he believes he's focused "less on the policy outcomes and more on maintaining a Democratic agenda that will keep the party in power."

"Everyone seems to be waiting around for the Chicago street brawler Rahm, because the one that showed up in the White House has little apparent fight in him," Markos Moulitsas of Daily Kos remarked. "Sure, he's quick to attack progressives when they criticize Obama or put legislative pressure on him from the left, but he's far too quick and happy to accommodate the Democratic Party's corporatist wing."

Ire at Emanuel has come so far that even a liberal blogger has teamed up with tax-hater and conservative darling Grover Norquist to call for a federal probe into his activities while at Freddie Mac.

"We write to demand an immediate investigation into the activities of White House Chief of Staff Rahm Emanuel," blogger Jane Hamsher and Norquist wrote. "We believe there is an abundant public record which establishes that the actions of the White House have blocked any investigation into his activities while on the board of Freddie Mac from 2000-2001, and facilitated the cover up of potential malfeasance until the 10-year statute of limitations has run out.

"The purpose of this letter is to connect the dots to establish both the conduct of Mr. Emanuel and those working with him to thwart inquiry, and to support your acting speedily so that the statute of limitations does not run out before the Justice Department is able to empanel a grand jury."

Emanuel's supporters, meanwhile, argue that he's just being politically pragmatic in an effort to pass the president's priorities.

"Rahm's approach, like the president, is not ideological. It's practical," Bruce Reed, chief executive of the centrist Democratic Leadership Council, told the Journal. "The administration's strategy has been to pass health-care reform, not die trying."