WASHINGTON -- Military leaders are expected to remain publicly silent about their personal political views. But it seems they aren't afraid to show their enthusiasm for policies they like -- or suggest their disapproval when they don't.

During President Obama's State of the Union Wednesday, the Joint Chiefs of Staff stood and applauded at various points but remained curiously silent when the president called on Congress to repeal the "Don't Ask, Don't Tell" law that prohibits gays from openly serving in the military.

"Those 'Neutral' Chiefs Of Staff," jested The Atlantic's Andrew Sullivan.

"It seems the Joint Chiefs are permitted to weigh in publicly during the State of the Union when they like what their Commander in Chief says. And they clearly didn't like what he had to say about making the Armed Forces less discriminatory," responded John Aravosis on AmericaBlog Gay.

"This year, I will work with Congress and our military to finally repeal the law that denies gay Americans the right to serve the country they love because of who they are. It’s the right thing to do," Obama said.

The Joint Chiefs sat quietly, nonresponsive, just as they did during Obama's declaration that the Iraq war "is ending, and all of our troops are coming home."

But as Joe. My. God. first reported, they weren't shy about showing their enthusiasm when veterans were mentioned -- or when Obama called for keeping nuclear weapons out of the hands of extremists.

The Joint Chiefs gave Obama a standing ovation when he said the following: "And at April’s Nuclear Security Summit, we will bring 44 nations together here in Washington, D.C. behind a clear goal: securing all vulnerable nuclear materials around the world in four years, so that they never fall into the hands of terrorists."

The following picture from the Web site shows their response: 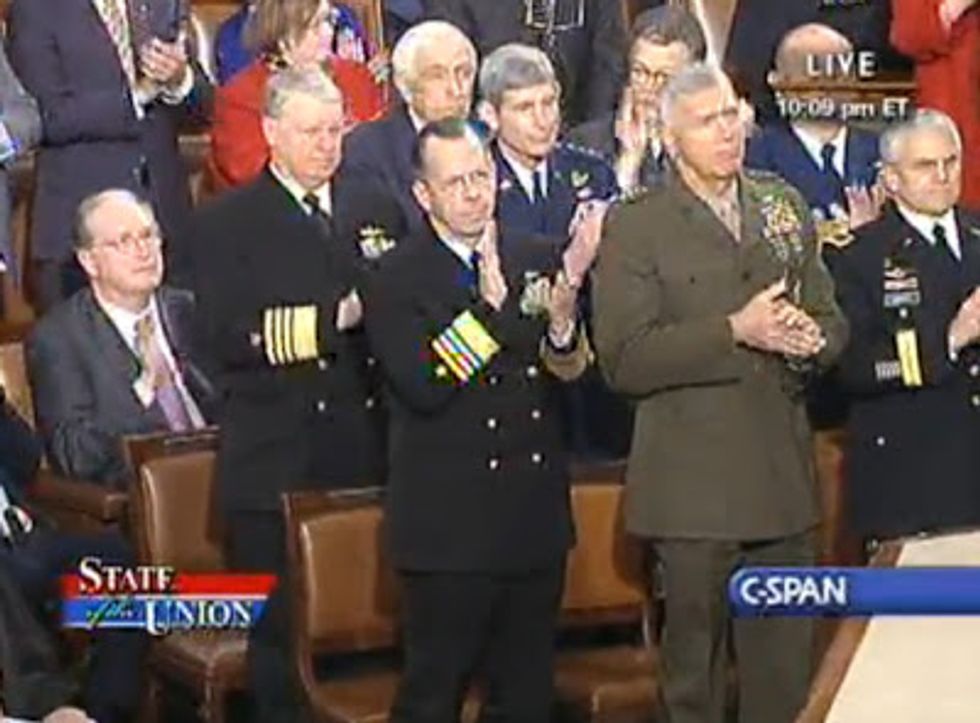 "They stood up and cheered when the President talked about taking better care of our veterens (Which I applaud, of course), so they do know how to do it," wrote one commenter named Lexi on the Joe. My. God. blog.