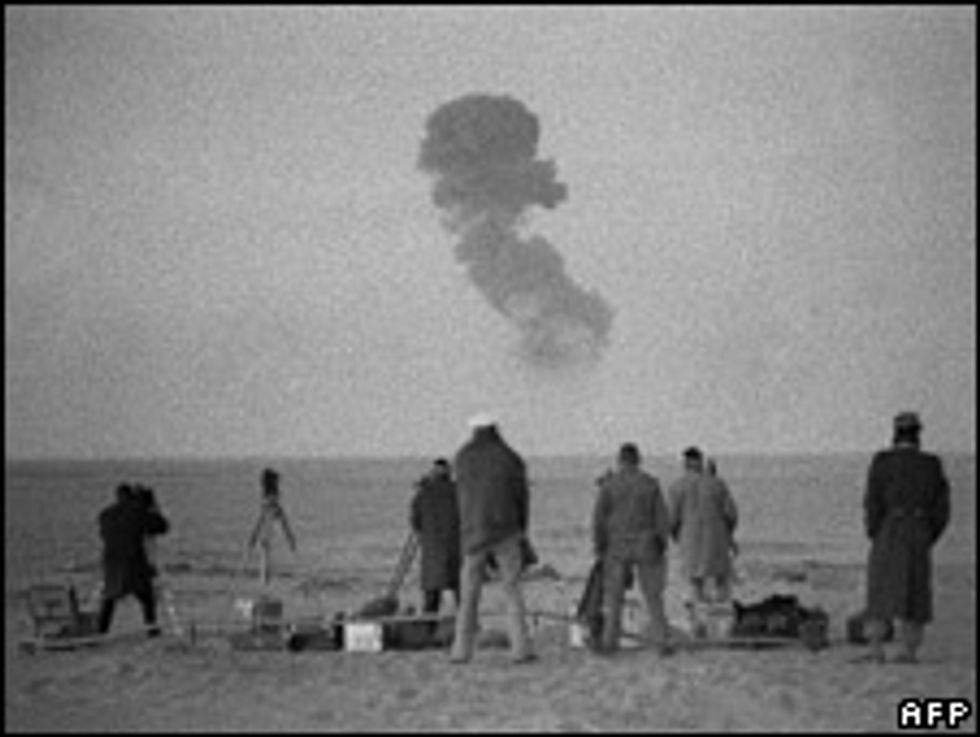 France used soldiers as guinea pigs in nuclear tests in the 1960s, deliberately exposing them to radiation from atomic blasts to test the effects, according to a report revealed on Tuesday.

The secret military report, obtained by AFP, said that between 1960 and 1966 France sent troops onto Algerian desert test sites "to study the physiological and psychological effects caused on humans by an atomic weapon."

One operation in 1961 involved military personnel advancing on foot and in trucks to within a few hundred metres (yards) of the epicentre of a nuclear blast less than an hour after detonation, according to the report.

The conscripts were given 45 minutes to dig foxholes in the contaminated desert earth, protected only by the military-issue boots, capes, gloves and simple face masks.

"It appeared from the results that at 800 metres from point zero and outside the fall-out zone, the combatant was physically able to continue fighting," the report said.

The tests aimed to help the military develop "physical preparation and morale training for the modern combatant" and teach soldiers how to protect themselves after a nuclear blast, it said.

France has allocated 10 million euros ($13.6 million) to compensate victims of nuclear tests in the Sahara and in Polynesia, but bitter political and medical fallout still lingers 50 years after the tests.

According to campaigners, children are still born with deformities in the irradiated Algerian desert, while in France elderly army veterans complain of multiple unexplained cancers.

AVEN, an association representing the troops exposed to the 210 tests carried out by France in Algeria and French Polynesia between 1960 and 1996, says it has gathered 4,500 testimonies from victims and their spouses.

"Immediately after the explosion, they said to us 'go and look at the result'," said one veteran, August Ribet, 74, who suffers from throat cancer.

"They gave us nice suits in white fabric which were no use at all, and a gas mask," he said, speaking to AFP recently. Ribet hopes one day that the courts will recognise him as a victim of the tests.

Defence Minister Herve Morin told AFP he would ensure "transparency" concerning the levels of radiation in all of France's nuclear tests.

The report by unnamed military officials dates back to 1998. Morin said that in 2007 the defence ministry made a summary of the findings of what he described as "tactical experiments" in Algeria.